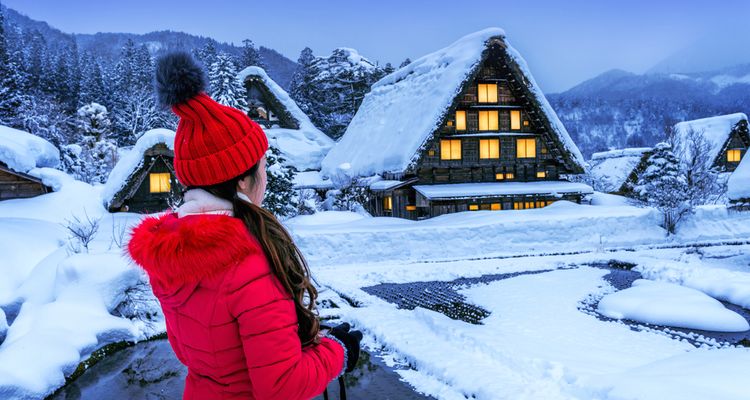 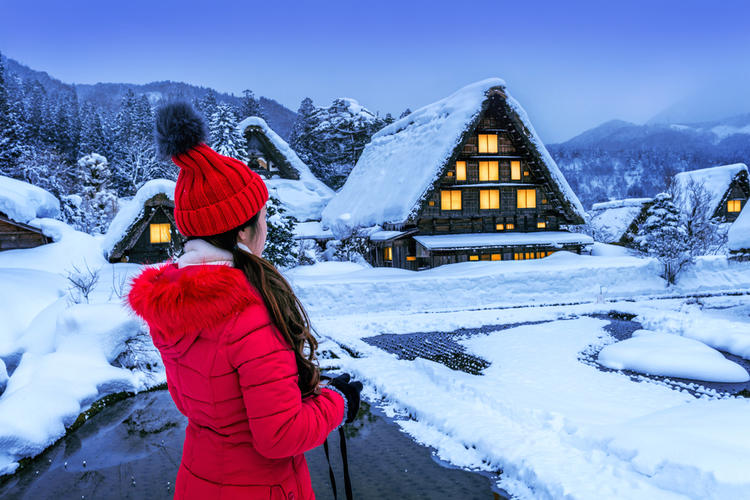 The Ultimate Guide to Preparing Yourself for Winter in Japan

Come winter, Japan astounds people by displaying snowy landscapes of extraordinary beauty. Her winter festivals and illuminations are exciting too. Thus, a winter trip to Japan should definitely be on your travel list. However, different prefectures experience winter quite differently, so how should you prepare for your vacation? Check out our ultimate guide to find out more!

Before we go into the details of what to wear during winter, let us first understand the geographical layout of Japan. Consider these five points:

1) Comprising 47 prefectures, Japan is an archipelago that is composed of four main islands, namely Hokkaido, Honshu, Shikoku and Kyushu.

2) Hokkaido is the largest island and the northernmost prefecture.

3) As the second largest island, Honshu can be divided into five regions, namely Tohoku, Kanto, Chubu, Kansai and Chugoku.

4) As the southernmost prefecture, Okinawa lies to the southwest of Kyushu. Some researchers classify it as part of Kyushu while others consider it as an independent prefecture. But one thing's for sure: Since its climate is distinctly different from that of all other prefectures, we will often make reference to Okinawa in this article.

5) Since the Japanese archipelago stretches for about 3,000 km from Hokkaido to Okinawa, it experiences myriad climates running the spectrum from the subarctic to the tropical.

As such, being mindful of how radically different winter is in different prefectures is key to preparing for your upcoming winter vacation.

Winter is commonly thought to last from December to February in Japan. However, you can view  cherry blossoms as early as January whereas you can only admire them in Tohoku and Hokkaido in April-May. This means that the winter periods are as different as chalk and cheese in different regions. For the sake of brevity, we will give a succinct account of the winter duration, weather conditions and average temperatures in each island, with a particular focus on Hokkaido, Tokyo and Okinawa.

In Hokkaido, winter starts from November and stretches all the way to April. Many cities, including Sapporo, Niseko, Tokachi and Rusutsu, experience significant snowfall, which makes them attractive places to undertake all those winter activities that you love like skiing and snowboarding. (Do check out our article on the myriad places where you can enjoy pristine snow in Hokkaido.)

Temperature-wise, January and February are the coldest months, with the average temperature hovering between -4°C (25°F) to -2°C (28°F). Temperatures can even plunge to a heart-stopping -6°C (21°F)! Come March and April, mean temperatures will rise but are usually still below 8°C (46°F) - the temperature where most people typically find cold. For more detailed information, here's Tsunagu's very own guide on Hokkaido's weather and climate.

Tohoku differentiates itself from the rest of Honshu as it experiences similar climatic conditions as Hokkaido, with intense cold, biting winds and knee-deep snow. However, its winter is shorter than that of Hokkaido and typically lasts until end March.

Winter in the rest of Honshu lasts from December to February. As it benefits from a more temperate climate, it generally experiences warmer temperatures than Hokkaido and Tohoku. In generally, travellers can enjoy bright, sunny days instead of cold and cloudy ones.

Powerful Siberian winds blow over the Sea of Japan, so this means that the western part of Honshu is colder than the eastern side, with places like Niigata experiencing significant snowfall. However, the middle part of Honshu - comprising Tokyo, Osaka, Kyoto and Hiroshima, among other places - just experiences light occasional snow.

Located off the southern tip of Honshu, Shikoku undergoes fairly mild winters as it hardly receives snowfall. Similar to Honshu, winter in Shikoku lasts from December to February, with the lowest temperature hovering between 1ºC~2ºC (33°F~35°F) and the highest temperature hovering between 11ºC~13ºC (52°F~55°F). Perfect for travellers who wish to embark on the 88-temple pilgrimage and get in touch with their spiritual self!

As Japan's third largest island, Kyushu is located southwest of Honshu. Like Shikoku, it enjoys mild winters that last from December to February, with little snowfall and many cloudy days. Temperatures tend to be more forgiving here, with the average temperature hovering about a tolerable 7°C (45 °F). Particularly, we have a guide dedicated to describing Fukuoka's climate month by month for your reading pleasure.

If you have always wanted to take in the ephemeral beauty of cherry blossoms but can only get to Japan in January, don't worry! You can consider visiting Okinawa because cherry blossoms typically provide a spectacular visual feast from 10 to 30 January in Naha City. As the average yearly temperature is about 23°C (73°F), you can expect winter to treat you nicely here. Indeed, winter is a whole different ball game here, with even the coldest temperatures in January reaching 15°C (59°F), so don't overpack!

What To Wear In Winter [Region-Specific Advice]

Now that you have a clearer idea on the seasonal variations that exist between different regions in Japan, let's get on with tips on how you ought to layer during your winter vacation since the arsenal of winter gear you pack for Hokkaido will obviously be very different from your winter clothes tailored for an Okinawa trip.

Also consider your home country as your place of residence will naturally condition your tolerance level against cold weather. For instance, people who live in notoriously cold nations like Russia and Canada could get by with a warm sweater whereas their counterparts who live in tropical countries may need a down jacket.

For travellers heading to Hokkaido, Tohoku and other places that receive heavy snowfall, it will be wise to insulate your lower half of the body, so investing in a solid pair of winter boots that grips well will be paramount. Warm knee socks will be useful as well.

As for the upper half of your body, you may wish to put on more layers of warm clothing. In fact, in order to bolster against the winds, you can even want to beef up your outfit with these accessories: a beanie, a scarf, gloves and ear warmers!

If you are visiting Shikoku, Kyushu and most places in Honshu, then sticking to a 3-layer rule should serve your needs: a base layer, a middle layer and an outer layer.

The base layer is typically a thermal garment that helps to wick moisture off your skin. In recent years, the thermal wear HEATTECH launched by Uniqlo has been so well-received by global citizens that it has become synoymous with the base layer. HEATTECH keeps you warm, not only because it wicks moisture off your skin, but it also helps to convert the vapor into heat. Talk about a piece of clothing that serves dual purpose!

Read on to find out more about Uniqlo below in the next section.

As your middle layer should help you retain body heat effectively, you can prepare either fleece turtleneck tops or knit sweaters, both of which are warm, soft and lightweight. All this enables you to navigate Japan with aplomb!

Lastly, your outer layer has to shield you against the biting wind and pouring rain. As such, you should bring along a puffy down jacket or even a thick coat. Make sure that your outer wear is waterproof.

Moving on to the lower half of your body, while you will most likely not require winter boots and knee socks, it will still be great to prepare either leggings pants or warm fleece-lined pants.

People heading over to Okinawa will be relieved to know that instead of packing multiple layers of winter wear, they should be able to get by with just hoodie sweatshirts or parka jackets!

What To Wear In Winter [Gender-Specific Advice]

For ladies who wish to still wear skirts and showcase their indomitable style, what can they do instead? If this speaks to you, perhaps you can include a long down jacket or coat as part of your outfit. Long winter stockings will also help you nail the gorgeous look you wish to portray.

Fashion-conscious men may want to prioritize style over comfort, in which case investing in an immaculately made trench coat will be the way to go. A trench coat not only keeps you snugly nestled against the cold, but also empowers your look.

Travelling in Japan and realizing that your winter outfits don’t quite meet the mark? Fret not! Here are some established stores that you can patronize and buy what you need.

Creating a solid presence both domestically and overseas, Uniqlo specializes in simple, yet chic designs at wallet-friendly prices. More importantly, it has revolutionized the winter wear industry with its thoughtful innovations that guarantee you warmth so that you can be free to savor the holiday mood. In particular, its HEATTECH inner wear which preserves heat via air pockets created in between fine woven fibres have become a staple item for many Japanese. Another plus point is that Uniqlo's winter clothes are usually lightweight, which saves you invaluable luggage space.

Uniqlo also undertakes many collaborations with established brands like Marimekko and JW Anderson, so it is an awesome brand to turn to if you wish to accentuate your fashion sense and keep warm at the same time.

Did you know that Fast Retailing, the company which owns Uniqlo, also owns a popular fast fashion brand called GU? If you are pleasantly satisfied with the prices of Uniqlo clothing, your eyes will widen with glee as you take in the fashion items offered by GU - they are at least about 30% cheaper than their Uniqlo counterparts. What a great way to stretch your dollar!

Besides price, GU also appeals to trendy fashionistas and social media influencers who wish to keep up with the latest trends. Unlike Uniqlo which focuses on functionality, GU launches cutting-edge designs regularly which adds a touch of uncommon style. So you can be bundled up to the nines to keep warm and make a fashion statement.

For those of you who are outdoor enthusiasts and wish to undertake physically demanding activities like hiking and skiing, you will probably need specially tailored outdoor gear that will help you endure the harsh cold. Luckily, there is a store named Montbell that will deliver what these passionate thrill seekers need. In fact, its founder, Mr. Isamu Tatsuno used to be an avid mountaineer, so you can be sure that his products pay homage to user experience!

Montbell down jackets are made from resilient shell fabric and advanced quilting techniques, so not only are they able to withstand the rain and wind, but they are also lightweight, thus allowing you to bask in nature and move as fast as Sonic the Hedgehog. Montbell's DRY-TEC Insulated Light Pants similarly insulate the lower half of your body.

Socks are among the first lines of defence against the cold, so it's reassuring to know that Tabio - a leading legwear company in Japan - offers premium quality socks. Elevating sock-making into a fine art, Tabio produces socks that are so intricately made that its employees typically need 15 to 20 years before they can fully master the customized weaving machines. With such attention paid to the craftsmanship, you can rest assured that Tabio socks offer unparalleled comfort and a smooth, finished texture - all the better to conquer winter with!

We have put together an exhaustive guide that boasts an arsenal of information that will empower you to battle against Japan's winter and focus on relishing your time to the fullest instead. But with power comes responsibility, so we hope that you will share this article with your network so that they may acquire these tips too!

Kai Le
Kai Le loves writing and Japan. So he is glad to marry his two passions with tsunagu Japan.