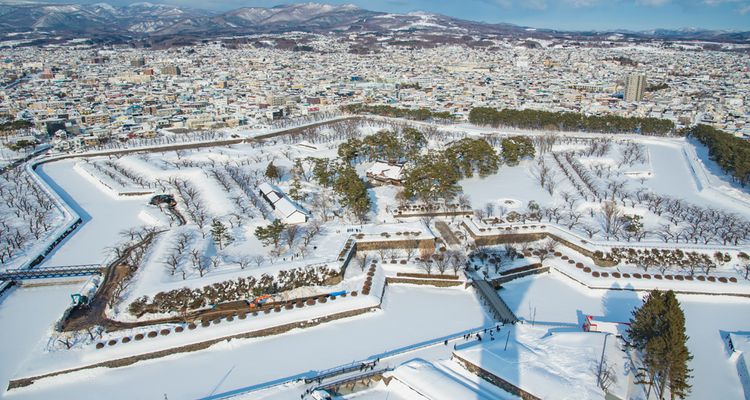 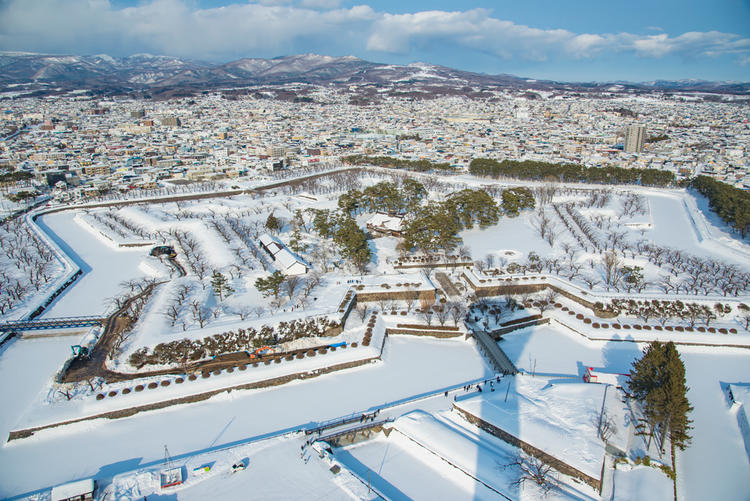 A Guide On Hokkaido's Weather & Climate

Hokkaido is the northernmost prefecture of Japan. It gets tons of snow every year – so much that some houses have a second entrance upstairs in case it snows too much! If you are traveling to Hokkaido, there are many points to watch out for, such as preparing warm winter clothes. However, rest assured that the inside of buildings are usually warm thanks to amazing heat devices like kerosene stoves!

The roads in Hokkaido during the winter are often frozen, so it will be safer to attach anti-skid bands or tape to your shoes. During winter, anti-skid goods are widely available in various stores, so it is recommended to take a look at your nearest store.

Like the previous month, the brutal cold continues through February. Average temperatures lie around -2°C (28°F). The lowest temperature is around -6°C (21°F), while the highest is around 0°C (32°F), so it would still be difficult to walk around and do some sightseeing. The snow's still there, and many roads that people walk on (like crossroads) will be frozen, so you need to be careful when moving from place to place.

Down jackets will come in handy, as they are light, but will keep you warm. The ones with a hood will be especially useful when it is snowing. Also, wearing tights or leggings under your pants is a good way to ease the cold. Even during the cold season, various outdoor events - such as the Sapporo Snow Festival, where you can see a lot of ice sculptures - are held in Hokkaido. If you are well-prepared, you can have a lot of fun!

It will gradually get warmer in March, but you will still need a heater. Make sure you are putting on hats and gloves to keep yourself warm! Tights and leggings are still highly recommended. From late March, rainy days will increase. Average temperatures lie at around 2°C (35°F), with the lowest temperatures around -2°C (28°F) and the highest ones around 6°C (42°F).

Every March, a ski event called Vasa Loppet Japan is held in Asahikawa. It is a casual cross-country ski competition that anyone can participate in. There is no better way to enjoy Hokkaido!

The cold gets much better in April, but cold days still continue in the eastern part of Hokkaido. Average temperatures lie around 8°C (46°F). The highest temperature is 4°C (39°F), and the lowest temperature is 12°C (53°F). From mid-April, the snow starts to melt away, so you can finally walk in sneakers or regular leather shoes.

Sakura (cherry blossoms) in Hokkaido bloom from mid to late April - which is later than in the mainland - and come to full bloom in early May. At Goryokaku Park in Hakodate, 1,600 sakura trees light up at night to create an outstanding view. The view of the park from a nearby tower, Goryokaku Tower, is also worth seeing!

Sapporo Lilac Festival - an event that'll let you feel the arrival of early summer - will take place during May. At the main site, Odori Site in Sapporo, you can see around 400 lilac trees. There will be outdoor music festivals, which is one of the things you should look out for!

Although the mainland experiences its rainy season during June, Hokkaido doesn't have a rainy season. It does rain at times, but not much. When it’s clear, it is a perfect day to go out and do some sightseeing. Average temperatures lie around 16°C (60°F). The lowest temperature is 13°C (55°F), and the highest temperature is 20°C (68°F). It is still cool in the morning and at night, so it is recommended to bring long sleeve shirts with you.

Yosakoi Soran Festival - the main summer festival at Sapporo - will happen this month. It is an energetic festival that gets around 2 million visitors. Some impressive dances will be performed by around 30,000 dancers, all dressed in colorful outfits, at various sites throughout Sapporo City.

Hokkaido is mainly perceived as a snow country, but it does actually have summer weather during July. You can get by perfectly fine in just a t-shirt, as most of the time, a lot of sunlight can be expected during the day. Average temperatures lie around 21°C (69°F). The lowest temperature is 18°C (64°F), and the highest temperature is 25°C (77°F). It gets pretty hot during the day, but gets cold from the evening, so a cardigan or jacket will come in handy.

The Hakodate Open-Air Play will be held in Hakodate this month. It is an event where Hakodate locals will perform plays based on the local history, such as the age of Ainu (indigenous people of Hokkaido) and the Hakodate War. All these plays are created by the citizens themselves, and they're performed in a vast theatre (100m x 80m) set at Goryokaku Park. What makes the festival even greater is the fact that the sound and lighting are both done by professionals. It is a show that has been loved by locals for many years!

August marks the start of Hokkaido's "real" summer. Average temperatures lie around 24°C (75°F). The lowest temperature is 20°C (68°F), and the highest it gets is around 28°C (82°F). You can visit beaches during this season. Unlike the weather at other parts of Japan, it is pretty dry even when it is hot. It is really nice and cool in the shade, but it still gets cold at night.

The Kushiro Port Festival takes place this month at Kushiro. It is the biggest festival in Kushiro, and a lot of people visit every year just to see the people carry the fishing boat-shaped festival float, along with dances and parades performed by the locals.

It starts to feel pretty cool from mid-September. Average temperatures lie at around 19°C (66°F). It is around 16°C (60°F) when it’s cold, and around 23°C (73°F) when it’s hot. You may not be comfortable in just a t-shirt anymore. It will be better to take a long sleeve shirt or windbreaker with you when you go outside.

The Sapporo Autumn Fest is an event held in Sapporo, where you can have a lot of good dishes that are unique to Hokkaido. You can try all the things Hokkaido has to offer, such as agricultural and marine products, local delicacies, and seasonal dishes.

This month marks the end of Hokkaido's short summer. Starting from October, it gets colder and colder. Average temperatures lie around 11°C (51°F). The lowest temperature is 7°C (44°F), and only 15°C (59°F) at the highest. You will need a jacket or coat when you are going outside. You may even need scarves and gloves!

November means that it is already winter in Hokkaido. This is the time of year when Sapporo and Asahikawa usually get their first snow. The average temperature is around 2°C (35°F). It gets as cold as -1°C (30°F) at the lowest temperature, and only 6°C (42°F) even at the highest temperature. You will need some proper winter clothes. It is recommended that you put on a down jacket, gloves, warm hat, and scarf.

The Sapporo White Illumination that lights up the city of Sapporo starts this month and ends in the following March. Landmarks in the city - such as Odori Park, Minami-ichijo Street, and other streets around the train station - will be beautifully lit up. You will be surprised when you see the size and scale of the illuminations!

The Hakodate Illumination will start this month at the Motomachi district of Hakodate. The base of Mt. Hakodate, Hachiman-zaka Hills, and Nijukken-zaka Hills will be lit up, so you can expect to see some magical views there!

Hokkaido is a snow country with a long and heavy snow season. You will need to be extra careful with your clothes during winter. In contrast, it has a short yet pretty comfortable summer. You can enjoy sightseeing when there's fine weather!