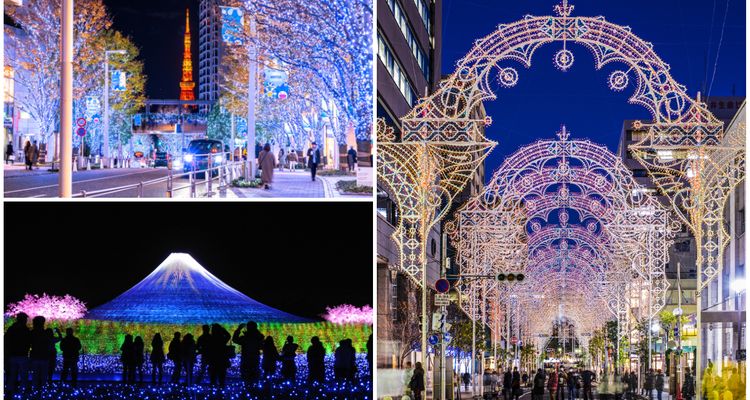 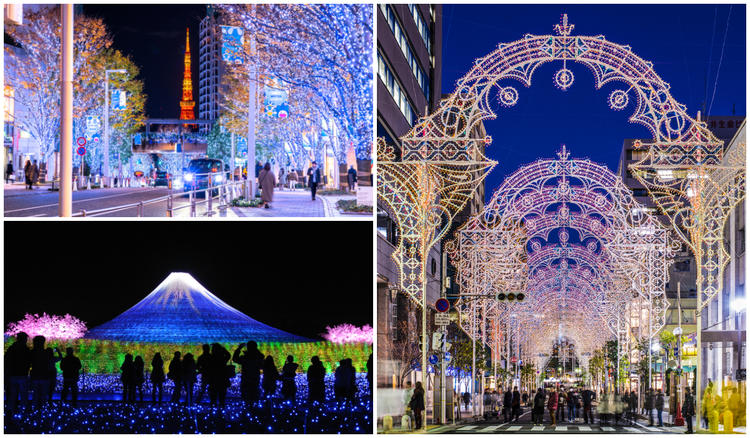 Starting around November, places all over Japan transform into dazzling galaxies of light and color with their winter “illuminations.” True to their name, these light installations brighten the winter sky at night, drawing attention from all around. Every year brings about new themes, colors, and displays, making them a worthwhile sight for anyone visiting Japan over the holidays. But where should you start with the overwhelming array of illuminations available? Let us take you through a comprehensive list of Japan’s most memorable winter light shows!

NOTE: Some 2021 illuminations may be or have already been canceled due to COVID-19. Please check the official websites before making any travel plans.

Located at the Oi Racecourse (Tokyo City Keiba), which is easily accessible from Tokyo Station and Haneda Airport, Tokyo Mega Illumination is divided into the Twinkle Area and the Harmonious Sparkle Area. Each one houses different yet equally mesmerizing exhibitions of colorful lights, AR experiences, and projection mapping. The highpoint of Tokyo Mega Illumination is the “Twinkle Fountain and Aurora Borealis” show, which combines lasers, water, and music to transport visitors into a world of wonder and imagination.

The lighting up of Keyakizaka Street in Roppongi Hills is, to many, the unofficial start of winter and the Christmas season in Japan’s capital. Beginning in early November, the 400-meter-long street is adorned with thousands of “Snow & Blue” lights that transform this part of Roppongi into a winter wonderland even in the absence of actual snow. If you’re in the area, please also check out the Roku-Roku Plaza Illumination, featuring a giant Christmas tree decked out in lights, which kicks off on November 23.

Part of the annual Christmas celebration held around Tokyo Midtown, a spacious multi-use development area in Akasaka, the 2021 Midtown Winter Lights installations will include:

・The Promenade of Lights, where 150 trees will become lanterns bathing the Tokyo cityscape in warm, golden light.
・The Snow Light Globe, a 3-meter-tall installation of color, sound, and light, which this year will be accompanied by a soap bubble display (ends on December 12).
・Christmas Gift-Tree, where one decorative present will be added underneath the lit-up tree each day as a countdown to Christmas.

Don’t miss any of them if you’re in the area!

One of the longest-running winter illuminations in Tokyo, the lighting up of the Marunouchi area will be celebrating its 20th anniversary in 2021. While the event is held all throughout the district surrounding the Imperial Palace East Gardens, its highlight is the lighting up of the 500-meter-long Naka Street. The 2021 theme of the Marunouchi Illumination is “magic,” which is why this year you can also enjoy a lit-up Christmas tree installation themed after Hogwarts, the magic school from the Harry Potter movies, at the Marunouchi Building. The Christmas tree will stay up until December 25. Different buildings in the Marunouchi area will also have their own unique Harry Potter illuminations, so why not walk around to see them all?

Near the end of the year, the 800-meter-long stretch of road between Shibuya’s Koen Street and Yoyogi Park is typically decorated with 600,000 blue LEDs, transforming the boulevard into the area’s famous “Blue Cave.” Though it’s a fairly new tradition, it’s already become synonymous with Christmas and the New Year in one of the most opulent parts of Tokyo. Check it out to discover how it feels like to walk through a starry night sky.

The Caretta Shiodome is a premier shopping and dining destination surrounded by some of the tallest buildings in Japan’s capital. But in winter, the highlights of this part of Tokyo can be found closer to the ground with the Caretta Shiodome Winter Illumination. With a theme that changes every year, the Caretta’s light installations, located throughout the ground-floor courtyard, add a little more magic to this already unforgettable complex every holiday season. They also often collaborate with Disney, adding even more sparkle to the festive display with music from famous Disney movies. See it for yourself if you ever get the chance.

Located near the artificial Lake Sagami, Sagamiko Resort Pleasure Forest is known as a place for fun outdoor activities that the entire family can enjoy. However, near the end of the year, it becomes a small city of light with its annual Illumillion event, which tends to last months. Its theme changes each year, with the 2021 version being based on Sailor Moon and including such dazzling lit-up installations as the Crystal of Love or the Moon Castle.

Tokyo’s Country Farm German Village is a park settled into the hills of Sodegaura in Chiba Prefecture that’s modeled after, well, an actual German village. The theme park is known for its winter illumination, which in 2021 will be celebrating its 16th anniversary. Visit the site to see a little slice of Europe in Japan come to life with all the colors of the rainbow and take a walk through a literal village of light.

Ashikaga Flower Park in Tochigi Prefecture has a lot going for it, being famous for its Great Wisteria Festival when the titular grand tree blooms in spring, as well as their light-up installation in the winter. Known as Flower Fantasy or the Garden of Illuminated Flowers, the annual event frequently tops the lists of the best winter illuminations in Japan. The general theme of this installation is, naturally, flowers, but you’ll also find other lit-up wonders at the park, which collectively are made up of over 5 million lights.

Festival of the Lights in Osaka (Osaka Prefecture)

Osaka sets up many different illumination installations throughout the city near the end of the year. While all of them have their own unique charms, the most popular ones are the Midosuji Illumination and Hikari Renaissance, which are all part of the Festival of the Lights in Osaka. Midosuji is an avenue in Osaka, whose section between Umeda and Namba comes to life with so many lit-up trees, it broke a Guinness World Record in 2015 for “most illuminated trees on a single street.” The Hikari Renaissance, on the other hand, is a series of artistic light installations, usually following some theme, spread throughout Osaka’s many open spaces.

Cherry trees may only bloom in the spring in other parts of Japan, but at Hirosaki Park in Aomori, they also come to life in winter thanks to the Winter Cherry Blossom Light Up. Near the end of the year, the 300 cherry trees at Hirosaki Park, many of which are over 100 years old, are decorated with thousands of pink lights that stand out beautifully against the area’s snowy winter landscape, creating a world of mesmerizing contrast that you can’t look away from.

The Nabana no Sato theme park is one of the most popular tourist destinations in Mie Prefecture. Picture it: flower gardens, foot spas, French, Italian, Chinese, and Japanese restaurants, and an observatory giving you a full panoramic view of the park. Now imagine it all covered in nearly 6 million lights, creating stunning LED landscapes and worlds of color for you to explore. If there’s real magic in this world, it’s probably found at Nabana no Sato. Especially don’t miss out on the 200-meter-long Tunnel of Lights, which is what brought this theme park to fame.

Named after the residence of the Dutch Royal Family, the Huis Ten Bosch theme park is a beautiful recreation of the Netherlands in Nagasaki Prefecture. With its canals, windmills, and seasonal flowers, guests to Huis Ten Bosch feel like they have been magically transported to Europe. But in winter, when the area is lit up during its Kingdom of Light event, visitors to the park feel like they have been spirited away to a magical world of imagination that uses 13 million LED lights and frequently tops the lists of the best winter illuminations in Japan.

Held every year to commemorate the lives lost during the Great Hanshin Earthquake of 1995, Kobe Luminarie is a dazzling installation that uses 200,000 lights powered entirely by renewable energy. Attracting millions of visitors each year, the event has become a staple of Kobe because of its grand size and the fact that for its duration, traffic around the Luminarie stops so that people can tale leisure strolls through it. Some have described it as walking through a massive cathedral made from light.

Found in San'in Kaigan Geopark, part of the UNESCO Global Geoparks network, the Tottori Sand Dunes are the symbol of Tottori Prefecture and the largest land masses of its kind in Japan, attracting visitors from all over the country all year round. In winter, the spectacular sea of sand transforms into a sea of light with the Tottori Sand Dunes Illusion event. Come witness a desert come to life with all the colors of an electric rainbow if you ever get the chance.

The largest winter illumination in the entire Tohoku region, Sendai’s Pageant of Starlight begins when 160 zelkova trees lining Jozenji Street are decorated with 600,000 lights, creating a romantic tunnel of light. The theme for this year’s installation is “Step for New Hope.” With food stalls and outdoor events like music performances and ice skating, winter in Sendai is always a guaranteed magical time for the entire family.

No matter where you go in Japan, you’re sure to find some type of illumination around winter time. They have become a kind of Japanese winter tradition, loved by the locals as a way to add some cheer to what is otherwise quite a cold and dark time of the year. Every year they keep getting bigger and better, so if you’ve got a bit of time to spare during your travels, why not add one of these spots to your travel itinerary?