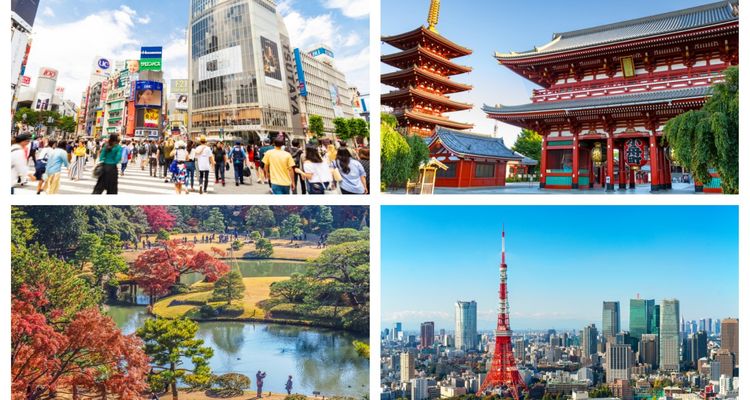 50 Things to Do in Tokyo

From the well-known staples to hidden gems, here is a compilation of 50 things you must do in Tokyo. Be sure to check it out before you head out on your trip and use it as a reference when creating your vacation itinerary!

Tokyo Station is the entrance way to Tokyo for a lot of tourists, and in its underground shopping center you can enjoy modern Japanese culture. In Tokyo Ramen Street, there are 8 popular ramen restaurants that always have a long line of people in the queue from morning till night. Also, on Tokyo Character Street, there are character shops selling everything from Pokemon to Precure to Tamagotchi. You can also find limited edition goods here.

The 12 story building in Ginza is the world's largest Uniqlo store and is a landmark full of rotating mannequins wearing multicolored items. While of course there are men's and women's sections, there are also a wide variety of baby and kids' items, so you can often see families shopping here together. Also, the store faces Ginza Chuo-dori, a street that becomes a vehicle-free pedestrian promenade on Sundays.

Since there are a lot of business companies in Yurakucho, there are also a lot of drinking bars in the area. Underneath the JR overpass, there are a great number of drinking bars with many repeating customers. The aroma of the food drifts in the air from the open-air stalls, creating an atmosphere that will make you want to go and drink from shop after shop. There are many places that will let you order yakitori from one stick and alcohol prices are generally cheap. This would be a good place to go if you want to take a casual dinner.

The Odaiba area is extremely easy to access from the airport. It's a popular spot because you can see a panorama of Tokyo Bay and the skyline. The landmark of Odaiba is the main building of Fuji Television, known as "Hachitama". You can take photographs with the sets of popular TV shows, and if you're lucky, participate in live events. You can enjoy Japanese entertainment at Fuji Television.

Oedo Onsen Monogatari is a popular relaxation spot in the Odaiba area. It is a hot spring theme park that is made to look like a street from the Edo period (1603-1868). There are private rooms with open-air baths, and you can enjoy traditional Japanese food as though you were staying at a ryokan, a traditional Japanese inn. There are many other attractions, apart from baths, so that you can fully enjoy Japanese culture.

The region around Akihabara Station is known as Denkigai, or Electric Town. The Electric Town is receiving a lot of attention for being the center of Japanese otaku culture. Many tourists enjoy taking pictures at maid cafes, cosplay bars, underground idol theaters, and other similar places. It's also interesting to see the otaku fashion in the Electric Town.

Rikugien is one of the two major gardens from the Edo period (1603-1868), which took 7 years to build. The garden is very spaceful, and you can comfortably spend your time here while enjoying the four seasons. It's very famous as a spot where you can appreciate the cherry blossoms and the autumn foliage. In those season, March-April and November-December, the park holds light-up events.

Tsukiji Shijo is the world's largest wholesale market. Japan's famous traditional restaurants' and Michelin starred restaurants' chefs gather here to buy their ingredients for the day. The products sold here are certain to have high quality. The intense tuna auctions starting from 5 am every morning is a sight to see. Most of the shops aimed towards professionals close in the morning. However, many stores and restaurants around Tsukiji are open until the afternoon, and there often is a long queue of people waiting to eat kaisendon (bowl of rice topped with different fish and shellfish) for lunch.

The yakatabune cruisers that calmly float down the Sumida River, while taking in the sight of Tokyo's downtown has been a refined way of pleasure since the Heian era (794-1185). It is popular as an excursion tour because you can see many famous sightseeing spots as you ride. There are many boarding areas, including Tsukishima, Hamamatsucho, and Asakusa, so you can pick which tour you'd like to go and from where you'd like to start. There are also boats with meal plans where you can eat a sashimi assort served in a boat-shaped dish.

The Imperial Palace, the emperor's resident, is one of the symbols of Japan as a country which is 2,000,000 square meters large in area. This peaceful space suddenly appears in the modern, busy area of Marunouchi near Tokyo Station. While going inside the Imperial Palace requires a prior application, you can fully enjoy the beautiful scenery of the outer moat freely. In the spring, the cherry blossoms bloom in profusion, and many photographers gather to take pictures of the sight.

If you walk just a minute to the right from Shin-Okubo Station, you'll find an area with many Korean restaurants and shops full of Korean products. In recent years, thanks to the Korean pop culture boom in Japan, this area has gained a large number of frequent visitors. It's also full of popular restaurants offering delicious meals such as samgyeopsal barbecue and soon-tofu soup. A genuine Korea town in Japan is rare, so it's popular for people visiting Tokyo.

The motif of this restaurant are "ninjas", warriors who served the samurais during the Sengoku Era, or the Warring States period (1467-1568). If you pass through the door hidden from the outside world, you enter the restaurant, which is set up like a fort. There are many items inside that are created under the ninja theme, like the scroll and shuriken shaped foods, bringing together the entire concept. During the meal there are surprise events, and being able to see the art of ninja up close is one reason why this restaurant is so popular.

Behind Asakusa's landmark Kaminari-mon is Tokyo's oldest temple, Sensoji. You can see Tokyo Skytree from here, so you can take a picture of the fusion of Japan's traditional and modern architecture. Also, in front of the temple, they burn incense that is said to be effective for ilnesses, so many visitors direct the smoke towards their heads and bodies. There are many stalls lined up on the road heading to the temple, and on weekends you can enjoy a festival-like atmosphere.

The 250 meter long road full of souvenir shops leading from the Kaminarimon in Asakusa is called Nakamise. Nakamise is a temple city that has been around since the Edo period. Even today it's still adorned with showy Japanese-style ornaments in each season, making you feel the vestiges of the old days. Some popular souvenirs are snacks called ningyo-yaki and age-manju. It's recommended to walk around the temple grounds while enjoying the food.

One of the representatives of Japanese fried food is tempura. Because of the crunchy coating and the soft texture of the ingredients, it's very popular with foreigners. In Japan, the first restaurant to have created tendon (tempura on rice) is  said to be Sansada in Asakusa. Thanks to the creation of tendon in Asakusa, a tendon culture has taken root in that area. Since tendon used to be a high-class food that common people couldn't eat, many people in Asakusa during the Edo period loved it, and now it's a dish that modern Japanese food cannot live without.

Cooking classes have become more and more popular with travelers over the years, as they are an excellent way to experience the local food culture. The teachers are experienced locals who can speak English, allowing for the opportunity to get to know a Japanese local while learning how to cook Japanese classics such as ramen, sushi, and gyoza (Japanese dumplings). There are so many cooking classes available—several of which cater to vegetarians, vegans, and even those who have to eat halal—so if you have a few hours, why not sign up to one? Here are some cooking classes in Tokyo by airKitchen to check out!

At Ryogoku Kokugikan, the institution built for professional sumo wrestling, there are sumo tournaments held three times a year in January, May and September. Since the tournaments tickets usually sell out, it is best to buy them in advance. There are many sumo stables in the area, so if you walk around you might encounter sumo wrestlers in their topknots. The "soul food" of sumo wrestling, chanko-nabe (a hot pot with a variety of ingredients), is famous in the area.

Homeikan is located in Hongo, a quiet area where many literary masters such as Ichiyo Higuchi and Kenji Miyazawa lived. The building of the Homeikan used to be a home in the Meiji period (1868-1912), but was reconstructed into a ryokan inn during the Showa period (1926-1989). The building is now registered as a tangible cultural property, and since both the facade and the inside retain a retro atmosphere, this spot very popular among foreign tourists. In the annex, there is a beautiful garden featuring lanterns and Japanese flora, so you can go there to cure yourself from the exhaustion of travel.

The Edo-Tokyo Museum is a history museum that sits next to the Ryogoku Kokugikan. Paintings and ukiyoe art from the Edo period, models of how people lived, and other exhibitions about the life in Edo are on display and you can easily spend a whole day here. Also, in the Tokyo zone, you can see a video from World War II. It's a popular spot for families.

Tokyo Skytree is a broadcasting tower which opened in 2012, that is taller than what is known as the landmark of Tokyo, Tokyo Tower. At the bottom of the tower is a shopping facility called Soramachi, which is full of fashionable shops and restaurants, so both tourists and local people alike enjoy visiting. If you go to the observation deck early in the morning, you can see Mt. Fuji.

Next： No.21-40 Further exciting spots and activities in Tokyo