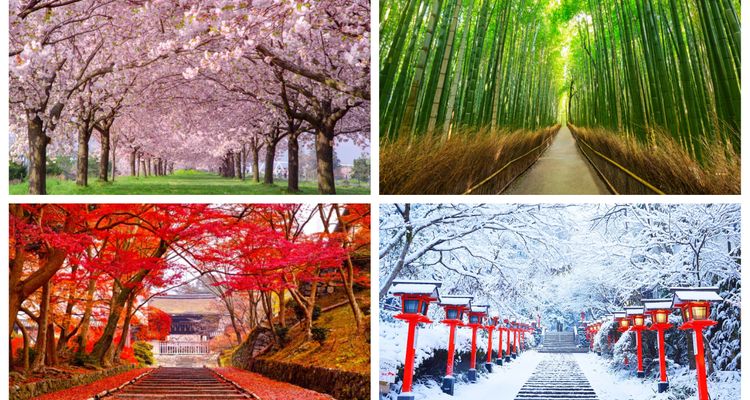 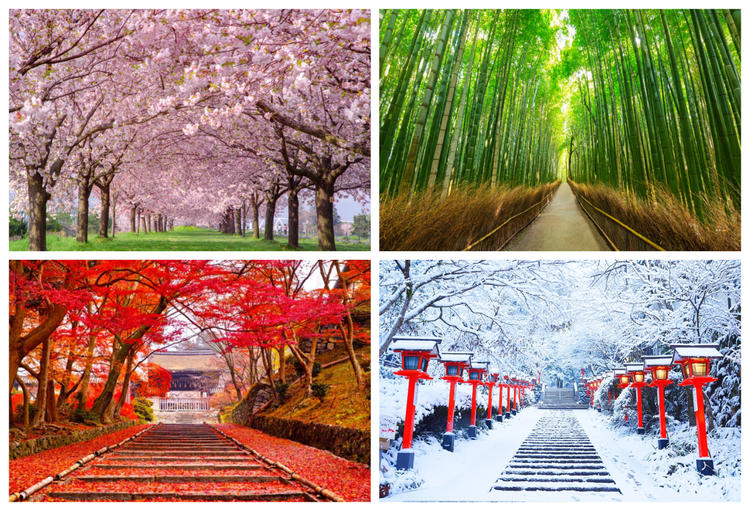 Experience the Seasons! A Complete Monthly Guide to the Weather in Kyoto

In Kyoto, the summers are humid and winters are extremely cold. If you take the right measures, however, there is no better place to experience the seasons of Japan! What time of year are you interested in? This guide comes with info on wagashi (traditional Japanese sweets) that show off the seasonal changes!

The new year has begun. With so many Shinto shrines and Buddhist temples in Kyoto, why not participate in hatsumode (your first prayer of the year at a shrine or temple)? It’s the coldest time of the year, so there are many snow days, making waterproof, non-slip shoes extremely convenient. Note that many shops may be closed for up to a week during the beginning of the year, and since many people will be returning home, public transportation might be quite crowded.

The traditional wagashi for January is Hanabira-mochi. Wrapped inside is a paste made of sweet white beans and miso.

Following January, it’s still quite cold. Be sure to ward against the cold with items like coats, gloves, and mufflers. Plum blossoms begin to bloom from the middle of the month, signaling the coming of spring.

The traditional wagashi for February is Uguisu-mochi. These simple mochi (glutinous rice cakes) with yellow-green kinako (roasted soy flour) made from green soybeans are quite pretty!

You’ll still need your winter gear for the first half of the month. Although it’s gradually becoming warmer, the mornings and evenings are quite cold. Plum, peach, and cherry blossoms have begun to bloom, and you can feel the arrival of spring.

The traditional wagashi for this month is Sakura-mochi. It’s a fragrant sweet that is wrapped in pickled cherry blossom leaves.

Warm days are becoming more frequent, and if you’re walking, you will start to sweat. You can relinquish your coat during the day. The beginning of the month is the best time to see sakura, and with so many tourists coming in, it’s sure to be crowded.

Although there will be occasions where wearing short sleeves during the day is okay, the nights are cool, so long-sleeved shirts will come in handy. This is the time of year with the most greenery, so it's recommended to go out to the city outskirts and suburbs. One of Kyoto’s three biggest festivals, Aoi Matsuri (Aoi Festival), is held at this time. Enjoy the parade of people wearing Heian era (794 - 1185) costumes!

Plump Kashiwa-mochi is the traditional wagashi for seasonal festivals in May.

It’s the rainy season, so there will be plenty of rain. The temperature, as well as the humidity, will be high, making the days continually damp. Since it’s not uncommon for rain to fall at any time, you’ll be able to go about your day in peace by carrying around a folding umbrella. The damp air makes it the best time to see the blooming hydrangeas.

"Minazuki" means June and its jelly-like texture makes it an addictive sweet.

It’s finally the height of summer! The temperature peaks over 30°C (86°F) for days at a time and the humidity is high, so take care to keep hydrated. Items like hats and sunglasses are necessities. The Gion Matsuri (Gion Festival), which reminds one of summer in Kyoto, is held during this month.

Wakayu, which is modeled after ayu - a seasonal fish - is a wrapped gyuhi (a type of wagashi made with rice flour) that's similar to mochi.

This is the hottest time of the year. There are many extremely hot days with no wind and it’s harder to sleep at night. On days like that, you can try dining on the wooden platforms erected over Kamo River (Kamo-gawa) in the heart of Kyoto City.

The cool and smooth Mizu Manju is an easy-to-eat sweet, even on hot days.

Although the temperature begins to drop towards the end of the month, it still feels comfortable wearing short sleeves. The nights are cold, so having something to throw on will come in handy. It’s typhoon season and the precipitation is high, so be sure to keep checking the weather report!

Kuri Manju, designed in the form of a kuri (chestnut), will make you feel the approach of autumn.

You will be chilly in short sleeves, so you need long sleeves and something to wear over your clothes. It tends to get dry, so be careful not to catch a cold. The autumn colors of leaves will begin to show from late in the month and night-time illuminations will follow suit. This is when the Jidai Matsuri (Jidai Festival) - a festival where a parade of people representing each period of Japan's history will march from Kyoto Imperial Palace (Kyoto Gosho) to Heian Shrine (Heian Jingu) - will be held.

If you're looking for a souvenir, it is highly recommended to try the Kuri Mushi Yokan, as it uses plenty of chestnuts, which will be in season.

We’re getting further into autumn and since the temperature has dropped noticeably, you’ll need a thick jacket. As it’s the best time to see the autumn leaves, why not enjoy them with some shinshu (a type of Japanese alcohol), which also appears in store shelves around this time of the year? Many tourists come to Kyoto to see the fall colors!

These wagashi, created to look like fall leaves, look so beautiful that they're almost a waste to eat!

It’s gotten quite cold, so coats and gloves are absolutely necessary. If you’re lucky, you might get to see the fall leaves and snowy landscape at the same time! It’s also fun walking around the illuminated streets at night.

You can get Christmas-themed wagashi during this season.