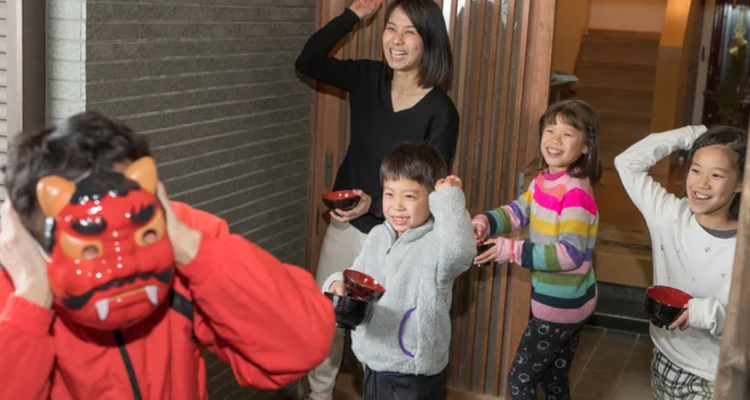 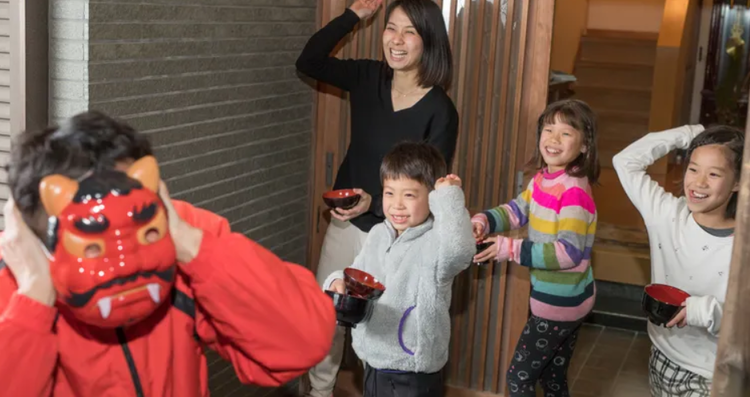 Beans to You, Demons! A Guide to Setsubun in Japan and Ehomaki

Early February in Japan might not feel like spring, but the lunar calendar disagrees. February 3 (or 4, depending on the year) marks one day before the official start of the new season in the lunar calendar, which Japan celebrates during the festivities known as Setsubun (or “seasonal division”). It may not be a national holiday, but it has all the makings of one, from an atmosphere of fun for the entire family to its own signature food: beans and ehomaki sushi rolls. Interesting fact about the former is that the beans also double as weapons for fighting demons! Here are some more things you should know about the Setsubun celebrations.

How to Celebrate Setsubun

In 2022, Setsubun will take place on February 3 and as always will be all about "mamemaki", a custom that goes back to at least the 14th century and involves the throwing of roasted soybeans in a fun exorcism that even kids can get into. To do mamemaki properly, you need to first purchase fukumame (luck beans), which are available at most Japanese stores starting from January, and then throw them out the door while yelling “Oni wa soto!”, or “Demons out!” This is mostly symbolic with “demons” being a stand-in for human misfortunes.

After that, you go outside and throw beans inside the house while yelling “Fuku wa uchi!” meaning “Luck in!” The custom dictates that you then eat some of the “inside” beans, which is why a lot of them are sold in small plastic packs that you throw whole, making it easier to circumvent the 5-second rule and eat the fukumame off the floor.

How to Celebrate Setsubun (Advanced Version)

That’s the most basic way of celebrating Setsubun but it’s not the whole story. The number of the beans you eat should also correspond to your age, although some customs say that eating your age plus one will extend your lifespan. Additionally, in some households, either the most senior male member of the family or a male who shares the same zodiac sign as the New Year (in 2022 that would be the tiger) sometimes plays the role of the demon during the legume exorcism. This involves them wearing a paper/plastic demon mask (often sold in sets with the fukumame) and standing menacingly outside the door while being pelted with roasted beans. Waving a big demon spiked club around to really sell the character could be dangerous and is generally frowned upon.

Households in Kanto and Nara can even take it a step further and go old-school by decorating their houses with fish heads or pointy holy tree leaves, which wards off demons because they’re afraid of anything that can poke out their eyes. But then again, aren’t we all?

The Biggest Setsubun Celebrations in and Around Tokyo

Although Setsubun started out as a family affair, over the years it’s grown into huge public displays, many of which are televised, may involve prizes, and are attended by famous politicians and other celebrities like actors or sumo wrestlers. Some of the largest events of this kind are held at the Zojo-ji temple in Tokyo or the Naritasan Temple in Chiba, which put together throw more than a ton of beans to the excited crowds gathered there every February.

The Asakusa Senso-ji temple holds an equally impressive Setsubun celebration, but this one is unique. While the “Oni wa soto! Fuku wa uchi!” chant can be heard all throughout the country around this time, Senso-ji, being a Buddhist temple that venerates the goddess Kannon, believes that demons would never show their face in the presence of their patron deity. That’s why the chants at Asakusa instead go: “Senshu banzei fuku wa uchi!” meaning “Luck in for all eternity!”

Beans are not the only magical food you can find during Setsubun. A more recent addition to the tradition comes in the form of the ehomaki sushi rolls. Traditionally, ehomaki should be made with seven ingredients representing the Seven Lucky Gods of Japan (Shichifukujin). They can be anything: cucumber, rolled omelet (tamagoyaki), roast beef, scallops etc. The particular ingredients aren’t important. What is important is that you roll all of them together and do NOT cut the end result. While cutting maki rolls is common practice with regular sushi, ehomaki are never cut as it’s believed that doing so would “cut off” your good luck.

How to Eat Ehomaki

Ehomaki can be easily made at home or purchased at a store. But no matter how you get one, you need to eat it the right way. Besides not cutting the roll, ehomaki must also be consumed in one sitting (in complete silence) while you face the correct, lucky direction.

The practice seems to have originated in Eastern Japan around the Edo period (1603 – 1868) and is meant to connect the ehomaki eater with a source of good luck that apparently changes position each year according to the way of yin and yang, the esoteric cosmology based on ancient Chinese philosophy. That’s right, the ehomaki “lucky direction” is always different. In 2022, it will be north-northwest, so if you want to get the most out of your ehomaki roll this year, you better bring the compass out.

If you want to learn more about sushi and how to make them, have a look into some sushi tours here to help you get started!

Which Setsubun Celebration is Right for You?

If you’re just visiting Japan in early February, you will probably get the most out of Setsubun by visiting one of the public celebrations held at temples all around the capital. They can get a bit hectic as everyone fights for the beans but it’s a one-of-a-kind experience that you won’t find anywhere else. Finish off your bean fight by eating store-bought ehomaki while facing the right direction and ride a wave of good luck for the rest of the year.