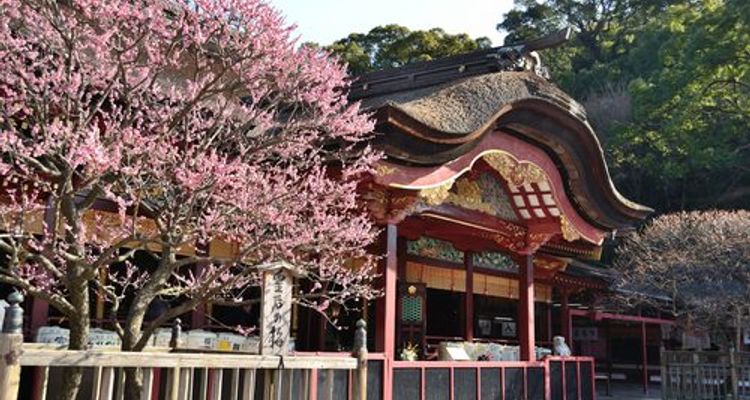 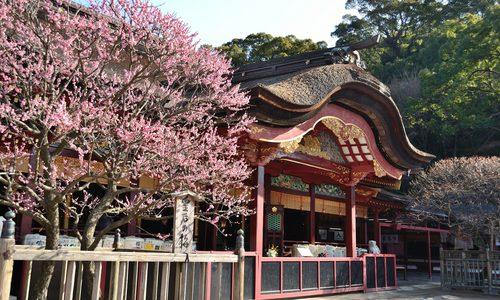 The climate of Fukuoka is that of Japan's Pacific Coast, so it's relatively warmer. Even in winter, it rarely goes below freezing point. However, it still gets cold during winter! Summer sees more rain than other regions, but winters are dry. It's especially important to prepare properly if you're not used to the Japanese weather. Start by getting familiar with the weather in Fukuoka!

January is the coldest month in Fukuoka. With the seasonal winds and the short daylight hours, the weather can be a little difficult. The average temperature is around 7°C (approximately 45°F), with highs of 10°C (50°F) and lows of 4°C (39°F). You'll need to have a down jacket or thick coat with you. Mufflers, gloves and tights are helpful too. There's also more snow than Tokyo. Do watch out for ice on the roads!

One of the representative events of Hakata, the Tamaseseri Rite, is held at the Hakozakigu Shrine. It's a festival where people pray for the year's harvest and for a good catch at sea. Groups of men compete fiercely to get hold of large wooden balls as part of the festival tradition.

February is as cold as January. The average temperature is around 7°C (approximately 45°F), with highs of 10°C (50°F) and lows of 4°C (39°F). However, that's already close to freezing point. If you're heading outdoors, dress warmly and wear a down jacket, muffler, or knit hat to guard against the cold.

The Setsubun Yakuyoke Kigan Taisai Festival is held at Dazaifu Tenmangu Shrine. Since it's a festival to ward off evil, it gets crowded and busy from the scattering of beans on-stage and other activities. It's also said that it's auspicious if you drink sake (Japanese rice wine) from a gourd flask while under a plum tree.

The Kyokusui No En Festival is held in the Dazaifu Tenmangu Shrine's Kyokusui No Niwa Garden. In this festival, people dress up in traditional costumes, like the Jyunihitoe (elaborate dresses worn by women during the Heian period). They recite poems and drink sake. It's a recreation of an event that used to be held during the Heian period. The beautiful garden is also quite a sight!

The average temperature in April is around 15°C (59°F). The highest temperature is around 20°C (68°F) and the lowest is at around 11°C (52°F). There's still not much rain. so it's perfect for sightseeing. It's the season for cherry blossoms, but there are still some cold days, so long sleeves and windbreakers are a good idea.

Speak of spring, and cherry blossoms come to mind. In Fukuoka, the cherry blossoms usually bloom between the end of March to early April. Top flower viewing spots like Nishi Park, Hosshin Park, the Kurume Castle Ruins and Maizuru Park feature cherry blossom trees that have a long history and are well-known to locals.

When May comes, it feels like Fukuoka suddenly becomes much warmer. The average temperature is at around 19°C (66°F), with highs at 24°C (75°F) and lows at 16°C (61°F). It is much warmer, but it's probably still too soon to go out in short sleeves. You can make good use of long sleeved shirts and cardigans. You'll be able to sightsee comfortably if you have a top that offers just enough coverage.

The Dontaku Festival is one of the representative festivals for May. During this period, there's a festive atmosphere everywhere in Hakata. There's also a wonderful parade with singing and taiko performances, bringing fun and entertainment to all!

Temperatures average at around 23°C (73°F) in June, and go as high as 27°C (81°F) and as low as 20°C (68°F). Temperatures continue to rise in this month. As Fukuoka enters the rainy season, it also gets more humid, and you'll start to feel the stuffiness. If you're heading outdoors, do be careful of heatstroke and remember to stay hydrated!

Yomiya Park plays host to the Tobata Shobu Matsuri Festival, where 20,000 stalks of iris flowers (approximately 50 varieties) can be seen. You can enjoy the beautiful flowers that are unique to the rainy season, as well as the festive atmosphere from the flea markets and stalls. July is another month that sees much rainfall. It's humid and stuffy - very much an accurate representation of Japan's summers. Average temperatures are at around 27°C (81°F). The highest temperatures are around 31°C (88°F). It doesn't get much colder than 24°C (75°F). It generally feels hot, so short sleeves are fine when heading outdoors. Do be careful though, as the air conditioning indoors, as well as in buses and trains, can be a little cold.

August marks the full transition into summer. The average temperature is 28°C (82°F), and temperatures range between 25°C (77°F) and 32°C (90°F). There's gradually less rain during this period, but it's as hot as July. Be sure to bring water with you when you're out and about! Do note, however, that the air conditioning in places like movie theaters might be a little chilly. It's a good idea to bring a long-sleeved top with you for that reason.

The Nishinihon Ohori Fireworks Festival is perhaps one of the most famous summer fireworks festivals in Fukuoka. The large scale festival sees more than 420,000 visitors every year. You'll be able to to see 6,000 bursts of fireworks from various parts of the city.

In September, there's still some lingering summer heat. Temperatures average at 25°C (77°F) and go as low as 21°C (70°F), but it can still get as hot as 28°C (82°F).  However, starting from mid-September, you'll feel that it's becoming cooler. It might be a little too cold to wander around in short sleeved tops. Bring some long-sleeved shirts with you and it should be fine!

In autumn, there's the Hojoya Festival that's held at Hakozakigu Shrine. It's a festival where people show their gratitude to the land and sea for their riches. This festival has a long history of over 1,000 years! Be there and enjoy the festive atmosphere together with the many worshipers who attend the event!

In October, temperatures average at around 19°C (66°F). The summer is truly over, and the weather becomes cool. The highest temperatures are at around 23°C (73°F), while it gets as low as 15°C (59°F). It's almost time to bring out jackets and coats! It gets particularly chilly in the mornings and evenings, so take care to stay warm when you sleep.

The Hakata Okunchi Festival happens in October, and is a festival where people pray for a great rice harvest. This festival is representative of Fukuoka's autumns, and has a long history of over 1,200 years. Participants carry portable shrines and parade through the town!

In November, you'll experience typical fall weather, and sometimes you might feel the chill. Average temperatures are at around 14°C (57°F), with highs of 18°C (64°F) and lows of 10°C (50°F). You'll need to have a jacket or coat with you when sightseeing. You'll also find mufflers, gloves and knit hats to be useful.

In early November, the red autumn foliage can be seen throughout Fukuoka. You can enjoy the breathtaking scenery at famous spots like Katsuyama Park and Kamado Jinja Shrine. Particularly at the Raizan Sennyo-ji Daihio-in Temple, you'll be able to see large maple trees that are over 400 years old!

December is when it starts to get really cold. The average temperature is 9°C (48°F) and doesn't get much higher than 13°C (55°F). It can also dip to around 6°C (43°F). There's also a cold sea breeze coming in from the Sea of Japan. Be prepared with a down jacket or thick coat to guard against the cold. The heating in trains and buses can sometimes be a little too warm though.

The Bayside Illumination is a must-see during winter in Hakata. The beautiful light-up at the bay area in Hakata has a wonderfully mystical atmosphere. The view from the other side of the bay is a wonderful contrast to the beauty of the sea.

Fukuoka is much further southwest from Tokyo, so there are some differences in the culture and weather. Arm yourself with knowledge about the climate throughout the year, and take your Fukuoka trip to the next level!

G. Ohara
I am one of tsunagu Japan's main editors. If you have any questions or information you'd like to see on the site, please email me at info@d2cx.co.jp. Thank you.