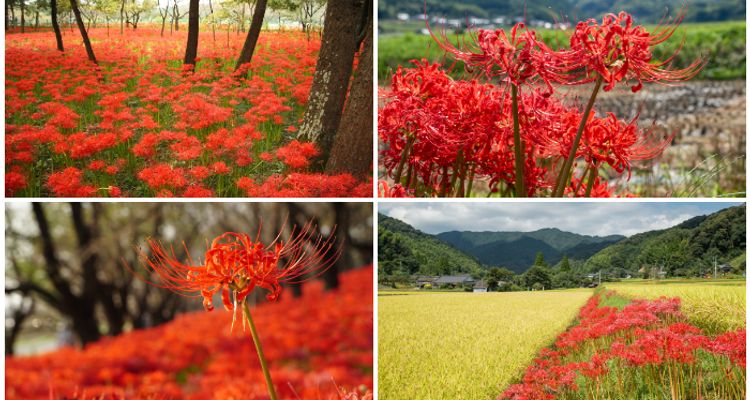 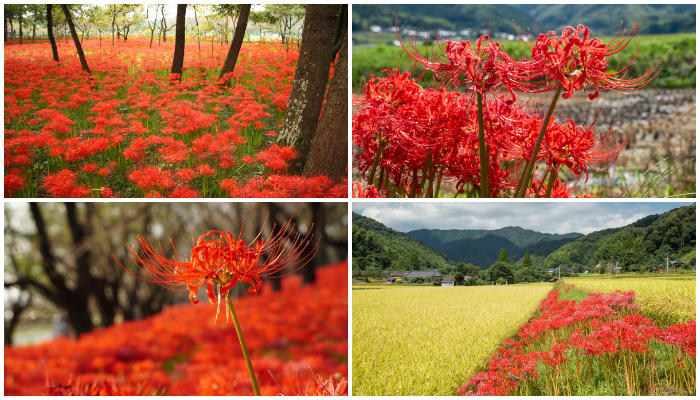 Say goodbye to the spring cherry blossoms, the rainy season hydrangeas, and the midsummer sunflowers! When summer comes to an end and autumn arrives, tourists can't wait for the arrival of red and gold maple leaves. However, there is actually another blushing red flower ready to bloom in early autumn: the red spider lily, also known as the “flower from hell” in Japanese. From mid-September to early October, these flowers blossom all over Japan's mountains like a flaming-red velvet blanket covering the ground. Here are some of the top places where you can admire their beauty!

About the Red Spider Lily

In Japanese, the red spider lily is called "manjushage". As the flowers and leaves do not grow at the same pace, and the Japanese believe that "no green leaves when the flowers are blooming; no red flowers when the leaves appear" symbolize separation, death, and oblivion, the red spider lily is also called the "flower of hell", "ghost flower", and "millenium flower". Legend has it that they bloom along the shore of the Sanzu River, a mythological river said to separate the living world and the underworld.

These blood-red flowers are charming and captivating. The brilliant red (also yellow or white) petals are supported by long, slender stems with poisonous roots, making for a lovely sight. If you are visiting Japan in early autumn, why not look out for these beautiful flowers?

Japan’s largest red spider lily field is none other than Kinchakuda Manjushage Park in Saitama. This park is 500 meters in diameter and 22 hectares in area. From mid-September to early October every year, 5 million red spider lilies bloom in the field, forming a mysterious and otherworldly scene. During the flowering season, the park holds the Manjushage Festival, which gathers food stalls, gift vendors, and stage performances for visitors from all over the world.

Kenei Gongendo Park is another famous spot in Saitama Prefecture for admiring red spider lilies. It also happens to be a popular place to see the cherry blossoms in the spring! When autumn arrives, 3.5 million red spider lilies bloom eagerly under the park's verdant trees and dye the area red, prompting countless tourists to rush in and witness this truly spectacular sight. This park also hosts a Manjushage Festival during this time. If you visit the tea house on the mountain top, you can indulge in drinks and homemade bread.

Gugyo-ji Temple is where the war hero Ieyasu Tokugawa’s granddaughter "Senhime" lies. Every autumn, 50,000 red spider lilies that have been planted for more than 40 years bloom fiercely in the field, engulfing the plains in enchanting flames. There are also the rarer white spider lilies, creating a stark contrast to the red flowers. On a fine day, the sun shines gently onto the petals through the gaps of branches and leaves, making the flowers seem even more dazzling and dreamy. Located on Bodai Mountain, the hondo (main hall) of Anao-ji Temple is designated as an important cultural property of Kyoto. During the autumn, the entrancing scenery of blooming red spider lilies and golden ears of wheat in the fields nearby is a major attraction. You can also capture different looks of autumn in Japan at different times of the day, such as sunrise and sunset.

Situated in Nara Prefecture, Katsuragi Hitokotonushi Shrine is home to an ancient ginkgo tree (estimated to be 1,200 years old), which is considered its symbol. In the vast fields in front of the shrine, fiery red spider lilies and ripe pre-harvest rice ears intertwine into a red-golden carpet. The greenery interspersed among the rice terraces, rivers, and ridges with the sunset's afterglow on top is almost as if the colors of nature's palette was spilled all over the land. This beautiful scenery has definitely won the hearts of many travelers.

Among many lakes and fields in Shiga Prefecture where you can see red spider lilies, Katsurahama Park with Lake Biwa in the background is the most famous scenic spot of the area. In spring, it is covered in lilac wild radishes, while the blush of red spider lilies paints a different scene during autumn. In recent years, Katsurahama Park has become more and more popular. It is now a must-visit spot that attracts many tourists traveling from miles away to come to capture the beautiful scenery with their cameras.

Handa City, Aichi is the birthplace of Nankichi Niimi, the writer of famous Japanese children’s story “Gon, the Little Fox.” Yakachi River, the real-life location where the story takes place, has a village surrounded by mountains and forests that is as charming as the fairytale world. In the autumn, as many as 3 million red spider lilies bloom along the river, and the stunning scenery of the red spider lily sea is extremely captivating. During the flowering season, aside from participating in the local "Gon's Autumn Festival," you can also enjoy different events such as traditional bridal processions and paper doll puppet shows on the bank of the Yakachi River and around the surroundings of the Nankichi Niimi Memorial Museum.

Called “No.1 of Northern Miyagi,” Haguroyama Park is one of the most popular sightseeing attractions in Osaki, Miyagi Prefecture. It is also a famous spot for admiring beautiful red spider lily fields, where the earth is set ablaze with a flaming red carpet. On September 23, 2019, the lively Haguroyama Park Red Spider Lily Festival was held with various special events, including symphonic band and taiko drum performances, as well as food stalls selling udon noodles, grilled chicken skewers, and grilled corn, and even hosting photography competitions.

Selected as one of the "Top 100 National Terrace Fields," the Tsuzura area is an ancient rice terrace with 700 hectares of farmland reclining on 300 stone steps. The curved yet well-defined terraces, the fields lying under the sun, the households living on rice farming, the surrounding greenery and the clear blue sky - all these elements of nature come together to create a beautiful and harmonious rural landscape. When the rice is harvested in the autumn, the breathtaking view of golden rice paddies and red spider lilies attract many foreign tourists, who come for the blossoms and the local Ukiha Higanbana Meguri (Spider Lily Festival) and Basara Dance Festival in late September.

The area surrounding the Nanatsumori Kofun (Ancient Tomb) Cluster in Oita was originally a wasteland until the locals revamped the site in 1954, and since then wild red spider lilies have been growing there freely. The cluster became famous after appearing in a Japanese movie, and is now a popular place for admiring red spider lilies in the autumn. 200,000 red spider lilies bloom alongside the National Route 57 across 20,000 square feet of hinterland. The local Nanatsumori Higanbana Festival is held here annually in mid-September, and tourists are welcome to join in the festivities.

Admire the Flaming Red Fields of Spider Lilies in Japan!

Different from the colorful flowers of spring and summer, the red spider lilies of early autumn entracingly and fluidly dye the mountains and forests of Japan into a blushing red. Next time you visit Japan in the autumn, why not plan a trip to admire these red spider lilies and experience their charming beauty for yourself?

*Do not trespass on flower fields or trample on the flowers when admiring them.
*Tripods are prohibited in some areas.
*Red spider lily bulbs are poisonous. Contact with the sap or the stem can cause skin inflammation and other conditions.