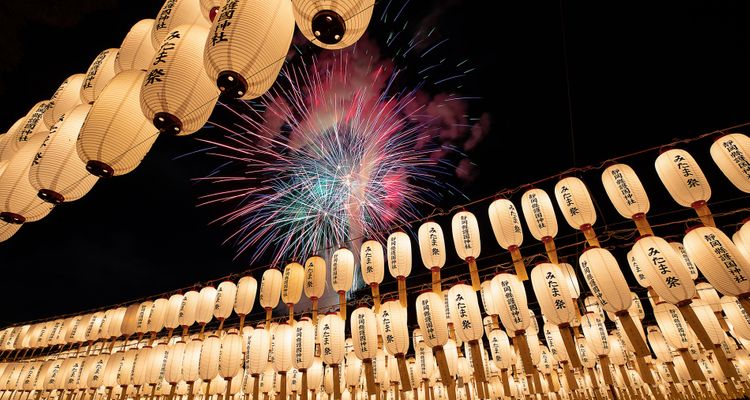 The Buddhist festival of Obon is a major annual summertime event in Japan. Celebrated for hundreds of years, it's a time to get together with family to honor one's ancestors. In this article, we’ll explain everything you need to know about Obon, allowing an in-depth understanding of this spiritual celebration!

Obon is a Buddhist festival celebrated in Japan each summer to commemorate ancestors and deceased relatives. In the Buddhist religion, it is believed that during Obon, the spirits of the dead make their way home to visit family before returning to the afterlife a few days later. The Obon period ends with events that help guide the spirits safely back to the afterworld.

During the Obon festival, family members will gather to carry out a number of ceremonial rituals and traditions. These are believed to ensure the spirits of the deceased a safe journey as they visit their relatives. Along with commemorating ancestors, Obon is a chance for family get-togethers, and is one of the biggest holiday periods in Japan.

In the vast majority of Japan, Obon is typically celebrated between 13-16 August, although the dates can vary depending on the region. In some areas, particularly in Kanto, the religious elements of Obon are carried out in July. This is because Japan formerly followed the Chinese calendar before switching to the Gregorian calendar in 1873.

Prior to adopting this new dating system, which is roughly one month earlier than the original, Obon was celebrated around the 15th day of the seventh month. However, rather than the seventh month of June, the month of August is actually closer to the time of year that Obon was originally celebrated. Because of this, for most of the country, Obon is celebrated in August during the height of summer, and the “Obon holiday” is almost always considered to be mid-August.

How Is Obon Celebrated?

During the Obon period, many travel across Japan to return to their hometowns to be with family. Though not officially a public holiday, Obon is one of the most important and spiritual times of the year in Japan, along with the “Oshogatsu” New Year period. As Obon is a family celebration, many take time off and businesses will sometimes close for the duration.

Trains, flights, and hotels are often fully booked during Obon, as millions of Japanese travel across the country to be with their loved ones. While much of the younger generation aren’t particularly religious and don’t celebrate the traditional aspects, they do take the opportunity to enjoy some time off during Obon. As a result, along with Golden Week and New Year’s, Obon is seen as one of the worst times to visit Japan from overseas, as accommodation and transport are largely booked-out.

What Are the Traditions of Obon?

As part of the Obon festival, families will carry out a number of traditions and customs. Though there are regional variations, many Obon traditions are universally practiced. These traditions are all designed to welcome the spirits of ancestors before they return to the afterlife.

Here are some of the traditional events that take place during Obon in Japan:

Kamabuta Tsuitachi is the name given to the first day of the month in which the Obon festival takes place. This is when it is believed that spirits will start their long journey from the afterlife to be reunited with their descendents. It is from this day that believers will start to clean and leave offerings at their family member’s graves, though this can be done at any time during Obon. Many also clean and leave offerings at the family altars in their home, called a “butsudan” in Japanese.

At the start of Obon, families light small bonfires called “mukaebi,” meaning “welcome fires,” near the entrance to their home. These fires are often lit by burning hemp reeds called “ogara” to help guide spirits on their journey. Lanterns, called “chochin” in Japanese, are also commonly hung outside the home to further welcome the returning spirits. Lanterns are also a frequent sight at temples throughout the Obon period too.

As part of the preparations for the return of spirits, people usually set up a spirit altar, called a “shoryodana” in Japanese, adorned with various offerings for the deceased. Amongst these offerings are “shoryo-uma,” animal-shaped objects made by inserting four chopsticks or toothpicks for legs into a cucumber and eggplant. Shoryo-uma means “spirit horse,” with the horse-like cucumber said to carry the spirits back quickly from the land of the dead. The four-legged eggplant resembles a cow, which will transport the spirits back slowly whilst also being able to carry the various offerings left by descendents.

In the same way that fires are lit to welcome returning spirits, “okuribi,” meaning “farewell fire,” are lit to guide them back. Okuribi are often small fires lit outside the home, again by burning hemp reeds. In some regions of Japan, it is also common for people to mark this occasion by placing floating lanterns on rivers and lakes in a tradition called “toro nagashi” in Japanese. These floating lanterns are usually adorned with messages to loved ones traveling back to the afterlife.

However, okuribi is most famous overseas for the huge bonfires at temples and shrines. The most iconic are the “Gozan no Okuribi,” held each year on 16 August in Kyoto. During Gozan no Okuribi, five enormous bonfires are lit across six mountains above Kyoto. Three of the bonfires form the shape of kanji characters, whilst two others resemble a torii gate and a ship. The bonfires are so large, they can be seen from the center of Kyoto.

Another famous okuribi is “Funakko Nagashi,” which takes place in the city of Morioka in Iwate Prefecture. Held in August for over 200 years, Funakko Nagashi centers around colorful, elaborate boats built especially for the ceremony, often in the shape of dragons. The boats are adorned with lanterns and notes bearing the names or photos of deceased family members, and are set alight while being led down the Kitakami River.

Bon Odori are traditional festivals of music and dance forming a central part of the festivities. Celebrating the arrival of spirits, Bon Odori takes place over a number of days and varies in style from region to region. Typically, Bon Odori dances see people dressed in dazzling “yukata” light kimono performing choreographed dances to traditional music. An icon of the summer festival season, Bon Odori dances have been practiced for centuries in Japan. Food stalls are often set up nearby, creating a joyous, carnival-like atmosphere.

Here are some of the most famous Bon Odori festivals in Japan:

Awa Odori has been performed in Tokushima City for over 400 years. It’s the largest of its kind in the country, taking place over three days in August each year. A huge number of dancers perform in groups called “ren,” dancing to songs performed with a variety of traditional Japanese instruments. The festival takes place in the center of the city alongside enormous crowds, lasting for several hours and continuing late into the night.

Gujo Odori in Gifu Prefecture is held over an entire month from the middle of July up until the first week of September. Just like Awa Odori, Gujo Odori boasts a long history, having taken place in the city for over 400 years. It consists of ten different types of dances, and is recognized by the Japanese government as a Significant Intangible Cultural Folk Asset. The dances are performed to music played by a group of musicians sitting in a small float. The processions go through various parts of Gujo, with the busiest days attracting up to 30,000 people.

The Owara Kaze no Bon festival takes place in the historic town of Yatsuo near Toyama City over the first three days of September. Owara Kaze no Bon differs from other Obon festivals in that its dances are intended to appease deities to protect residents from natural disasters and to ensure a bountiful harvest. During the festival, teams from 11 nearby areas perform carefully choreographed dances whilst wearing colorful kimono and unique straw hats that cover the face.

Obon is a time to remember loved ones who have passed away while enjoying some time off and celebrating summer. It is one of the most important periods in Japan, and, while it may not be the best time to travel, those who visit during Obon will get to experience a new side of Japan worth braving the crowds for!