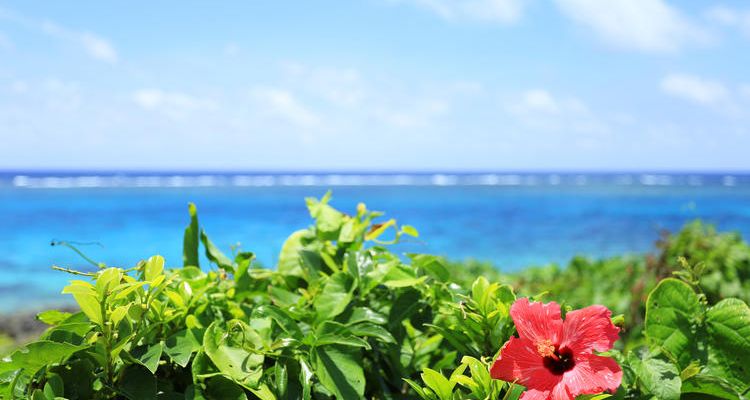 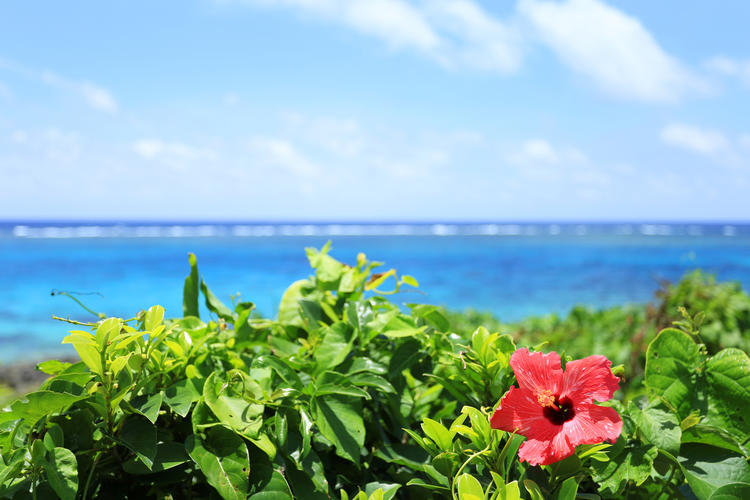 A sub-tropical climate with high humidity and rainfall. Okinawa, Japan, reminds one of a tropical resort, but the weather isn't always nice and clear. There are periods when there's a lot of rain and others when it gets rather humid. The wind also often becomes strong, and there are even times when there are many typhoons. That can become a major worry, so check out this overview of Okinawa's weather and climate ahead of your visit!

Okinawa is warm compared to Tokyo or Osaka. Even in January, the average temperature is around 17°C/62.6°F and highs of 20°C/68°F. The coldest it gets is around 15°C/59°F, so it's really comfortable. However, it is January, so it still gets a little chilly at times, meaning that short sleeves aren't exactly the best idea. It's better to go with layers that you can put on and take off easily. It doesn't rain much either, so it's the perfect season for walks.

The New Year's Celebration (Shinshun no Utage) is held at Shurijo Castle during the new year. You'll be able to get a glimpse of this recreation of a traditional ceremony that used to be graced by the King of the Ryukyu Kingdom and his officials.

Okinawa is at its coldest between January and February. However, the average temperature stays at around 17°C/62.6°F and the hottest it gets is around 20°C/68°F. The lowest temperatures are at around 15°C/59°F. This is the timing when you can view cherry blossoms in Okinawa. In the day, it's warm because there's sunshine, but it can get a little cold in the early morning and at night, so be careful.

The Yaese Sakura Matsuri (Yaese Cherry Blossom Festival) held at Yaese Park happens in early February when the cherry blossoms are at their most beautiful state. You've got to stay for the light-up event at night. The light from the lanterns make it such a beautiful scene! Local sake (Japanese rice wine) and Awamori (Okinawan liquor) are available at the venue.

The first half of March still sees some chilly days, but the weather generally gets warmer during the second half of the month. The average temperature is around 19°C/66.2°F, with highs at around 22°C/71.6°F and lows at around 17°C/62.6°F. Even then, it's better not to be complacent and cover up with long-sleeved tops.

In Okinawa, March marks the start of the beach season. The Chura Sun Beach is a beach that stretches for 700m. On days when the weather is good, you can see the beautiful blue sea. Besides swimming in the sea, you can also enjoy barbecues and marine sports.

April is said to be the best month to spend time in Okinawa. It's also perfect for sightseeing. Temperatures average at 21°C/69.8°F, hit highs of 24°C/75.2°F and are at their lowest at 19°C/66.2°F. There's no problem wandering around in just a t-shirt during the day. You'll be able to enjoy the comfortable early summer weather. It's still a little chilly in the early morning and at night, so do carry a long-sleeved top with you. April is the time when you can enjoy Okinawa before it enters the rainy season.

The Ryukyu Kaiensai (Ryukyu Hanabi Illusion) held in Ginowan City is an awesome event where you can watch 10,000 bursts of fireworks. Immerse yourself in the combination of artistic and beautiful fireworks set against a backdrop of fantastical music.

The start of Golden Week (a period where there are many public holidays starting from end April to early May) also marks the start of the rainy season. The average temperature in May is around 24°C/75.2°F. It gets as high as 27°C/80.6°F and as low as 22°C/71.6°F. The humidity is also high, so you'll really feel the heat. There will be airconditioning indoors, so it's better to take a long-sleeved top with you. When you're outside, short sleeves or shorts should work just fine.

Be sure to catch the Naha Hurley that happens during Golden Week. It's an ancient Chinese festival that was adopted by the Okinawans where people race against each other in long boats. It's such a big event in Naha that it even gets broadcast on TV.

June is even more humid than May. You'll experience 80% humidity days in succession. The temperatures also rise during this period. The average temperature is around 27°C/80.6°F and can go as high as 29°C/84.2°F, with 25°C/77°F being the lowest temperature. It's the rainy season, so you can expect lots of rain as well. The heat is evidence that it's really summer time. On clear days, bring your sunglasses and a hat with you.

Miyakojima Island plays host to the Miyako Island Rock Festival, a music festival experience that you can only get in Okinawa. Enjoy the blue seas, blue skies and great music at this festival.

The rainy season comes to a stop in June and Okinawa enters the peak of summer in July. The average temperature is 29°C/84.2°F, but goes up as high as 32°C/89.6°F and doesn't get lower than 27°C/80.6°F. There's not much rain, so you'll be able to enjoy summer as if you were in a tropical island in the south. That's why there are many tourists in town at this time, and it can get crowded in some places. Prepare sunglasses, a hat and also sunscreen.

Urasoe Tedako Festival, which takes place in Urasoe City during July, is an event that everyone in the region can enjoy. It is a visitor’s paradise, with tons of events like clown performances, as well as taiko drumming and music lives on the park’s stage. The fireworks show is also popular with the locals! Spots where you can clearly see the fireworks are expected to get incredibly crowded, so it’s recommended to snag a spot well in advance.

It's still the peak of summer in August and temperatures average at 29°C/84.2°F, with lows of 27°C/80.6°F and highs of 32°C/89.6°F. Rainfall increases during this time, so it's a month that feels especially humid. You'll perspire easily, so carry a towel with you when you head out. The second half of the month is when Okinawa starts to enter typhoon season.

10,000 Eisa Group, an essential part of Okinawa's summer since 1995, takes place on Kokusai-dori in August. Eisa, a traditional Okinawan performance art, is a type of folk dance. A large group of people beat on taiko drums and other instruments as the procession moves down the road.

An effect of the typhoons, September is a fairly wet month in Okinawa. The average temperature is around 28°C/82.4°F, goes as high as 30°C/86°F and as low as 26°C/78.8°F. It's not as humid as August, but the weather can still be rather muggy. It gets better as October approaches.

Ginowan Hagoromo Festival is the biggest festival in Ginowan City, spanning two days. A ton of events happen during the festival, such as the fireworks show where you can view around 1,800 bursts of fireworks by the beach, the Satto Rekishi Emaki Parade (about 300 people wear colorful outfits that originate from a local legend about a celestial maiden), and the Kachashi (Okinawan festive folk dance) event that each team performs in. Anyone that wants to enjoy a festival that touches on Okinawa’s history should definitely check this festival out!

Since it'll get a lot colder in October, you'll have to dress in long-sleeved tops. The average temperature is around 25°C/77°F and generally ranges from a low of 23°C/73.4°F to a high of 28°C/82.4°F. It's sometimes hot and sometimes cold, so it's better to dress in layers that you can take off and put on depending on the temperature.

There's a large-scale event called the Ginoza Mura Matsuri & Ginoza Mura Chura-jima Hanabi Taikai that happens in Ginoza during October. There are several stages where you can enjoy local performance arts, Eisa and other dances, fireworks, and even hero shows. It's a festival that both young and old people love.

November is a month when the humidity disappears and the weather becomes very comfortable. There is also little rainfall, so it's a great time for sightseeing. The temperature averages at around 22°C/71.6°F and stays between 20°C/68°F to 25°C/77°F. Even though it's November, this is still Okinawa, so you'll still end up sweating. However, it does get cold sometimes, so wandering around in your summer clothes is probably not a good idea.

In December, the average temperature is around 19°C/66.2°F while the highest temperature hovers at around 21°C/69.8°F and the lowest at around 16°C/60.8°F. There are strong winds, so it feels even colder. There will be times when you can get by with thin clothing, but it's quite cold in the mornings and at night. There's nothing to worry about if you bring along a muffler or something that you can cover your neck with.

The Itoman Peaceful illumination is a light-up event that happens at Uchina Farm in Itoman City. Take in the sight of the beautiful illumination powered by the wind. There are also song and dance performances, as well as fireworks, available to enjoy.

Okinawa is warm year round. Partially because it's surrounded by the sea, Okinawa's characterized by high humidity and strong winds. However, the blue sea and pristine white beaches are incredibly charming when the weather is good. If you're heading to Okinawa, be sure to read up on the weather and climate first!