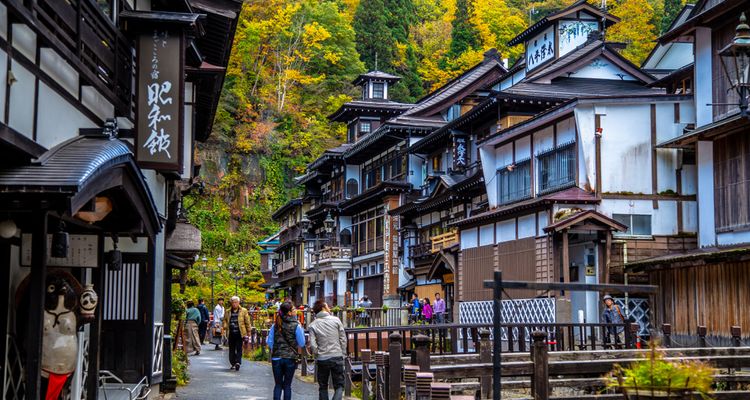 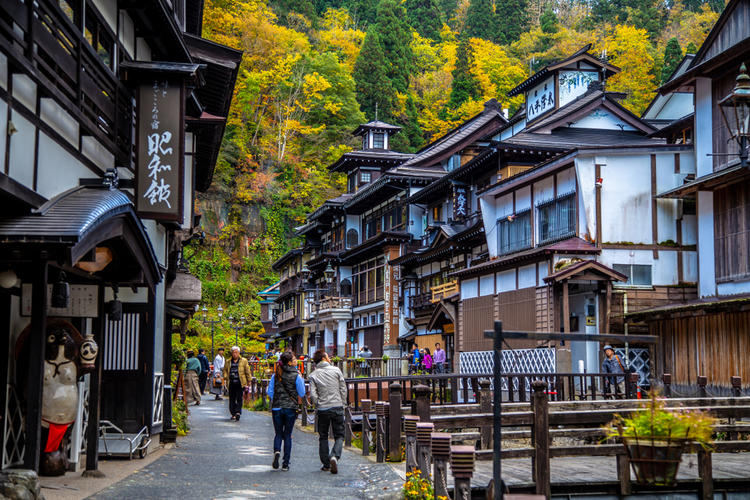 Located in northeastern Japan, Yamagata Prefecture is a mountainous region with nearly two-thirds of its area covered in thick forests. The prefecture is also home to more than 230 waterfalls - more than any other in Japan - earning it the local nickname, “The Kingdom of Waterfalls”. If you're looking for things to do in this nature-rich area, keep reading!

This temple was founded during the Heian period (794 - 1185) in the year 860. It is also referred to as Yama-dera (temple in the mountains), and is actually composed of several temples. Konponkyu-do, the main temple, is located at an elevation of 538m. Its iconic red pagoda, Nokyo-do, is the oldest building on the mountain. The striking color and unique location make it a favorite stop for photo-loving visitors.

It takes 1,015 steps to get to the top of the mountain. Along the way, there are many Buddhist statues and stone monuments carved into the rock walls that will keep the trek interesting.

Ginzan Hot Springs (Ginzan Onsen) is a town that has existed since the 1740s. The snow-covered rooftops in the winter give the town a serene atmosphere. Even if you aren’t staying the night, you'll be glad to know that plenty of the inns there open their baths to day trippers. With plenty of souvenir shops and restaurants in the area, it’s the perfect place to spend a relaxing afternoon.

As you enter the town, you’ll soon see a waterfall called "Shirogane no Taki". This 22m high waterfall is made up of a series of cascades. There are paths running along both sides of the waterfall, making it easy to take stunning pictures from various angles.

On the way to the shrine, you will pass a five-storied pagoda, which is the only national treasure in Yamagata Prefecture. There are many other cultural assets inside the shrine.

Sankyo Warehouse (Sankyo Soko) is a rice storage warehouse that was built way back in 1893 and is still in use today. There are a total of nine warehouses, which altogether store up to 10,800 tons of rice. The nearby Sakata Yumeno Kura is a tourism center where visitors can purchase souvenirs. It also contains the Shonai Rice History Museum, where visitors can view related materials and exhibits.

Zelkova trees are planted behind the warehouse to provide shade. It is a very popular viewing spot, with 36 zelkova trees that are over 150 years old.

Tsuruoka City Kamo Aquarium has the world's largest jellyfish exhibit, with more than 50 species on display. Their main attraction is the Jellyfish Dream Theater, where approximately 2,000 jellyfish are on display, drawing in crowds who visit especially to take pictures of the aquarium’s bright and colorful illuminations.

There are also showcases of fish native to the coastal areas of the Sea of Japan. They also hold events such as sea lion shows and black‐tailed gull feeding experiences.

Another shrine located in the Dewa mountain range is the Gassan Shrine (Gassan-jinja), which is located at the top of Mt. Gassan. From a height of 1,984m, visitors can look down on a sea of clouds (weather permitting). The interior is a holy place, so visitors are not allowed to take pictures past the shrine’s main torii (shrine gate).

Along the ascent, stop by Midagahara, the marshland near the 8th station. It is home to rare animals and plants. From June to July, the marsh is blanketed in a carpet of flowers.

7. The Stone Statues of the Sixteen Arhats (Akumi County)

The Stone Statues of the Sixteen Arhats (Jurokurakan-iwa) is a location on the coast of the Japan Sea in the northern part of Yamagata Prefecture where 22 Buddhist statues have been carved into the cliff. These statues were created over a period of five years from 1864 to 1869. They were made in memory of fishermen who lost their lives in the rough waves of the Sea of Japan, and to pray for maritime safety. The unusual location of the unique carvings makes it a popular destination with tourists.

This is a park that includes the Yamagata Caste Ruins. Yamagata Castle was built in 1356 and has been selected as one of Japan's 100 best castles. The park’s name comes from the alternative name for the castle, which is Kasumiga Castle. The castle earned the new name - which roughly translates to “castle in the mist” - when it was once obscured by fog during a war. There are numerous cultural facilities inside and around the park, such as the Yamagata City Regional Museum and the Yamagata Art Museum.

Kajo Park is also a famous cherry blossom viewing spot, with some 1,500 trees blooming in the spring. The soft pink flowers are illuminated in the evenings, making it worth a visit both during the day and at night.

Takase Gorge (Takase-kyo) is a valley in the northern region of Yamagata Prefecture, where visitors can enjoy fresh green growth in spring and vibrant warm colors in autumn. Hiking is the most popular activity, as there are a number of animals to search for, such as the world's smallest dragonfly - the hatchotomonbo - and native fish such as iwana (char) and yamame (trout).

There are two waterfalls: the Kagetani Falls, which have a jagged shape reminiscent of lightning bolts, and the Otaki Falls, which fall in a straight, elegant line.

Mogami River (Mogami-gawa) is the one of Japan's three major tributaries, and is the longest river in Japan that is contained within a single prefecture. Surrounded by mountains, visitors can enjoy fresh greenery, autumn leaves, or soothing winter scenery depending on the season. Visitors can also go down the river in sightseeing boats that depart from various places along the river with a wide variety of courses.

Shiraito Falls, one of the 100 Waterfalls of Japan, flows right alongside the riverbank. There is much cultural heritage to be seen along the riverbank, depending on the river cruise you select.

Rich in nature, Yamagata Prefecture has plenty of sightseeing spots where the scenery changes according to the season. No matter how many times you visit, you’re guaranteed to get a brand new view. If that sounds interesting to you, definitely check it out the next time you come to Japan!