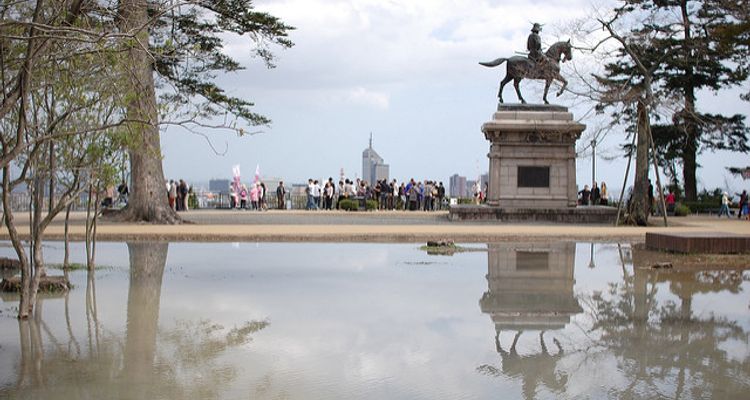 Sendai is where many historical figures like Date Masamune, who made a name for himself during the Sengoku period. To get to know what really happened at that time, this article will guide you through some of the historical spots in Sendai.

Sendai, a city in Miyagi’s prefecture is where you will find many historical figures like Date Masamune, who made a name for himself during the Sengoku period. This article will introduce to you historical spots in Sendai that will bring you back in time to between 20,000 years ago and to when the 2011 Tohoku earthquake occurred for an unforgettable history lesson. Exactly 400 years ago from today (sometime in 1610), the founding Daimyo of modern Sendai, Date Masamune built this very castle and it is now the current pride and a symbol of Sendai’s prosperity. The original castle itself is no longer around for us to appreciate but you can still see some of its remnants around. From the surroundings of the statue of Date Masamune riding a horse within the premises, you will be able to catch some spectacular views of the city and on a clear day, you might be able to see the Pacific Ocean too. This serves as a mausoleum for the Date clan that governed Sendai. Within its grounds you will have the monumnets, Zuihoden, Kansenden and Zennoden. It was completely destroyed in the war in 1945 but fortunately it has been rebuilt to its original grand architectural style. There is also an museum here for you to view burial accessories that have been excavated. The founder of modern Sendai, Date Masamune, built this Shinto shrine about 400 years ago around 1607 based on the Ishi-no-ma-zukuri architectural style (that makes up one of the many Shinto architectural styles out there) and it is said that this shrine is the oldest surviving one of its kind. The interior and exterior of the building is decorated with beautiful carvings and gold furnishings, creating a grandiose atmosphere. This distillery was built by Nikka Whiskey’s founder, Masataka Taketsuru in 1969 after its first one at Hokkaido’s Yoichi so that he could create and blend fine whiskeys at two different locations. It was said that Taketsuru confirmed the building plans after he found favor in the taste of diluted whiskey with water used from Nikkawa River. The locals call this temple「Jyoge San」and it is said that your prayers for love and safe delivery will be answered if you come here to pay your respects. Rumor also has it that the gods of this temple will grant that very one wish in your life if you come here to pray. 800 years ago, during the war, Taira no Sadayoshi ran to seek refuge in this area and decided to set up a Buddha statue to pray for war victims and that is how the history of this temple started. At the hinterland of a beach that is well-loved by the community here, in the middle of a pinewood forest that was flatten by the tsunami during the 2011 Tohoku earthquake, stands the 9m tall Goddess of Mercy statue, Arahama Jikkei Kannon and a cenotaph that is 2.5m tall. The Goddess of Mercy statue was built at the same height of the tsunami wave that hit the area during the earthquake in 2011. Besides preserving the ruins of Tomizawa, which are made up of ruins from 20 thousand years ago during the Old Stone age and presenting them to the public, this unique museum also actively cultivates long forgotten forests that have been discovered and educates the public on the relationship between man and nature in the past. The experience here will truly bring you back in time to 20 thousand years ago.

This is a preservation site of a big Jomon period village, where you will find Yamada Uenodai ruins that dates back to about 4 thousand year ago. At the premises, you will find a Jomon period vertical cave houses and the same vegetation in that period of time being cultivated. There are also guided activities prepared for visitors like the chance to use ancient tools to make clay pots and stoneware.

With the materials donated by Sendai’s Date clan, this museum serves to preserve, exhibit and research the given materials. In addition to exhibitions on the feudal lors in Sendai and the Date clan, there are also exhibitions on the historic mission called Keicho Embassy（that was a diplomatic trip to Rome and Spain）. Within the museum grounds too there is a statue of Lu Xun to remember the great figure in modern Chinese literature. About a century ago (sometimes during 1904), a leading figure in modern Chinese literature, Lu Xun came all the way to study in Tohoku University’s medical faculty (which was called Sendai Medical School at that time) for a year and a half. Within the premises of Katahira Campus, at one of their lecture halls, stands the statue of Lu Xun. The old residence of Lu Xun also still stands to this day near the main gate of Katahira Campus. In 1998, Jiang Zemin, the president of China has ever visited this historical lecture hall.