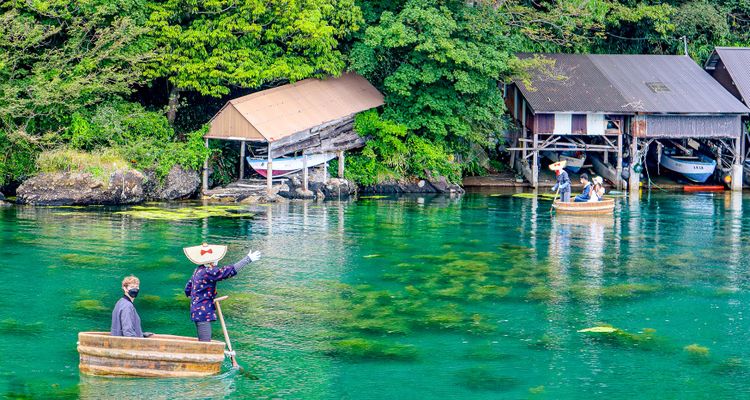 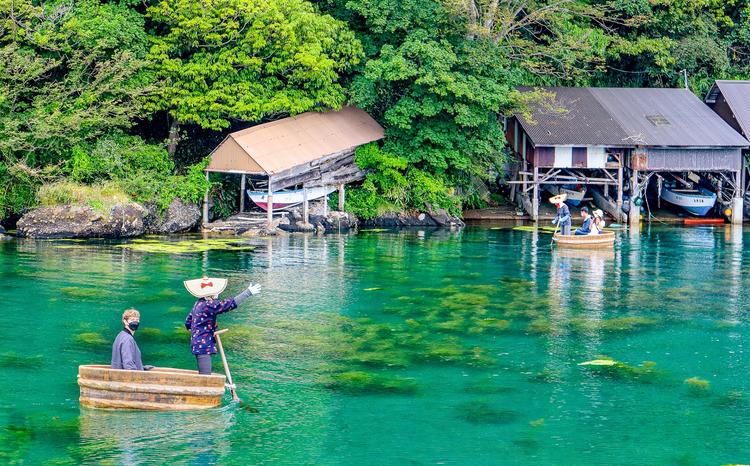 Lush mountains, azure oceans, and pristine wilderness beckon travelers to Sado Island in Niigata Prefecture. While a paradise today, for thousands of years, disgraced criminals, artists, aristocrats, and even fallen emperors were banished to the island, forced to live in lonesome exile. After the discovery of gold, the island transformed into a thriving hub of industry and culture, and now serves as a haven for travelers to explore, relax, and uncover another side of Japan.

Sullen Exile to Vast Wealth: The History of Sado Island

According to the Kojiki, Japan’s earliest chronicle of myths, Sado is the seventh island made by the deities Izanagi and Izanami. In more factual terms, archeological records slate Sado as being inhabited as early as 10,000 years ago.

By the time Japan had reached the Nara period (710–784), and a stronger form of government had begun to consolidate, Sado was recognized as an independent province, and due to its remote location, became designated as an island of exile for so-called “enemies of the state.”

One of the earliest recorded exiles includes the poet Hozumi Asomioyu, who spent 18 years on the island between 722-740 after criticizing the Imperial family. Another notable resident of Sado was Emperor Juntoku, who was defeated in a political uprising in 1221, and was banished to the island where he eventually passed away.

Up until the Heian period (794 - 1185), aside from the occasional prisoner, life on Sado was relatively quiet. However, having discovered that the island was sitting on what seemed like an inexhaustible source of gold and silver, military dictator Ieyasu Tokugawa brought the island under his direct control and, in 1601, set up a massive mining operation on a scale unseen by the likes of Japan.

The lucrative gold mining industry on Sado directly financed the shogunate (military government), and at its peak, 400 kg of gold and 40 tons of silver were mined annually. In fact, the amount of silver mined on Sado once accounted for up to 20% of the entire world’s production.

Engineers, technicians, carpenters, and of course, miners, from all over Japan flocked to the island to claim their part in Japan’s gold rush. To support the booming industry, a healthy flow of merchants, tradespeople, fishermen, and government officials followed suit, and before long, what was once a remote island of isolation became a bustling epicenter of productivity.

In 1896, during the Meiji period (1868-1912) after the fall of the shogunate, the company Mitsubishi purchased the mines from the government. With a newly backed yen based on the gold standard, Japan’s economic situation was better than ever on the world stage, and the wealth of Sado was used to finance the military expansion of Japan throughout World War II.

Unfortunately, no natural resource lasts. Years of continuous digging had taken its toll on the island. Species such as the Japanese crested ibis nearly went extinct due to the environmental degradation, and residents began leaving as gold supplies ran low and the promise of agricultural self-sufficiency became doubtful.

By 1952, most mines had been abandoned, and only 10% of all mining employees remained on the island. In 1989, the last of the mines completely shut down, and the focus shifted away from mining and towards a bright future of tourism. On January 28th, 2022, Japanese Prime Minister Fumio Kishida announced plans to nominate the Sado Gold Mine as an official UNESCO World Heritage Site.

The Rich Cultural Legacies of Sado

Despite being a remote island, much of Sado’s unique cultural elements have spread far beyond its borders, permeating not just the Japanese mainland, but the entire world.

In 1434, an actor by the name of Zeami invoked the shogun’s wrath and was sentenced to exile on Sado Island. Using his time on the island productively, Zeami continued to perfect the art of “noh theater,” and is now revered as the father of this ancient performing art. However, despite this profound connection, noh theater itself actually blossomed across the island during the Edo period (1603-1868), after the first Commissioner of Sado, Nagayasu Okubo, brought two actors from Nara with him to Sado.

Even today, Sado is worshiped as holy ground for noh in Japan, and there are performances across the island during festivals, celebrations, or just when the mood feels right. There are more than thirty noh stages dotting the island today, eight of which   continue to hold performances at various times of year. However, official English information is scarce, so timing your trip with a performance may prove difficult. One of the safest bets is Shiizaki Suwa Shrine, which hosts noh on Saturdays at the beginning of each month between May and October (excluding August).

Another performance-based legacy hailing from Sado is “Kodo,” the world-renowned taiko drum ensemble. Since its conception in 1981, this legendary group has performed over 6,500 times in 53 countries. They use music and art to remind audiences of the common bonds we all share, bringing us closer together.

Kodo taiko can be experienced first-hand at the Sado Island Taiko Centre, where visitors can join taiko drumming classes, alongside traditional chopstick and soba-making workshops.

Sado is well known for its vibrant culinary scene, with local rice, sake, seafood, and beef sought all throughout Japan for their superb freshness and quality. Persimmons, pears, and figs also thrive on the island, and “ten-nen burikatsu-don,” a bowl of fried yellowtail tuna, is a scrumptious one-of-a-kind treat! Additionally, there are a whopping five sake breweries on the island, each with their own unique character and brew. This includes “Hokusetsu Shuzo,” whose exquisite “YK35” sake is considered a masterpiece of brewing.

Where To Visit on Sado Island

Dive into 400 years of history amongst the maze of Sado's mines! These hand-dug tunnels from the Edo and Meiji periods have been painstakingly preserved, serving to educate visitors on the brutal conditions miners of the time faced. The tunnels descend deep into the earth, showcasing the equipment, tools, and mining methods through eerily lifelike animatronic dioramas.

Straight out of Studio Ghibli’s "Castle in the Sky," the Kitazawa Flotation Plant Ruins are the mossy remains of an ore processing facility, the first of its kind in Japan. In its heyday, the plant processed over 50,000 tons of raw ore each month, using a process called “flotation” to sift out the gold. Today, nature has reclaimed its space, and visitors are welcome to take pictures with Sado’s very own Laputa (just refrain from entering the ruins.) At night, the scene is enhanced by enchanting light-ups and periodic projection mapping.

For many, the most recognizable icon of Sado are the unique “tarai-bune.” These ovular bucket-boats have been used for centuries by female divers to navigate the craggy coasts while collecting seaweed and shellfish. While tarai-bune culture is dying out, visitors can still experience a ride at the Yajima Taiken Koryukan in Ogi Harbor.

Shukunegi is a picturesque settlement of around 100 rustic wooden houses on the coast of southern Sado. Despite their age, many houses remain inhabited by descendants of settlers from the mid-1800s, imbuing the township with a deeply historical ambiance. They are largely made from wood repurposed from old ships and freight vessels, and today visitors are free to wander the maze-like alleyways to relish the surreal feeling of stepping back in time.

Strike your own fortune at Sado’s Nishimikawa Gold Park, located on the site of the former Nishimikawa Gold Dust Mine! A family-friendly activity, visitors can experience sifting for gold dust just as the pioneers did back in the Edo period. You can take home the gold dust you find as a souvenir, or turn it into a flashy keychain or necklace.

In 2003, the Japanese crested ibis (known as the “toki” in Japanese) was declared extinct in the wild. However, thanks to an artificial insemination project, the toki population was revived and a sanctuary was founded on Sado. At Toki Forest Park, you can witness these magnificent birds in all their glory, while discovering the remarkable efforts behind their revival at the museum and preservation hall.

Other Highlights of Sado

If you’re looking to cool off, especially during summertime, Futatsugame Beach is one of Sado’s most famous swimming spots. For its crystal clear water and stunning scenery, it was selected as one of Japan’s 100 Sea-Bathing Spots, and awarded two stars by the Michelin Green Guide.

Also along the coast is Senkakuwan Bay, a series of strikingly steep cliffs accompanied by a dynamic marine park. Visitors can enjoy the view from either atop the precipice or on a leisure boat tour along the coast.

Onogame is a 167-meter-high turtle-shaped boulder projecting into the sea surrounded by idyllic grassy fields. Between late May to early June, bright orange flowers carpet the area, making for stunning scenery.

Myosenji Temple enjoys a deep connection with Nichiren Buddhism, the founder of which was exiled to Sado. It also boasts the only five-story pagoda in Niigata Prefecture, and its rustic, homely temple grounds once served as the residence of the deputy governor of Sado.

Getting To and Around Sado Island

Alongside the car ferry, there is also the “jetfoil,” often dubbed a “sea airplane” due to its high speed. While slightly more expensive than the car ferry, the jetfoil can reduce the journey between Niigata City and Sado to around 65 minutes.

However, as the island lacks comprehensive public transport, many opt to tour Sado via their own ride courtesy of the car ferry. Sado is surprisingly big, around the size of Singapore and larger than the 23 wards of Tokyo, which is why a car is the optimal method for transport. That being said, if you don’t drive, there are plenty of other options such as tour buses, e-bikes, private taxis, and public buses. However, if you’re trying to fit in a full schedule, relying on public transit alone may prove difficult, as most buses only come once an hour at most.

Enjoy the Diverse Wonders of Sado!

Despite a turbulent past, Sado is now a paradise of relaxation, adventure, and discovery. Although a little off the beaten trail, promises of profound history, unique culture, and fabulous cuisine continue to lure travelers off the mainland in search of a lesser-known Japan.