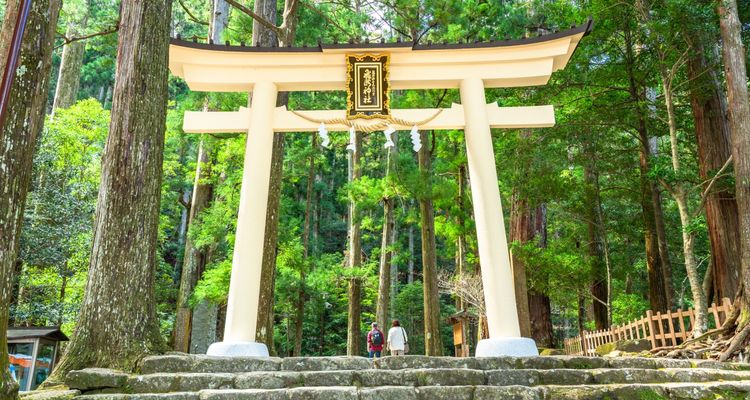 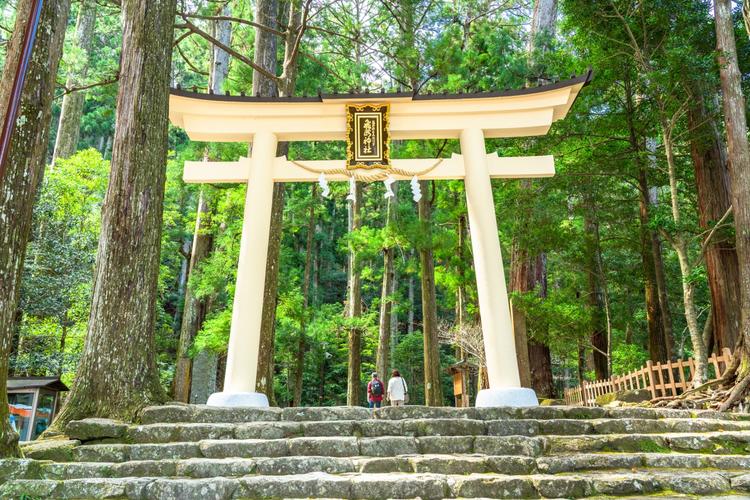 In Japan, “power spots” are locations of strong spiritual energy famed for their rejuvenating abilities. Often complemented by striking natural beauty and historical significance, power spots are popular with those seeking to be healed, blessed, or reinvigorated. Read on to discover which power spots you should visit on your next trip to Japan!

The English phrase “power spot,” pronounced as “pawa-supotto” in Japanese, has grown into its own unique meaning in Japan. It refers to places with strong spiritual energy, often with a temple or shrine nearby. Many power spots are also entwined with an ancient myth or legend, and are common in areas of remarkable natural beauty.

Power spots are popular destinations for Japanese people to recharge after being drained by the stresses of everyday life, or as a place to pray for healing. Some also have specific spiritual properties, like good fortune in marriage or protection from bad luck. Even if you’re a non-believer, power spots offer fantastic insight into Japanese culture, history, and often align with general sightseeing itineraries. While Japan is home to an ever-growing and virtually endless collection of power spots, we’ve curated a round up of some of the most well-known and reputable. Find one that catches your eye, and add a sprinkling of spiritualism to your Japan itinerary!

It’s not at all surprising that Japan’s most recognizable natural landmark is also one of its strongest power spots. Even looking at Mt. Fuji from a distance, you can feel its powerful presence enveloping you. There are also many temples and shrines on and around Mt. Fuji considered power spots on their own, so you can really take your time to explore the area and fully recharge.

Many of these power spots are said to bring good fortune in love. For example, Kitaguchi Hongu Fuji Sengen Shrine, located at the foot of Mt. Fuji, and Tenjo Bell, at the top of Mt. Fuji Panoramic Ropeway, are both said to offer blessings and luck in love. Pictured above is the view from Kurumayama Shrine, which is all the way in Nagano Prefecture, over 100 km away, showcasing just how far the power of Mt. Fuji can reach!

Toshogu Shrine is a sprawling shrine complex seamlessly blending with its lush mountainous surroundings. It is said that the energy here brings good fortune to everyone who visits - which is a substantial number of people, considering its status as one of Japan’s most well-known UNESCO World Heritage Sites.

Amongst other things, Toshogu Shrine is famed as the place where Ieyasu Tokugawa, the first shogun of the Edo period (1603-1868), is enshrined. This makes it a great destination for those seeking both deep spiritualism and profound history.

Meiji Shrine, located in Yoyogi Park, is a classic Tokyo sightseeing staple. Encased by tranquil forest, it’s the perfect place to take a break from hectic city life. Alongside the enchanting shrine itself, the lesser-known Inner Gardens are where the strongest power spots lie.

These gorgeous gardens offer a calming space to soak in positive energy, with plenty of highlights including Kiyomasa’s Well, known for bestowing strength. Rumored to have been dug by an early Edo period feudal lord named Kato Kiyomasa, the water in the well remains at an agreeable 15℃ no matter the season. You can simply dip your hand in its clear, cool waters to receive a blessing.

Kuzuryu Shrine, located in the sightseeing hub of Hakone, honors the nine-headed dragon said to reside in the nearby Lake Ashi. To this day, a festival is held at the shrine on the 13th of every month, with a major festival on June 13, offering prayers to the dragon in return for its protection. It is often considered part of the larger Hakone Shrine complex, most famous for its floating torii gate.

This power spot is perfect for all kinds of people, as it is said to bring luck in both your professional and personal life. As Hakone itself is a famous hot spring resort town, you can enjoy a soak after your shrine visit to take your relaxation to the next level!

Mt. Kurama, to the north of Kyoto City, is a mountain with a long and rich history of folk stories. It is said to be the home of “tengu” goblins, and according to legend, 6.5 million years ago, a supernatural power came down from Venus and blessed it with strong spiritual powers that remain to this day.

In fact, Mt. Kurama is the birthplace of “reiki,” whose creator, Mikao Usui, is said to have isolated himself here when he came up with the energy healing technique. As you can see, Mt. Kurama is clearly the power spot to visit if you’re in need of aid!

Despite being one of the most popular shrines in Kanagawa, Samukawa Shrine remains shrouded in mystery. Not even the details of the deities enshrined here are fully known, and while written records indicate it being rebuilt in 727, the date of its establishment remains an enigma.

What is believed, however, is that if you pray to the shrine’s unique virtues of “Happo-yoke,” you will be protected from bad luck of all kinds. If you’ve been feeling a little unlucky recently, a visit to Samukawa Shrine might just turn your fortunes around!

Kumano Sanzan is made up of three grand shrines deep in the Kii Mountain Range. They are joined by a series of ancient pilgrimage trails called the Kumano Kodo, which is a UNESCO World Heritage site. The Kumano region was once considered the dwelling place of gods, and those who made the pilgrimages in the past were said to be searching for heaven on earth. The whole area is full of astounding natural beauty, making it the perfect power spot for those seeking a deep recharge.

Those wishing to hike the Kumano Kodo have a number of different trails to choose from. The Nakahechi Main Route, one of the most popular trails, stretches about 38 km from Takijiri to Kumano Hongu Taisha Grand Shrine and takes around two days. If you can spare an extra two days, you can continue on towards the iconic Kumano Nachi Taisha Grand Shrine. Another popular trail is the Iseji Route, which takes you from Kumano Sanzan to Ise Grand Shrine along the east coast of the Kii Peninsula. The Iseji Route is around 170 km long and takes approximately 7 days, so it’s definitely one for more experienced hikers.

Izumo Grand Shrine is one of the oldest and most important shrines in all of Japan. There are records of it from as far back as the early 700s, although no one knows exactly when it was first established. The deity enshrined, Okuninushi, is considered to be the creator of the land of Japan and a deity of ‘fate.’

According to legend, for one week in November, all the deities (a whopping 8 million!) from across Japan gather at Izumo Grand Shrine to discuss the fate of humans. During this time, the shrine holds the solemn Kamiari Festival to celebrate the occasion, drawing worshippers from across the country. As these deities plan the relationships of their subjects, this is considered a great time to visit to pray for strong marriages and relationships.

Mt. Aso is one of the world’s largest caldera (volcanic craters), big enough to hold five mountains and a sprawling basin with multiple towns within. One of these mountains, Mt. Nakadake, is an active volcano, and is worshiped as a powerful deity.

As the area is so large, there are dozens of power spots - such as Oshitoishi, the Hill of Stones, where it is said that touching a stone will heal your heart. The Cedar of Lord Takamori, another frequented power spot, is home to a pair of 400-year-old cedar trees that are said to bring good fortune in marriage. There is also Aso Shrine, which boasts over 2,000 years of history, where couples can receive blessings in marriage. Unfortunately, Aso Shrine suffered damage in the 2016 Kumamoto Earthquake, and repairs are due to be completed in 2023.

Note: Due to active volcanos, it is important to check safety information before visiting Mt. Aso. This can be done by visiting the website below, accessible in English and Japanese.

The remote Takachiho Gorge is adored for its surreal natural beauty. The Gokase River runs through the gorge, enclosed by steep cliffs formed over 100,000 years ago by the rapid cooling of lava from an eruption at Mt. Aso. It’s a great place to stroll, unwind, and explore in one of the rowboats for hire.

There are several power spots around Takachiho Gorge, including Amano Iwato Shrine, a large complex split in half by the Iwato River. Walking along the river, you will find Amano Yasugawara, a cave with a small shrine said to be where the gods gathered to figure out how to draw the sun goddess Amaterasu out from hiding. This otherworldly cave is unlike anything else in Japan, filling one with utter serenity.

The 1900-year-old Takachiho Shrine is a 20 min drive away, which is visited for its nightly traditional “kagura” performances. The sacred “Meoto Sugi” of two cedar trees growing from the same trunk is the shrine’s beloved icon. Legend goes that if couples hold hands and walk around the trees three times, they will be blessed.

Ise Grand Shrine is one of Japan’s holiest Shinto shrines, and a leading power spot. The site is believed to have been founded 2,000 years ago by a daughter of the Emperor Suinin, who was searching for a permanent place to enshrine the sun goddess Amaterasu. Later, the shrines making up the modern complex were built, and it is said that Amaterasu still dwells in one of them, along with the sacred mirror gifted to the first emperor of Japan.

This power spot is a popular place for politicians to visit and pray for good fortune regarding national issues. Of course, ordinary people regularly visit too, often praying for good luck and healing.

Mt. Osore is another active volcano, although this one last erupted tens of thousands of years ago. It is the site of an ancient temple and considered one of the most sacred places in Japan. Thanks in part to the barren landscape and heavy smell of sulfur in the air, Mt. Osore is heavily associated with the afterlife, in particular hell. In fact, it is said to be the location of one of the gates to the underworld. If you visit during one of the twice yearly festivals, held in summer and autumn, you may even have a chance to communicate with the spirits of the dead!

With a huge selection of power spots all over Japan, you’ll be spoiled for choice. Whether you’re in need of some luck, or a break to recharge, there’s sure to be a power spot that suits your needs!