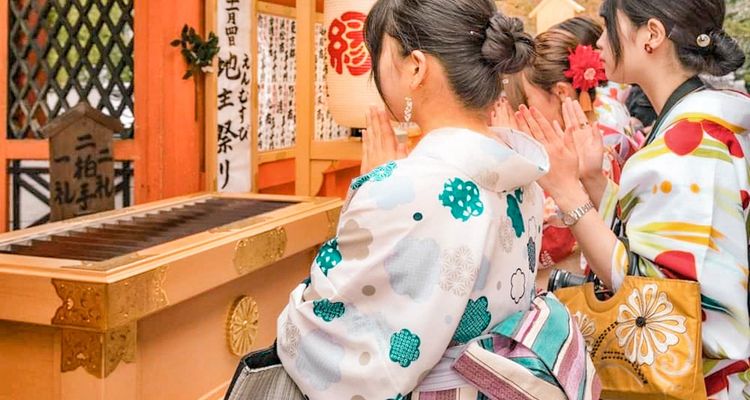 The Differences Between Praying at Shrines and Temples in Japan

High upon the to-do list of most tourists in Japan is to visit one of the country’s many beautiful and historic shrines or temples. With over 155,000 to choose from throughout Japan, finding one is far easier than figuring out what to do once you get there. In this article, we’re going to break down the key differences between shrines and temples and explain how to pray at each.

What is a Shrine?

Shrines, which serve as places of Shinto worship, originated in Japan. There are over 80,000 across the country; slightly outnumbering temples at around 75,000.

In the Shinto faith, there are many gods, most of whom can be found in the natural world. It is not uncommon to come across gods of rivers, mountains, trees and more. Because of this, shrines are typically places of natural refuge. They can be easily recognized by the presence of a torii gate at the entrance, which are often painted bright red or orange. These gates serve as a dividing line between the physical and spiritual worlds.

What is a Temple?

Unlike shrines, temples got their start in China and India before arriving in Japan. They are places of Buddhist worship and occasionally serve as burial grounds as well.

Where shrines are marked with a relatively simple torii gate, temple gates can often be massive wooden structures with sloping roofs and ornate tiling. On either side of these gates, visitors can expect to be greeted by muscular deities known as Nio Guardians, which protect the temple from evil spirits. Lastly, since temples are intended to worship Buddha, they will always be home to at least one sacred Buddha statue.

Which One Should I Visit?

Though Shinto is the ethnic religion of Japan, Japanese people tend to visit shrines and temples interchangeably. While both have their merits and are architecturally beautiful in their own ways, if your intention is to pray, they tend to serve slightly different purposes.

Where shrines are heavily influenced by nature, they typically deal with matters pertaining to life and the physical world. It’s not uncommon to see celebrations such as weddings or coming of age ceremonies held here. If you want to pray for a happy life, health, good luck at a job interview or anything of the like, a shrine is most likely the best choice for you.

On the other hand, temples focus primarily on spiritual matters and issues of the afterlife. Here, visitors typically pray for family members who have passed away and hold remembrance ceremonies for the deceased.

How to Pray at a Shrine

Before praying at a shrine, there are a few simple etiquette rules that you should keep in mind.

How to Pray at a Temple

On the surface, praying at a temple may look the same as doing so at a shrine, but there are a few key differences to keep in mind.

A visit to a shrine or temple is a quintessential Japanese experience and a must-do on your vacation to Japan. The proper prayer etiquette described above may seem like a lot to remember, but when in doubt, keep an eye on the people around you and follow their lead! As long as you are respectful during your visit, no one will mind if you forget a step or two.