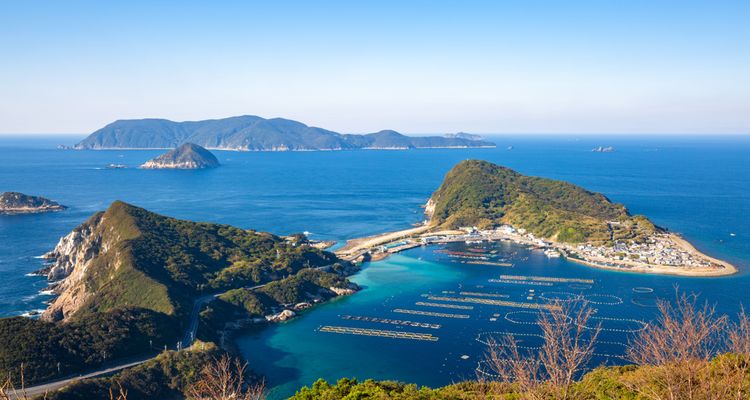 Covering most of southern Shikoku, the smallest of Japan’s four main islands, Kochi is a prefecture known for its natural beauty. With its sandy beaches, rich nature, and historical townscapes, it is a popular location for outdoor activities. To help you explore the best of Kochi, we’ve chosen 10 sights you won’t want to miss.

Niyodogawa is a small town, situated near the source of Niyodo River, that prides itself on its tea production. A visit to the town will give you the chance to catch a glimpse of a small town life in Japan while taking in the area's breathtaking scenery.

This waterfall is widely known as "Niyodo Blue" due to its beautiful and mystical blue colors. When the sun shines onto the water at just the right angle, the light creates a scene from that looks like it's from a fairytale.

Amidst the mountain forests of Mt. Ishizuchi,  the tallest mountain in western Japan, lies the beautiful Yasui Valley. The rocky riverbed here spreads out over 10 kilometers, and with its blueish color you’ll feel as if the sky is all around you. This site also has ties to ancient traditions such as “Yasui Kagura,” a type of Noh dance, as well as various writers. This spot is a natural beauty all year round, thanks to its fresh greenery in spring and the autumn foliage in fall.

Famous as a spot for viewing autumn leaves, Nakatsu Valley is a natural work of art, formed as a result of rainfall flowing through the valley. This site is home to a series of breathtaking views including Momiji Falls, Uryu Falls, and Ryugubuchi Falls. There’s something to enjoy in any season as you walk along the valley’s 2.3 kilometer promenade, whether its the mild temperature of the water in spring or its the crystal clear color in summer, or seeing the area lit up in red foliage in fall or frozen over in winter.

Shimanto River is Shikoku's longest river. With its source on Mt. Irazu at Tsuno, it passes through the towns of Nakatosa, Shimanto-cho, and Shimanto City, spanning a total of 196 kilometers. Although it is famous for being the "last clear river in Japan," it is also home to traditional fishing activities such as Hiburi-ryo, where fishermen catch sweetfish by torchlight, and Shibazuke, a technique involving placing bundles of bamboo branches in the water.

In the heart of Kochi City lies a classic example of a hirayama-jiro, a type of Japanese castle built on a hill surrounded by a plain. Built in 1601 Kochi Castle is a stunning example of the Edo era's elegant architecture, and some of its structures such as the Ote-mon Gate and the castle tower have been designated as Important Cultural Properties. Having survived several natural disasters and WW2, the castle has gained a reputation as one of the most formidable fortresses in Japan.

At the mouth of Urado Bay, stretched out into a crescent shape between Cape Ryuzu and Cape Ryuo, lies Katsurahama Beach. With its colorful gravel beach and deep blue ocean contrasting against a backdrop of dark green pine groves, this is the perfect example of the incredible scenery Kochi has to offer.

Sakamoto Ryoma was a Kochi-born revolutionary who became one of the most important figures in bringing down the Tokugawa regime. He has become greatly admired for his efforts to create a more equal Japan during the Edo era and, although he was a skilled swordsman, he never resorted to violence in doing so. This statue of him was unveiled in 1929 thanks to the fundraising and efforts of Kochi's youth.

Also known as Ryuogu Shrine, Watatsumi Shrine (Watatsumi Jinja) is a small but lovely shrine, which is dedicated to the goddess of oceans 'Watatsumi'. Here people pray for safety at sea and to ask for their wishes of love to be fulfilled. Located at the end of Katsurahama Beach, the view from the top of its hill is beautiful.

This natural beauty is the result of earthquakes that occured around 3 million years ago. causing rock layers to rise, and has been shaped by sea erosion. As it's only a 30-minute drive away from Kochi Ryoma Airport, this secluded area is easily one of the most accessible in Japan, and is therefore perfect for escaping Japan’s bustling city life. Enter the cave and you’ll be greeted with a cool temperature all year round, and be able to admire the clusters of fern here that have been designated as a National Natural Treasure.

In 724, the Emperor Shomu had a dream that he worshipped Buddha on China's Mt. Wutai and ordered a priest to find a similar mountain in Japan. After he chose Mt. Godai (Godai-san), the priest founded Chikurin-ji Temple not long after. When you reach the temple after a steep walk, you'll soon understand why, the mountain forest scenery creates a serene atmosphere and the air quality feels refreshing due to the high altitude. This is also a good spot for viewing cherry blossom and fall colours especially with the backdrop of the temple's five-storied pagoda.

The Makino Botanical Garden opened in 1958 to honor the achievements of Dr. Makino, a Kochi-born botanist known as the "Father of Japanese Botany." There is a museum dedicated to his life here, as well as an outdoor garden where you can spend hours walking along its many paths and a conservatory with a stunning collection of orchids.

Kashiwajima is a small 4 kilometer island on the southwestern tip of Otsuki. The island has become a popular spot for camping and water activities in the summer. The beauty of the surrounding Pacific Ocean and the 1000 species of fish that live here mean that this is a perfect spot for scuba diving, and you can also admire views of Okinoshima Island and Ugurushima Island. The island is also known as the filming location of the 2003 Japanese film "Tsuribaka Nisshi 14."

At around 300 meters above Shimanto River, Iwamoto-ji Temple offers a fantastic view of Shimanto Town and its surrounding area. The temple was built to worship five different deities, and is known for its unique ceiling art, which displays 575 images ranging from scenes of Japanese nature to Buddhist saints. These were selected through a nationwide competition in 1978 when the temple was undergoing reconstruction.

Using the beauty of Kochi's mountain, river and ocean landscape, Monet's Garden recreates the world of French arist Monet's paintings. There are three different gardens here, the colorful Flower Garden, the elegant Water Garden with its blue water lillies, and the Light Garden, inspired by Monet's love of the Mediterranean.

A prefecture renowned for its pristine rivers and authentic architecture, Kochi is truly a place where you can experience the best of Japan's beauty. Due to its location at the southern tip of the island of Shikoku, you can explore mountains, beaches, and forests all in one day!