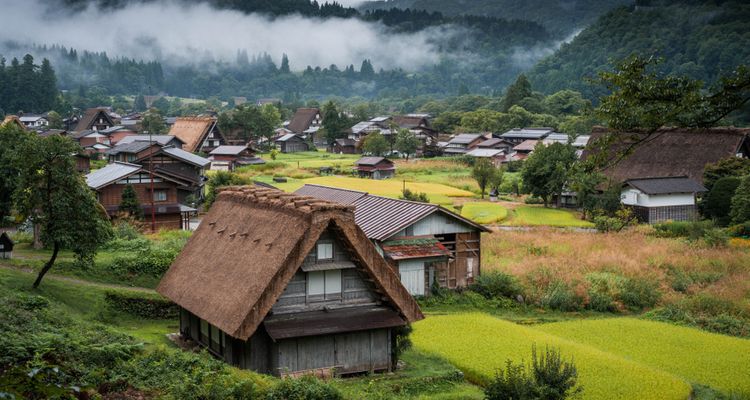 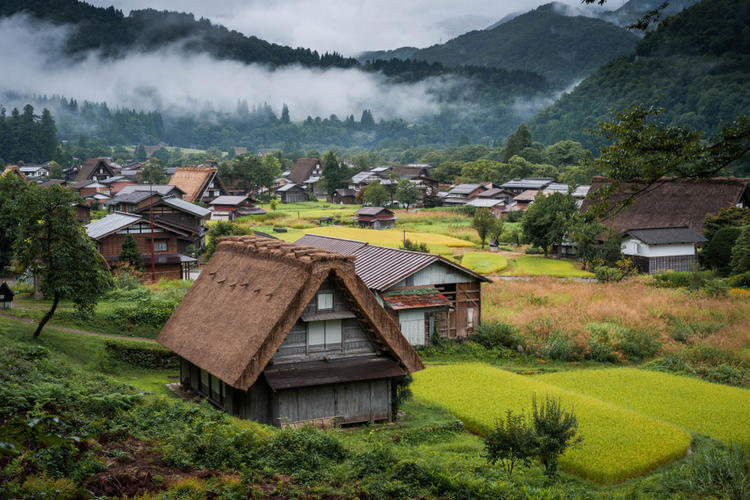 Immerse Yourself in Toyama's Nature at These 9 Must-Visit Scenic Locales!

The mountainous Toyama Prefecture is full of breathtaking scenery, from invigorating meadows that thrive during the short summer to great walls of snow that tell tales of tremendous snowfall and villages that speak of Japan's early days. These landscapes will captivate your heart! It's time to embark on a journey to Toyama, Japan's treasury of breathtaking views. Take a look at these 9 must-visit spots that showcase the best of Toyama's nature.

Even amidst all the superb views of Toyama Prefecture, Kurobe Dam is a sight to behold. The stunning arch-shaped dam boats the tallest height in all of Japan at 186 meters, and stores approximately 200 million cubic meters of water. There is an observation deck situated approximately 1508 meters above sea level, and from there you can look out over the colossal structure and beautiful lake. Beyond that, you can also see the magnificent outline of the Northern Alps, including the peaks of Tateyama. You could say that this scenic spot is a fusion of nature and construction.

Kurobe Dam's highlight attraction is its spectacular spillway, where than 10 tons of water are drained from the 1.5-meter valve every second. There are a number of viewing spots to see the spillway, but the best spot is the 492m long dam weir. From the dam weir, you can view the spillway from directly above and experience its breathtaking power. If the weather conditions are right, you may even see a rainbow. Go to the new observation deck if you want to get a closer look at the spillway.

There are around 40 small villages in Gokayama, located in the southwestern tip of Toyama Prefecture. The houses were built in the gassho-zukuri style, which describes the way the thatched roofs look like hands clasped in prayer. They were originally constructed during the Edo and Meiji periods, and are still maintained to this day with some being used as restaurants and guest houses for visitors to the area. The quiet mountain village setting has a nostalgic feel. Gokayama's Ainokura and Suganuma villages, along with Shirakawa-go Ogimachi Village in Gifu Prefecture, were listed as World Heritage Sites in 1995. Gokayama's mountain villages are winning the hearts of visitors from all over the world with their traditional atmosphere.

Suganuma Village is a small village along Shogawa River.  On the other hand, Ainokura Village is an isolated mountain village, consisting of 20 of the original gassho-zukuri style houses.  Both villages back onto the steep mountain slopes, so to protect the villages from avalanches, the large trees such as Japanese beech and horse-chestnut trees are kept to act as a forest barrier. If you want to get a view of the village, there is a viewing spot nearby. You can admire the village nestled amongst the surrounding mountains. The flower blooming season and autumn foliage season are lovely, but the gassho-zukuri are built to endure the snowfall. The outline of the village blanketed in pure white snow is a sight you shouldn't miss.

The Midagahara Plateau is like being in another world. This is a gently sloping subalpine plateau, stretching 3km north to south and 9km east to west, located 1600 - 2000 meters above sea level along the Tateyama Kurobe Alpine Route. The wetlands here have also been designated as a Ramsar site (wetland site designated to be of international importance under the Ramsar Convention), and as you walk along the wooden path, you will see the series of puddle-like ponds, known as "Gaki no Ta". In the short-lived summer you will encounter the pretty alpine plants as they grow in earnest, and in the fall the plateau is adorned with the brilliant colors of the trees changing color.

Summer on Midagahara Plateau reveals a treasure trove of alpine plants. A dream-like scene spreads out before you as the lovely white flowers of the hare's-tail cotton grass make the ground appear to be covered in snow. The breeze blowing across the plateau is fresh and comforting, and many hikers visit the plateau in search of this breathtaking view. There is no word to describe the beauty of the brief mountain summer. This picturesque landscape will teach you the true magnificence of nature.

The pristine surface of this azure lake mirrors the 3000-meter mountains of the Northern Alps. This view can be found at an altitude of 2400 meters, and will have you spellbound in an instant.  This lake, with its air of mystique, is the biggest lake at Murodo, and is one of the high points of the Murodo area of the Tateyama Kurobe Alpine Route. It is easily accessible by walking from the Murodo Terminal. As it is entirely covered with snow during winter, it is best to visit between summer and autumn.

Toyama is a prominent part of Japan's "snow country." Murodo is the highest point along the Tateyama Kurobe Alpine Route, at an altitude of 2450 meters. It has a heavy snowfall that exceeds 20 meters every year, so Otani at Murodo becomes a snowdrift. A snowplow digs through to clear the Tateyama Plateau Bus Road that passes through Otani. This road, which is created for about 1 month of the year, is the famous "Yuki no Otani" (snow valley). The giant wall of snow makes for an impressive sight to behold!

The Yuki no Otani is an approximately 500-meter section of road walled by snow. It opens from mid-April to mid-June, immediately following the reopening of the entire Tateyama Kurobe Alpine Route that is closed off during snow season. Along the way there is a panorama course which can't be accessed during snow season. If you take this path you can see the snowy peaks of Tateyama. The surroundings of the Murodo Terminal in the direction of Yuki no Otani are also still covered with snow. On a clear day, even here, the vast snow-covered landscape stretches out before you and you can see the three peaks of Tateyama.

The V-shaped Kurobe Gorge is Japan's deepest gorge. It is incredibly steep, yet still reveals the beautiful scenery of the four seasons from time to time. If you want to see the Kurobe Gorge for yourself, take the Kurobe Gorge Railroad. The sightseeing train, nicknamed the "trolly train," travels 20.1km from Unazuki Station to Keyakidaira Station, taking approximately 1 hour and 20 minutes. As the train emerges from tunnels and spans bridges, Kurobe Gorge's scenic spots will be revealed before your eyes. One of these is the old Yamabiko Bridge near Unazuki Onsen that was once used by the trolley train. If you visit when the leaves are changing color during the autumn, you're sure to capture some stunning photographs when crossing the bridges.

There are two types of passenger car on the trolley train: a type with windows and a type without windows. The type without windows is completely open. You can take in the fresh cool air of the gorge as well as the scenery brimming with nature. On the other hand, the type with windows is perfect for cold or rainy weather. Whenever you cross a bridge, you can get a magnificent view of the valley below. You will fall in love with the scenery of Kurobe Gorge, and even the image of the little engine pulling the passenger cars as you disembark from the train.

One of the specialties of Toyama's Tonami region is tulips. The scenery, decorated with the flowers in their peak, announces the arrival of spring to the Tonami Plain. Visit the Tonami Tulip Park to enjoy these tulips, where approximately 650 varieties and a total of 2.5 million tulips are grown. The flower beds, with the tulips at their best, are a splendid scene painted with reds, yellows, and pinks. Every spring the Tulip Fair is also held here.

In the language of flowers, tulips in general represent love and compassion. Each color has a slightly different meaning, with pink representing the awakening of love, and so on. It can be fun to try learning about the language of flowers. The brightly hued flowers can also bring people joy. Directly beside the park is the Tulip Four Seasons Gallery, where tulips bloom year-round, so there's no need to worry if you miss tulip season. Here you can find out about the history, culture, and bulb science of growing tulips.

Amaharashi Beach is known for attracting one the great Manyoshu poets, Otomo no Yakamochi, with its beauty and numerous poems are composed about it. It is a picturesque place located in Toyama Bay, with white sand, green pines, and a reef. From this beach in Noto Peninsula National Park, if the weather is nice, you can see the Tateyama Mountain Range still capped with snow, rising up from the edge of Toyama Bay. This spectacular scene is a genuine marvel of nature's beauty. Being able to see 3000m tall mountains from a beach is a rare thing in this world!

Perhaps part of the superb view at Amaharashi Beach is the shape of the train running along the coastal JR Himi Line. The train running between Etchu-Kokubu Station and Amaharashi Station with the natural landscape as a backdrop creates a deep impression. Another aspect of the famous view at Amaharashi Beach are the rocks called Yoshitsune Rock, Otoko-iwa (literally man rock) and Onna-iwa (literally woman rock). Yoshitsune Rock, according to legend, is a rock under which the famed samurai Minamoto no Yoshitsune took shelter from a sudden rainstorm. That is also how the beach came to be known as Amaharashi, which means "rain clearing". The famous haiku poet Matsuo Basho also used this picturesque landscape as a setting in "The Narrow Road to The Deep North."

Oiwa in Kamiichi is a rocky area (its name literally means 'big rock'). The Shingon Himitsu Buddhist sect's Oiwasan Nissekiji Temple is here, and nearby you will find Sengankei, which means 'the vale of a thousand rocks'. At this valley, which is also called 'hundred waterfall valley,' rocks of various shapes stand in a row, and between them flow waterfalls, as if weaving them together. The water that flows between the various sized rocks covered with lush green moss causing it to splash, creates a magical atmosphere which mesmerises viewers.  Sengankei is a refreshing place, as it feels nice and cool even in the summer. Embrace the concept of 'forest therapy’ and heal your mind and body in this picture-perfect landscape.

Enjoy Nature to the Fullest!

Let Toyama be the destination of your next scenic trip. A multitude of colorful landscapes, from mountains and gorges to plains and sea shores, await you, including the impressive Tateyama Kurobe Alpine Route.