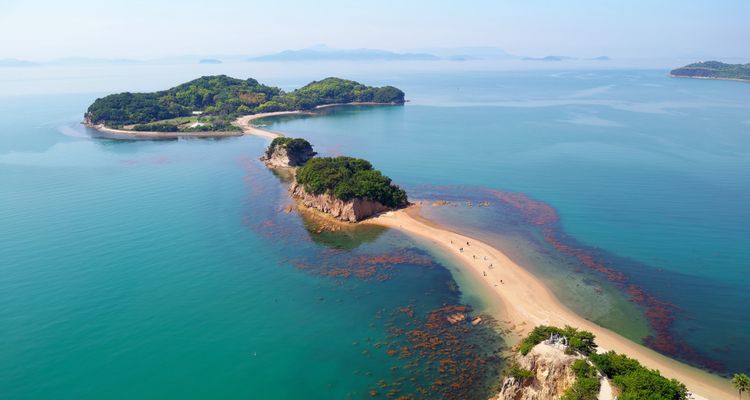 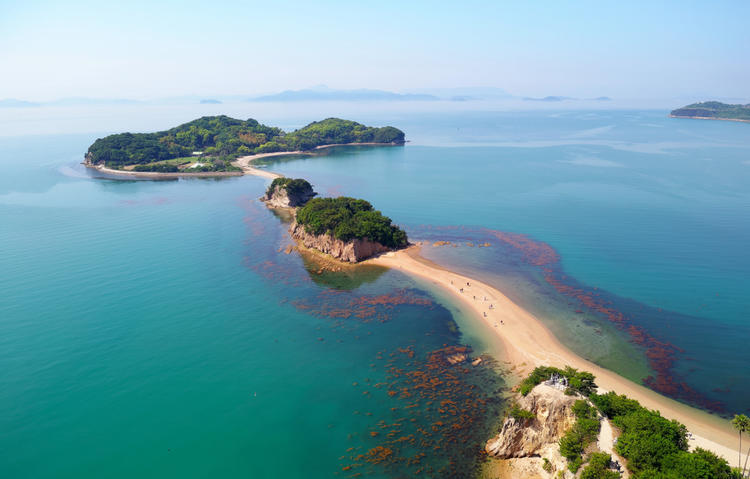 12 Places to Visit in Kagawa, Shikoku

Located on Shikoku Island in western Japan, Kagawa is the smallest prefecture in the country. Despite its compact size, it is packed with great tourist attractions, thanks to the richness of its nature. It also owes its fame to being part of a historical Buddhist pilgrimage route. Here is a list of 12 interesting places to visit in Kagawa!

Also affectionately known as Konpira-san, Kotohira Shrine is one of the obligatory stops when it comes to Kagawa sightseeing. It was said to be on the bucket list for many during the Edo Period (1603 - 1868), and even now it is visited by over 3 million domestic and international tourists each year.

As the shrine is located halfway up Mt. Kotohira, one must climb 785 steps on a stone stairway to reach the Hondo (main shrine), and then another 583 steps to reach the Oku-no-In (inner sanctuary), for a total of 1368 steps. However, along the stairway, there are numerous souvenir shops and impressive structures which are classified as parts of Important Cultural Properties. The climb is actually quite enjoyable, and you'll reach the top before you realize it!

A breathtaking view of the town of Kagawa and the sea beyond can be enjoyed from an observatory next to the main shrine. The striking landscape makes it a perfect remedy to melt away the fatigue of the climb.

The Seto Inland Sea lies between Shikoku, where Kagawa is located, and Honshu (Japan’s main island). There are 10 bridges that connect Shikoku and Honshu, which are collectively called Seto Ohashi (Great Bridges of Seto), and those magnificent bridges can be seen from this memorial park.

As you would expect from any place called a "park," this memorial park is equipped with a play area and water fountain where children can have fun. The uniquely-shaped water fountain is modelled after the Seto Bridges. Visitors can relax and enjoy sporting activities on a vast lawn field.

Shikoku Village (Shikoku-mura) is an outdoor museum where many historic structures have been transferred from various parts of Shikoku and reconstructed. Among the structures, there are private villas, an outdoor kabuki theater, a hut where soy sauce is manufactured, and a tea shop to take a break in. This village gives visitors a sense of traveling back through time.

The villas in this village are between 150 to 400 years old. Inside the villa, old household goods such as farming equipment, furniture, and kitchenware are on exhibit. Visitors can enjoy a pleasant day out at the village, where refreshments are served at the noodle shop or the tea house. Photography is allowed anywhere on the premises as well!

At the village entrance, there is a small suspension bridge modelled after the vine bridge in Iya Valley, Tokushima. Made with wood and straw in a primitive style, the way it swings around with every step taken is not for the faint hearted. But be brave and do try to walk across it for the experience!

Marugame Castle was constructed over 400 years ago. Perched on top of Mt. Kameyama, the appearance of the castle is quite impressive despite its compact size. It is also easily accessible at only around a 10-minute walk from Marugame Station.

Marugame Castle is famous for its magnificent stone wall. Stones have been stacked four-fold from the foot of the mountain to create this wall that reaches 60m in height, making it the highest stone wall in Japan. It may look uniform at first glance, but if one observes closely, the layout of the stones vary in many places. It is through this that one can witness the true workmanship of the original builders.

Although it takes a steep climb to get to the tenshu (castle tower), the beautiful landscape that can be observed from above makes the effort worthwhile. The tenshu is made of wood, one of only 12 of its kind left in Japan. This rare historical treasure and the splendid view makes for a 2 in 1 treat after some vigorous exercise!

The oceanfront Kinrin Park is renowned as one of the most scenic spots in Kagawa. About 3,000 pine trees line up along the 1km-long footpath, and some of them are over 600 years old. The breeze through the pine trees is said to create sweet music, not unlike the sound of a kin (harp), thus the name of the park — Kinrin, or "harp woods" in English.

This bright red bridge which is reminiscent of a Shinto shrine creates a striking contrast against the sky, sea, and sandy beach. The beach is crowded during the summer, but it is quiet and peaceful during off seasons.

The view is particularly fantastic at dawn or at sunset. Relax and enjoy the colors that change almost every minute, creating quite a magical scene.

This garden was created over 400 years ago and is considered as the best traditional Japanese garden among the National Cultural Properties. It offers idyllic scenery thanks to its immaculate design and Mt. Shiun in the background, and has won three stars from a world-renowned guide of Japan in 2009.

Visitors can have boat rides in true traditional Japanese fashion, making it a unique experience. During the 30-minute journey, one can enjoy the sights of small islands only accessible by boat and many flowers of the season while listening to the stories of the guide.

Inside the garden, there are many opportunities to enjoy various refreshments, from light snacks like dango (sweet dumplings) to substantial noodle dishes such as udon. This makes for a great place to rest for visitors who are hungry after all the walking.

Honen-Ike Dam was constructed in 1930, and is a popular spot for tourists who visit to get a glimpse of its historical and dignified appearance. The spectacular 30m drop can be observed both from the top and from the bottom.

During the summer, the dam water is released periodically. Regardless of the season, the water flows every time it rains. The artificial release of the water is particularly explosive and a sight to behold. The water release is announced 1 week in advance on the official city website of Kannon-ji City, so check the site when you’re planning for a visit here.

The dam is located amidst the mountains, so the seasonal flowers add special colors to the scenery, such as cherry blossoms during the spring and hydrangea during the summer.

Kagawa is also known as the udon prefecture, thanks to its rich production of udon. There's no lack of udon joints throughout Kagawa to enjoy this delicious specialty. While you are in the realm of udon, why not make your own udon noodles? Nakano Udon Gakko offers visitors a chance to make their own udon from scratch and taste them.

With wheat flour, water, and salt as its ingredients and techniques that include stomping with your feet and vigorous stretching of the dough with a rolling pin, udon making is surprisingly strenuous. Many foreign visitors take on the challenge, and get to enjoy the fresh udon made by themselves.

Tasting noodles made with your own hands is a special experience, and the noodles can be accompanied with tempura or onigiri to make a complete meal at reasonable prices. They will even issue each participant a diploma of completion. If you’re in the area, do try it for an unforgettable experience.

Sanshu Izutsu Villa (Sanshu Izutsu-yashiki) was once a merchant’s residence from the Edo period, and is now a tourist attraction. The villa is equipped with an archive, tourist information center, souvenir shop, and cafe, making it an enjoyable stop to be included in the itinerary.

The courtyard is adorned with flowers from all four seasons. In addition to flowers and plants, there are beautiful ornamental stones and lanterns as well. The garden is carefully designed, calculated to make it picturesque from every angle.

This villa offers an opportunity to experience shaping your own wasanbon, traditional candies of Kagawa. Visitors can pour the special local sugar into wooden moulds of, among others, flowers and animals, turning them into special candies. The workshop is only 40 minutes long, and easy enough for children to participate.

Many islands of Kagawa have been turned into tourist attractions. Naoshima Island, known as “The Art Site”, is one of them, with its unique art museums. In order to preserve the island's natural landscape, most of the museum has been built underground, thus it is called "Chichu Museum", which means "underground museum".

While the museum itself is underground, certain spots have open ceilings which allows sunlight into the museum. It is one of the very few museums in Japan where the art pieces can be viewed under natural light. There are also evening programs, providing different kinds of entertainment. Many international artists and architects participate in events held at this museum.

There is a garden which is modelled after the world of Monet. It features about 200 types of plants and flowers, and visitors can get lost in this magical world of impressionism.

One of the most famous among the islands of Kagawa is Shodoshima. The Angel Road, which leads up to the island, appears and disappears depending on the tide. The road has a romantic legend — if you cross it with your lover and make a wish, it will come true.

The road can be crossed to reach the island, but only for about 3 hours during the morning and afternoons. The hours may vary widely depending on the season, so do check their official website before visiting. Witnessing the road appearing and disappearing before your very eyes makes this a truly memorable experience!

There is also an observatory called Yakusoku no Oka (Hilltop of Promises) on a nearby vantage point that looks over the Angel Road. There is a bell here that can be rung, and visitors can leave a personal memento written on a piece of wood or a sea shell. Although it’s a popular spot for marriage proposals, it’s still a fun spot to visit for anyone, not just lovers.

Another typical landscape of Shodoshima is its terrace fields, and there are over 700 of them along the slopes of its mountains. These are said to have been cultivated roughly 700 years ago, and are some of the most renowned in all of Japan, attracting many tourists every year.

These fields are green during summer, but towards autumn, the color gradually turns to yellow. The best time to visit is from May to early October, or from the planting season to the harvest season. There is a famous traditional Nakayama farmer-themed kabuki performed early October every year at Kasuga Shrine (Kasuga Jinja), which is near Nakayama Terrace.

Planting season begins in late April, where the rice fields are filled with water. The water reflects the blue sky, creating an amazing spectacle during the day. Take a pleasant stroll among the fields, and look for that perfect spot for a memorable picture!

With its beautiful nature, rich history, and various kinds of art, Kagawa’s charm knows no bounds. Once you discover it, it may even become addictive. So go ahead and visit these special attractions, discover Kagawa, and create many unforgettable memories!