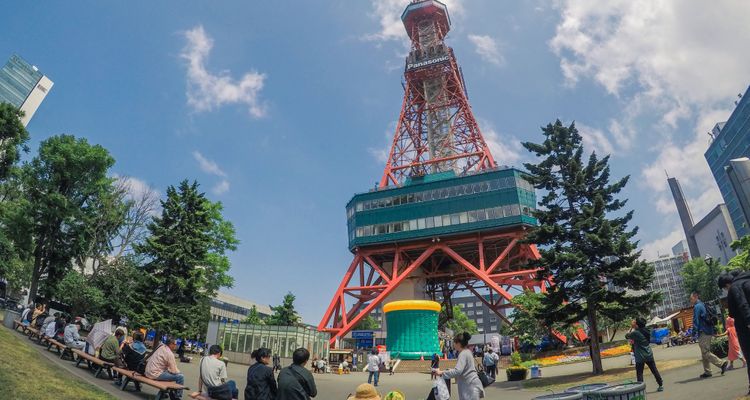 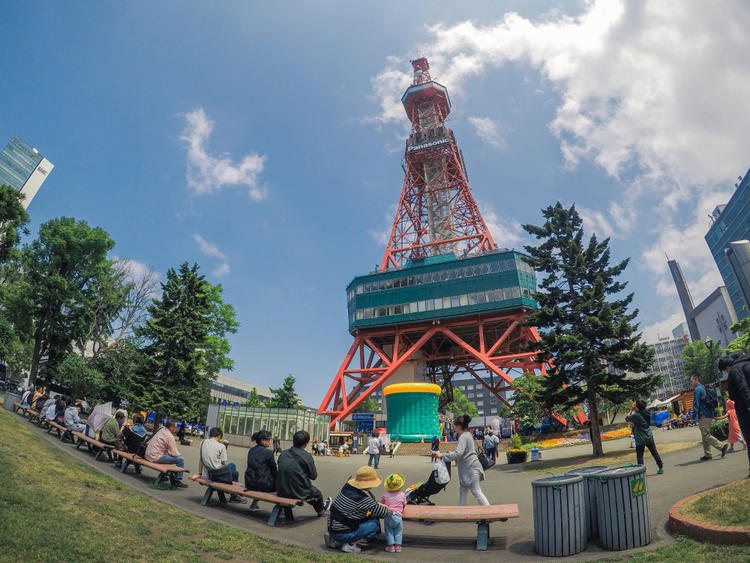 The settlement of Sapporo began in the Meiji period (1868 - 1912) through the efforts of immigrants and a group of colonists known as the Tondenhei. Today, urban development continues to progress and the city of Sapporo flourishes as one of the metropolitan hubs of the country. This will be an introduction to some of the top places you should definitely visit among the many popular sightseeing attractions in Sapporo.

The JR tower is a 160-meter tall high-rise building directly connected to Sapporo Station, which serves as the entryway to a vast amount of transportation within the city. Inside the tower, you can find a bevy of recreational facilities including a department store, a movie theater, and a hotel, and the tower regularly draws out a lively crowd of casual shoppers and tourists alike.

On the 38th floor, which is the highest floor of the tower, you can find an observatory where you can see all the way to the vast plains in the far distance from a vantage point. With a huge selection of choices catering to a variety of interests, you can definitely find numerous ways enjoy your time spent at the JR Tower, whether traveling alone or in a group.

Shiroi Koibito is a well-known confectionery brand from the Hokkaido area, and their chocolates and sweets are trademark souvenirs of the region. Shiroi Koibito Park is both an amusement park and a chocolate factory. The various attractions and buildings have candy-themed decorations, and the entire park has a fairytale-like quality like something out of a dream.

Children and adults alike can be engrossed in the fantastical atmosphere of the park. Between the rose garden and the soft-serve ice cream areas of the park, this dream is sure to be as sweet and delicious as it is visually appealing. Be sure to visit, especially if traveling as a family!

This clock tower is known as the Sapporo Clock Tower Contraption, located inside of Shiroi Koibito Park. The park's adorable denizens make an appearance every hour, greeting the guests of the park in their endearing manner that's sure to put a smile on your face.

Just a 10-minute walk south of Sapporo Station, you'll find the Sapporo TV Tower. The construction of the tower symbolizes the advent of TV broadcasting in Sapporo, which celebrated its 60th anniversary in August of 2017. The tower's longstanding history coincides with the development of Sapporo as a major city, and it is now a popular sightseeing attraction.

The tower stands 147 meters tall, and you can also find an observatory in the tower, situated 90 meters above ground. The spectacular vantage point provides a beautiful panoramic view of Sapporo's scenery, like the Sea of Japan and the Ishikari plains during the daytime, and the night views of the city after sundown. An overlooking view to take in the wintertime ambience of the white-coated cityscape is also a great setting for a romantic date.

The Sapporo Clock Tower is a now fairly antiquated structure of Western design that has overseen the progression of the city's development, carrying a history that stretches back over 130 years. At its founding, the structure was utilized as a school and was called the Sapporo Agricultural College. The building also didn't have a clock at the time, which was only installed after a number of discussions.

Today, the clock tower is a mainstay of sightseeing in Sapporo, and the various historical resources and exhibits inside provide a means to learn more about how the city of Sapporo came to be. The exterior of the building is illuminated at night, offering a different view of the structure relative to its daytime appearance.

Sapporo Dome is a major venue for spectator sports like professional baseball and soccer, as well as other various public events. Upon visiting in person, you'll have a firsthand experience of the playing field or stage that you'll frequently see on broadcasts of sports and concerts on TV in Japan. Feeling the raw, passionate energy of Hokkaido's sports fans in their home arena makes for an unbelievable experience. Perhaps you'll even find the fervor contagious and end up finding a new sport to pick up as a hobby!

Hokkaido Shrine is known as the most frequently visited shrine in Hokkaido. The enshrined deity is known for bestowing various blessings, and the grounds have a quaint, tranquil, and natural quality embodied by Japanese shrines. Aside from main shrine, there is also a subsidiary shrine dedicated to the many people whose efforts made the settlement of Hokkaido possible. Please consider trying the customary Japanese practice of paying your respects at the shrine, known as sanpai.

Sapporo Art Park is a collection of artistic works on exhibit across the 40-hectare space of the park grounds. From indoor works to outdoor exhibits, the spacious area offers a significant amount of flexibility to house works of varying scales. The surreal expanse of works that embody the diverse imaginations of the contributing artists is sure to enamor art enthusiasts and crafters alike.

While browsing around, you can stop by the posh cafe in the park, which perfectly complements the cultured mood of the aesthetic atmosphere. The park has works that both adults and children can appreciate, so be sure to consider a visit, as you're sure to find something novel and interesting.

Get up close and personal with wildlife, even in the city, with a visit to Maruyama Zoo! Located to the west side of Sapporo Station, a broad variety of animals are kept at the zoo, which is a great choice of location to visit with the family.

From behemoths native to the region like the polar bear and the Himalayan black bear, birds like owls and hawks, to adorable critters like the red panda and the squirrel monkey, you can find many active creatures in the zoo. The zoo is located at a relatively short distance from the station, making it a convenient visit en route to other sightseeing attractions on any given day.

If you enjoy drinking beer, you'll likely recognize Sapporo's well-known homegrown brand, Sapporo Beer. At the museum, you'll learn about the history of the brewery, as well as the brewing process involved in producing the different varieties of beer. Free factory tours are provided, where you also have the option to try some freshly brewed beer. If you appreciate beer, it can never hurt to know more about what goes into making it. The background knowledge will only add to your appreciation of the beer you enjoy, by learning the processes involved to produce your favorite flavors.

Odori Park, located south of Sapporo Station, stretches approximately 1.5 km from east to west. Trees and flowers are planted to either side of the footpath, blossoming in a different resplendent beauty with each coming season. The park is also active in hosting events, drawing in festive crowds with the massive beer garden and a dance festival known as the Yosakoi Soran Festival in the summer, as well as a romantic winter festival, vivified by beautiful lighting.

The park is held dear by locals and tourists all year round. The Sapporo TV Tower can be seen on the east side of the park, and the nighttime lights of the tower in conjunction with the illuminated park is popular as a date spot for couples and as a refreshing outing for families.

Although many people living in other prefectures of Japan commonly associate Sapporo with the snowy landscapes of its winter season, there are many attractions in the city that can be enjoyed year-round. Sapporo also once also served as a base of operations during the settlement of Hokkaido's wilderness, and there are many buildings that still remain as a testament to the city's history. Avid travelers should definitely want to pay a visit to the city, especially considering its proximity to nearby outlets of nature.