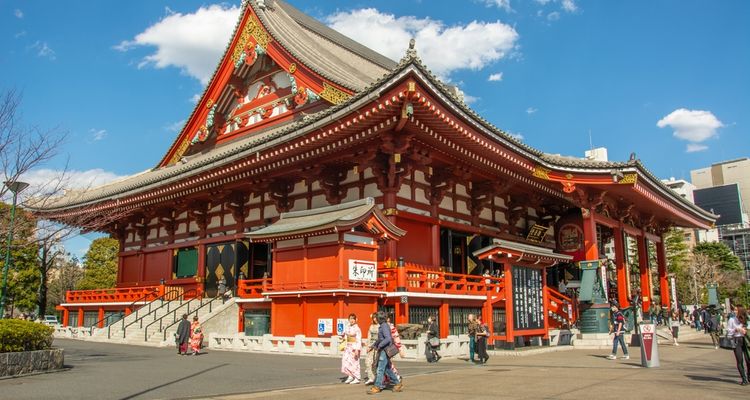 The Ultimate Travel Guide to Asakusa, Tokyo: Shopping, Events, Things to Do, and More!

Things to do, places to stay, transportation, shopping spots, seasonal events and festivals... This guide contains all the essential facts any tourist needs on Asakusa, a historical neighborhood of Tokyo whose rustic townscape helped it become one of Japan's most famous sightseeing spots. Learn more about classic tourist spots like Kappabashi Dougu Street and Nakamise Shopping Street as well as other useful tips, and by the end you'll be able to navigate the streets of Asakusa like a Japanese local!

Asakusa is a district within the Taito Ward in eastern Tokyo. Although most people believe that the neighborhood consists solely of the area around Sensoji Temple and Nakamise Shopping Street, it is actually a very large district that even includes a section of Sumida Park along the Sumida River. Asakusa is also just a stone's throw away from Ueno, another popular Tokyo destination.

Throughout the whole year, Asakusa attracts flocks of tourists seeking to bask in its traditional Japanese ambience. There are many historic landmarks in the neighborhood, as well as a plethora of delicious food, shopping spots, and exciting activities. It's an area you won't want to miss out on if you're in Tokyo!

As one of many of Tokyo's major hub stations, Asakusa Station may seem slightly difficult to navigate at first glance. Several train stations run through it, including the TOKYO SKYTREE Line (Isesaki Line), Tokyo Metro Ginza Line, and Toei Asakusa Line, and the exits for many of these lines are in drastically different locations. However, as long as you make sure to do your research and take note of key information regarding these lines beforehand, it's actually quite simple and straightforward!

If you're coming from Tokyo Station, take the JR Yamanote Line to Ueno Station or Kanda Station and transfer to the Tokyo Metro Ginza Line heading towards Asakusa for a total travel time of about 20 minutes. From JR Ueno Station (Keisei Ueno Station), it's about a 5-minute train ride.

If you're traveling from spots such as Ikebukuro, Shinagawa, Shinjuku Station, the easiest and simplest way is to first aim for JR Ueno Station, then transfer from there like above. From Shibuya Station, you can reach Asakusa on the Tokyo Metro Ginza Line in roughly 35 minutes with no transfers, so you can also use this route.

The Toei Asakusa Line is also highly recommended as it connects directly to Asakusa at places like Shimbashi Station and Nihombashi Station.

It's a good idea to get familiar with train lines ahead of time to ensure your trip goes smoothly. Check out the article below to learn more about the Toei subway lines!

From late March to early April, the Sumida Park Sakura Festival is held in a riverside park flourishing with the pretty pink colors of cherry blossoms. Many food stands line the roads, and people swarm to the area to enjoy this festive spring occasion with friends and family. There are several other events that are held during the festival as well, so there's a lot to look forward to!

The focal point of this event is Sumida Park, where you can get a good look at the Tokyo Sky Tree from across the Sumida River. It's a really popular spot to take pictures of this spectacular view!

The Sanja Matsuri, held in mid-May, is one of Tokyo's largest festivals and is even said to signal the beginning of summer. It lasts for 3 days, with a different schedule for each day. On the final day, mikoshi (portable shrines) are carried outside of the Asakusa Shrine grounds and taken around the neighborhood.

Fun fact: The mikoshi are bolstered and transported by several people. Each mikoshi weighs about 1 ton! It takes a lot of strength to lift this sacred object!

In late July, the Sumida River Fireworks Festival, one of the most famous and biggest fireworks shows in Japan, is held here. Close to 1,000,000 people attend this event every year. Several pleasure boats, in which passengers can enjoy food and drinks while gazing up at the fireworks, float along the Sumida River, painting a colorful and magical night scenery.

The areas around the fireworks festival venues become extremely congested with crowds of people so there are many rules set in place during the event, such as one-way streets for pedestrians. It's highly recommended that you look up any information about it beforehand.

In October, the Kappabashi Dougu Festival is held in Kappabashi Dougu Street, an area lined with kitchenware specialty stores. The streets are bursting with energy with many tourists attending every year. Many of the stores will offer discounts too, so it's a good idea to visit during this time if you're in the market for a special kitchen tool!

In December, the Hagoita-ichi is held around Sensoji Temple. This year-end fair has continued on annually since the Edo period (1603 - 1868). There's a great variety of hagoita (ornamental wooden paddles) sold here, from traditional versions to unique, trendy designs.

Starting from around the evening of December 31st, the area will become very crowded due to visitors coming for hatsumode (then first shrine or temple visit of the New Year). During the three days from January 1st to January 3rd, the temple will attract approximately 2,900,000 visitors. Be careful if you go around this time, as the area from Kaminarimon and Nakamise to the temple becomes so crowded, you'll barely be able to move!

If you're talking about Asakusa, the first thing many people picture is Kaminarimon ("Thunder Gate"), the outer temple gates of Sensoji Temple. The giant paper lantern hanging in the center of the gates is the symbol of Asakusa.

Step past the gates and you'll be greeted by Nakamise Street, the road leading towards the temple. It's filled with numerous souvenir shops and eateries that you can explore as you make your way towards Sensoji Temple.

If you're sightseeing in Asakusa, you should first stop by the Asakusa Culture Tourist Information Center.

In addition to a currency exchange counter and an information desk with English, Chinese, and Korean language support, there's also a sightseeing information area, so you can collect any information before you embark on your adventure.

On certain days, there are dance performances by Asakusa geisha in the multipurpose hall on the 6th floor. On the 8th floor, there's an observation deck where you can look down on Nakamise Street and get a full panoramic view of the area from up above.

Check out these articles for more information on amazing places to see in Asakusa:

In a place not far off from Nakamise Street and Sensoji Temple, you can find Asakusa Chochin Monaka, Tokyo's one and only ice cream wafer shop. The monaka (wafer) are made to resemble Kaminarimon, and there are several flavors including the popular matcha (powdered green tea). You'll definitely want to try these if you're in the area!

*It is considered bad manners to eat and walk along Nakamise Street. Please make sure to eat only in front of shops from where you bought the food or in designated eating areas.

Located in the western side of Sensoji Temple, Hoppy Street is an area with traditional Japanese-style bars where you can enjoy a a casual meal over drinks. It's also known as Nikomi-dori ("Stewed Street"), as many of the shops here specialize in stewed dishes like Motsu Nikomi, which is beef offal stewed in miso.

From around lunchtime, you can easily find seats at many places, so you'll be able to relax and enjoy delicious food and drinks.

Check out these articles for other delicious Asakusa eats:

8 Bargain Lunches You Must Try in Tokyo’s Asakusa District

10 Most Authentic Japanese Soba to Have at Asakusa

Twelve 5-dollar Lunches to Fill Your Belly at Asakusa

Nakamise Street (also known as Nakamise Shopping Street) is a path that stretches from Kaminarimon to Hozomon ("Treasure House Gate"). It's among Japan's oldest shopping streets, with close to 90 food stands and souvenir stands lining the road on both sides.

The small alleys by Nakamise Street are also filled with several eateries and souvenir shops, so you'll have lots of fun peeking into the many stores as you stroll through the streets.

Kappabashi Dougu Street is home to various shops selling kitchen gadgets and tableware. This is Japan's number one spot for kitchen-related products, from everyday plates to professional cooking tools. You'll be able to get your hands on high-quality items that can only be purchased here!

There are also shops selling realistic food samples, which make really great souvenirs, as well as food sample-making workshops, so you don't necessarily have to be a fan of cooking to have fun in this area.

Check out this article for other things to do in this area:

Asakusa has a lot of comfortable and convenient places to stay. There's a particularly wide variety of hotels, from reasonably-priced capsule hotels to Japanese-style inns that are especially popular with tourists.

Among the many hotels available in Asakusa, capsule hotels have especially been garnering attention as of late.

MyCUBE by MYSTAYS Asakusa Kuramae stands out from the rest with communal spaces such as a bar lounge, as well as spacious guest rooms that you wouldn't expect from a capsule hotel!

Want to see more hotels in the area? Check out these articles:

Handy for Sightseeing! 11 Reasonable Capsule Hotels in Asakusa and Ueno

Unique Things to Do in Asakusa

It's great to stroll around the city to take in the sights, but there are times where you're not exactly sure where you should start from, right?

Two things you'll catch sight of in Asakusa are the man-powered rickshaws and the many rickshaw drivers, who are often very tan and dressed in black pants. With a rickshaw tour, you'll be led (or more literally, pulled) around town by a guide who knows this area like the back of their own hand. You can sit back and relax while enjoying the sights and learning about the history of the area with this unique experience.

Water buses are another excellent way to see some great views! These marine vessels glide along the waters of the Sumida River that flows through Asakusa. On this cruise, you'll be able to see a side of Asakusa that you wouldn't be able to see if you were just walking around!

Asakusa is famed as one of Japan's top tourist destinations. This area has successfully maintained its historic ambience with its traditional buildings and streets. Surrounded by the bustling modern city surrounding it, it's truly a unique and exhilirating sight to see! If you're traveling in Tokyo, be sure to make a trip over to Asakusa to check it out for yourself!