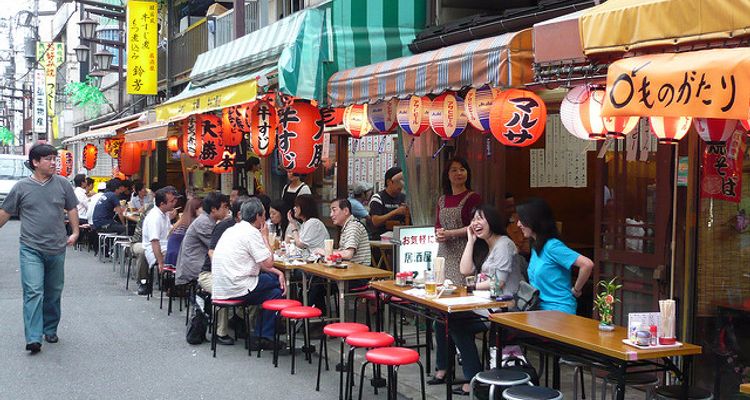 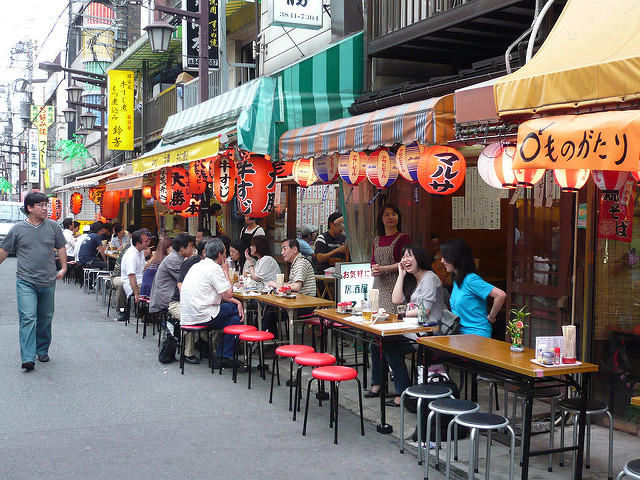 Asakusa has always been a busy part of Tokyo. Around Kaminari-mon at Senso-ji Temple (the icon of Asakusa), there are a lot of izakaya (Japanese pubs) that have been around for years. In the streets to the west of the temple (e.g. Hoppy Street (Hoppy-dori), Hatune Koji), you will see a lot of izakaya that have a working-class atmosphere, with a lot of people drinking from midday. It is also popular among tourists, as you can casually experience the working-class vibes of Asakusa.

Public Tavern Miyuki is a well-known izakaya in Hoppy Street that only has outside seating (counter seats and table seats). Their foods - such as Motsuni (innards stew), Beef Stew, Tsukune (chicken meatballs), and Nikujaga (meat and potato stew) - are all so good, and also pretty cheap! You will be able to get yourself full for just under 2,000 yen. The table seats outside make it seem almost like an open-air pub. It is a typical, busy and lively popular pub in Asakusa, where anyone can casually drop by and grab a drink. English menus are available inside the store.

Izakaya Koji (Asakusa Branch) is another izakaya located at Hoppy Street. Like Miyuki, it also has a bunch of tables outside. There are counter seats and Koagari (small separate dining rooms) inside.

The signature dish here is their beef stew. You can tell that it is good just by the look of it. The beef is slow-cooked, so it doesn’t have a strong smell. It is so soft that it feels like it melts away once it enters your mouth! Other than that, you can have other standard Asakusa dishes, such as Ham Katsu (fried ham) and Yakitori (grilled chicken skewers).

Asakusa Sho-chan is another izakaya in Hoppy Street. It is famous for its stew dishes. The signature dish is their beef stew. It looks a bit like sukiyaki, as it uses beef, onions, and tofu. The rich taste of the beef matches pretty well with beer. Another recommended dish is their daikon (white radish) stew. The daikon is well-soaked with the soup, and it has a really good flavor. It is pretty soft and easy to eat. The stew is so popular that people often ask for another bowl, as it is delicious and cheap.

Suzuyoshi is a popular izakaya where you can drink Hoppy (a non-alcoholic beer substitute that's often mixed with shochu). Hoppy has a light taste and low alcohol percentage, so it is pretty easy to drink.

The first thing you should eat here is their signature beef stew. The beef stew here is cooked Korean-style. You can tell that it’s pretty spicy just by the color of the soup. Its combination with beer is golden, but it goes really well with makgeolli (a Korean alcoholic beverage) too!

If you continue north on Hoppy Street and take a left, you will find a street called Hatune Koji. Right by the entrance is Kazu-chan no Mise. It is an izakaya, but has the looks of a typical Japanese dining restaurant. There are counter seats inside, but it’ll be better to sit at a table seat and enjoy the atmosphere of olden Japan.

They serve good drinks at a cheap cost, but close at 6:00 PM on weekdays. They open from 9:00 AM, so it is a recommended place for those who want to start drinking from the middle of the day.

Located close from Tawaramachi Station on the Tokyo Metro Ginza Line, Public Tavern Tori Tsubaki is an izakaya that opens from morning. The price of food and drinks here is pretty cheap, as you can get a medium glass of beer for just 350 yen. The signature dish is their big and thick Ham Katsu (Deep-fried Ham). You should definitely try this soft and juicy katsu!

Other than the katsu, they have meals like grilled chicken, homemade stews, and grilled chicken liver that are not only cheap, but also pretty good! Out of all their dishes, their Torinabe Meshi is exceptionally good. It is a meal of cooked chicken served on a bowl of rice. It looks just like sukiyaki, and its sweet soup is really nice.

Daimasu Sake Bar is a liquor store and sake bar at the street just right behind the icon of Asakusa, Kaminari-mon. Since it is a liquor store, they have a vast variety of sake. They regularly have more than 100 different kinds of sake. You can casually shop here, as some of their offerings are pretty cheap!

Other than sake, they also have more than 40 kinds of beer from all over Japan. Also, since it is also a bar, they serve foods that go well with drinks too! Their thick sliced grilled bacon is especially recommended. It is an unlikely yet perfect match with sake.

Asakusa might be one of Tokyo's most famous tourist areas, but some of the busy working-class parts of town from the past remain today. The izakaya in Asakusa are usually relatively cheaper than the other parts of Tokyo. Here, you can grab a quick drink and then move on with the rest of your day!