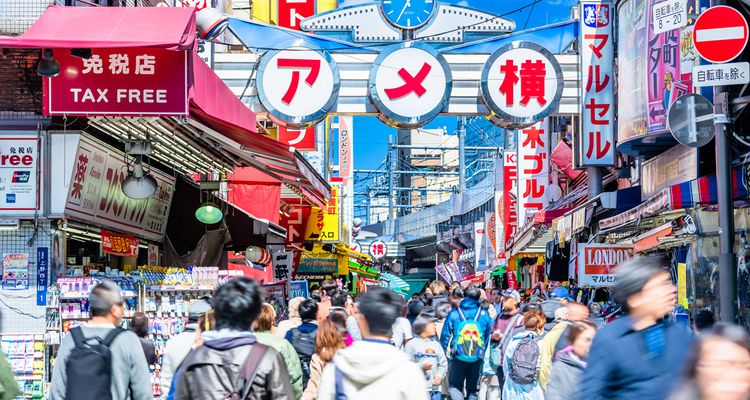 Your complete travel guide to Ueno, with things to do, local events, info on transportation, the best dining and shopping spots, and more! Ueno is one of the most popular sightseeing areas in Tokyo. Located in the center of the city, it is packed full of highlights for the typical tourist, such as Ameya Yokocho, the ultimate shopping street in Tokyo; Ueno Zoo, one of the largest zoos in Japan; and Ueno Park, a famous cherry blossom viewing spot. If you're looking for info on this amazing area of Tokyo, keep reading!

The History of Ueno

Ueno is one of Tokyo's major sightseeing spots and a leading culture and arts hub within Japan. The area largely centers around Ueno Park, which is home to numerous tourist establishments. Not only is it a center for various cultural and amusement facilities, but the park, with its luscious nature and relaxing atmosphere, is actually the first public park in Japan!

The park's establishment in 1876 allowed for exhibitions featuring innovative crafts and products which celebrated the country's modernization, and also later paved the way for the introduction of Western art within Japan. The first escalator was even installed by the park's pond, another telling sign of the area's significant stance in Japan's craftsmanship culture.

In addition to the park and the museums and zoo within its precinct, Ueno is also famed as a top sakura (cherry blossom) viewing spot. While the area was already well known for its sakura since long before, Ueno took extensive damage during World War II on many different aspects, losing much of its natural scenery and culture. The beautiful sakura that bloom annually here today are a result of the efforts of those who loved and adored Ueno with a fierce passion, working to replant 1,250 trees to restore the park to its former glory. This group has evolved to what is now known in present day as the Ueno Tourism Association.

The latter half of the 20th century saw Ueno flourishing more than ever before, developing quickly to its current state as Japan's cultural center. It became a gateway to Tokyo for many Japanese arriving from the north and northwestern regions, and many of the museums that are presently enjoyed by visitors both locally and beyond were opened during the time.

Ueno can be separated into two areas: the northern area, which is full of many cultural facilities; and the southern area, known as a great spot for shopping and dining. It is a hugely popular area with locals as well as tourists from abroad, as it is a place where you can enjoy a little bit of everything: shopping, entertainment, art, history, architecture, and sightseeing.

The northern area of Ueno, which also includes Ueno Park, is home to many facilities where you can learn about Japanese and global history and art, such as the Tokyo National Museum (1) and the Tokyo Metropolitan Art Museum (2). With just art and cultural museums, you'll have more than 10 spots to choose from, ensuring a packed and busy day full of fun. It is also where you can find the popular Ueno Zoo (3), home to around 350 different animal species, including the only living panda in the Kanto area! For more information on the many cultural facilities in Ueno, check out the Ueno Cultural Park website.

Meanwhile, the southern area is full of large department stores such as Matsuzaka Ueno (4) and  PARCO_ya Ueno (5), as well as countless eateries and shops. Ameya Yokocho Shopping Street (6), where vendors shout out to customers in a unique practice called "tatakiuri," stretches for around 500-600m along the elevated train tracks and is considered one of the most famous shopping streets in all of Japan. The area below the tracks is almost like a labyrinth, creating quite an intresting atmosphere!

*You can see the locations of all the numbered spots mentioned in this section using the Google Maps feature below:

Ueno is located in the northeastern area of Tokyo in Taito Ward, which includes other famous spots like Asakusa and Akihabara. It's one of the city's major transportation hubs, as it connects multiple different lines within Tokyo, as well as those stretching far off to the northern regions of Japan.

When making your travel plans, please note the difference between Keisei-Ueno Station and JR Ueno Station, as they are located apart from each other.

The Ueno Cherry Blossom Festival takes place every spring within Ueno Park. The Toshogu Shrine Spring Peony Festival also takes place at the same time, so it is a great time to enjoy the flowers in Ueno.

The Doll Memorial Service is held every September at Kiyomizu Kannon-do Temple in Ueno Park. Each year, people gather from all over the world to make offerings for dolls. The Tokyo National Museum also opens its gardens to public visitation every October and November.

Ueno Toshogu Shrine also holds a Winter Peony Festival each winter, in which cute straw umbrellas are constructed to protect the flowers from snowfall. Additionally, the Ukera Shinto Ritual is held every year in Ueno Park on the 3rd of Februrary to celebrate Setsubun and to wish for good health for the year ahead.

For a more detailed list of annual events in Ueno, check out this article: [2019 Edition] Complete Guide to the Major Seasonal Events in Ueno, Tokyo

This shopping street, nicknamed Ameyoko, stretches 400m - 500m along the elevated train tracks from Ueno Station to Okachimachi Station, and is filled with grocers, sweets shops, electric goods shops, restaurants, and so on. Be sure to enjoy the unique atmosphere of the Ameyoko Center Building, which is filled with many small shops selling vintage jeans, watches, and more.

This beloved park has a vast area of 530,000 sq.m. and is home to many popular sites such as Ueno Zoo, the National Museum of Western Art, and Ueno Toshogu Shrine. It is especially known as a spot to view beautiful sakura in the spring. Lesser known is its vast lotus pond (Shinobazu Pond) which blooms a pretty white and pink in late July to August. The view of this immense field of nature with the backdrop of a typical city is absolutely stunning!

Here are a couple more spots worth visiting in the Ueno area of Tokyo: 7 Unique Spots to Visit in Ueno

There are lots of delicious spots to eat along Ameya Yokocho, as well as on the other side of the train tracks and in the alleyways. One recomendation is Tarumatsu Honten, an established izakaya (Japanese pub) where you can savor Japanese sake.

Other recommendations include Izakaya Ichiriki, which was established in 1967; Izuei Honten, an unagi (Japanese eel) shop with 300 years of history; and Minatoya, a well-known, casual takoyaki shop. Ueno gives you plenty of options so that you can match your dining experience to your tastes and budget!

Looking to eat in the Ueno area? Here are a few articles to start off with:

7 Delicious Breakfast Places in Ueno to Start Off Your Day

8 Japanese Restaurants in Ueno With a Variety of Dishes

If You're Hungry For Lunch and Broke, Visit These 7 Restaurants in Ueno

When it comes to shopping in Ueno, Ameya Yokocho can't be beat. It's a great place to find deals, and there are even vendors that will haggle with you for the perfect price. Even if you don't buy anything, it's fun to just look around at the various shops! One recommended shop is Niki no Kashi, where you can buy Japanese sweets, which make perfect souvenirs.

Other than Ameyoko, you can also get your shopping fix at department stores such as PARCO_ya Ueno and Matsuzaka Ueno, both of which are perfect for small knickknacks and other items.

For more information on places to shop in Ueno, take a look at this article: 7 Interesting Shopping Spots in Exciting Ueno

There is a wide variety of lodging options to be found in the Ueno Station area, including hotels for couples, guest houses, women-only hotels, and more, so you will easily be able to find a place that matches your needs and budget.

Centurion Hotel & Spa Ueno Station is one of the most recommended hotels in the station area, and it has many stellar reviews from customers. Stay here to spend a luxurious time in the sophisticated interiors, and even sleep on a bed that looks fit for a king!

It is also outfitted with a large Japanese-style radium onsen (public bath) - the perfect place to rest your body after a day of sightseeing.

Ueno Park is also close by, so why not go for a walk and maybe even take a boat ride on Shinobazu Pond?

There are many other great lodging options as well, so take a look at these articles:

Handy for Sightseeing! 11 Reasonable Capsule Hotels in Asakusa and Ueno

The easiest and simplest way to get around Ueno is by walking around and taking in the sights. However, another quick way to see everything is by renting a bicycle! It's not only a great way to get around Ueno, but also to other parts of Tokyo, too! There are actually 4 businesses within Taito Ward where you can pick up a rental bicycle. Some even let you drop off the bike at a different location from where you rented it as long as you make a request beforehand.

On a bicycle, you can visit the popular Asakusa area, the working-class Yanaka area, the electronic goods mecca of Akihabara, and other places without having to worry about train times. Note, however, that there is a lot of traffic in the Ueno area, so you should exercise caution when biking around.

That wraps up our guide to the popular Ueno. Did you see any spots that you want to visit? If you want even more ideas of things to do in Ueno, click here. You could either spend the night in Ueno or extend your trip to visit a variety of other locations. Whichever you choose, it's bound to be a day full of excitement!