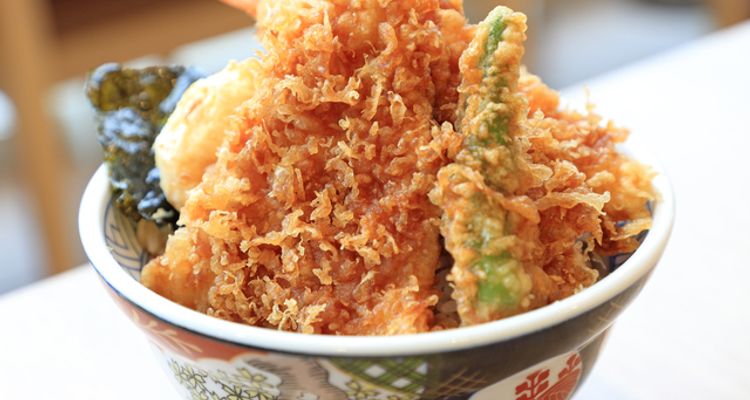 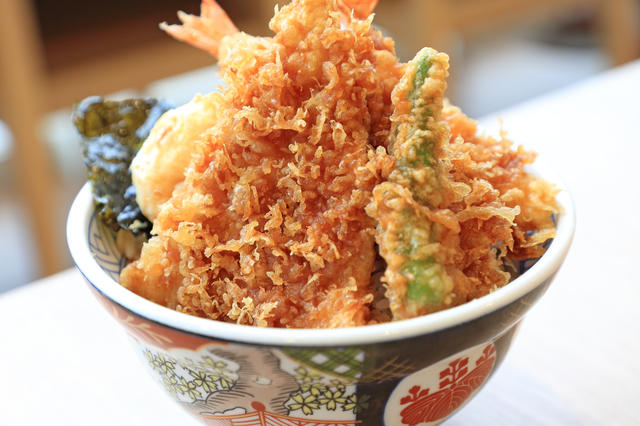 Tempura, which is made by deep frying seafood and vegetables, is a traditional Japanese dish that has been loved by the locals since the Edo period (1603 - 1868). There are still many great tempura restaurants in Asakusa, which had been the center of the working class culture of Edo (the former name of Tokyo). Here are 10 tempura restaurants in Asakusa that are particularly great for tourists!

Aoi Marushin is a tempura restaurant that is located right in the middle of Asakusa Station and Sensoji Temple, a sightseeing spot in Asakusa. Other than tempura, they also serve sushi, sashimi, and pickled vegetables. It is a great restaurant where you can enjoy multiple Japanese dishes at once.

The signature item here is the giant kakiage, which is so big, it's practically spilling out of the bowl! Kakiage is a type of tempura in which vegetables and seafood are finely cut, battered and molded into a ball-shape, then deep fried. The fish that is used for sushi and tempura at this restaurant is freshly procured every day. The fish are cooked only after an order is received, so that it is served to the customers in the crispiest and best condition.

All of the ten-don (a bowl of rice topped with tempura) here are extremely satisfying and hearty. The “Oanago Ten-don" (2,005 yen plus tax) includes a large whole piece of anago (conger eel) tempura, which has a soft texture and low in fat, making it very easy to eat. Only 30 servings of this dish are served a day, so be sure to go early if you want to try it!

Nakasei is a well-established restaurant with a long history of almost 150 years. Back in the old days, Japanese literary masters frequently visited this restaurant. Here, you can have a nice and relaxing time away from the hustle of the city while gazing at a beautiful Japanese garden.

"Raijin-age", which is named after Raijin, a god of thunder, is the signature dish at this restaurant. Deep fried in fragrant sesame oil, its rich sesame smell will fill your nose as soon as you take a bite of it. It's so delicious you're sure to become addicted.

In their course meal, you can enjoy a dish called “Tencha”, which is ten-don with Japanese tea poured over it. Having tempura with tea, instead of the strong, salty-sweet sauce, allows you to enjoy the original flavors of tempura.

Daikokuya is a restaurant famous for their thick, rich ten-don sauce, which has a deep flavor that will make you want to have it again. The salty-sweet sauce is generously poured over the tempura so it turns a dark brown color. The rice goes well with the sauce, too.

For those who don’t really like strong flavors or like to enjoy the crispiness of tempura, try the tempura teishoku (set meal). You can adjust the flavors to your own preference by having it with grated daikon (Japanese radish) and tentsuyu (thin dipping sauce for tempura) for a refreshing taste, or with some salt.

They serve great side dishes as well, like the “Nasu no Shigiyaki" (680 yen), a miso-flavored deep fried eggplant, and “Kyurimomi" (580 yen), pickled cucumber and shrimp. There are also a lot of dishes that go well with drinks.

At San-Sada, you'll be able to enjoy crispy Edo-style tempura fried with sesame oil. You can have delicious tempura and ten-don at the reasonable price of 1,000 yen, while also having the option of ordering more luxurious dishes that cost over 3,000 yen, like the "Ebi Tokujo-don”. The ingredients that are used for each dish change according to the price, so choose the one that fits your budget.

If you are not a big eater, their bentos (lunch boxes) are recommended. It is packed with small bits of a variety of different dishes, so you can try a lot of different things without getting stuffed. The presentation is beautiful, too!

For 3 consecutive years, Seikou has been noted in the Bib Gourmand, which is a title given to restaurants that serve great food for a relatively low price. Each dish here costs less than 2,000 yen. Instead of tentsuyu, the tempura here is eaten with 5 kinds of special salt so that you can really taste the original flavors of the ingredients.

While they of course place importance in the taste, they also pay attention to the presentation. Many tempura restaurants in Asakusa usually pile the tempura onto the plates when serving them, but at this restaurant, they plate the dish so that the tempura is standing up. You can enjoy the elegant taste of their lightly flavored tempura!

The restaurant is relatively small as it only contains 11 seats. The restaurant, while being very famous, has a very inconspicuous presence as the shop exterior is very simple. They are open for dinner only by reservation, where they also serve wine, so it is an ideal place for those who would like to spend a calm and relaxing time.

Akimitsu was established in 2015 among the many tempura restaurants dotted around Asakusa. In this area, it is considered a relatively new tempura restaurant. The ten-don here is known for its dynamic arrangement. The "Anago Ten-don" is very filling, with a large whole anago tempura placed on top. The anago is carefully selected before being brought in. It doesn’t have an unpleasant smell, and is definitely a must-try!

The heartiest meal of all, the “Godaime Ten-don”, has a large amount of vegetable, shrimp, and anago tempura. The tempura restaurants in Asakusa serve pretty large-sized quantities, yet very few compare to the servings here. It may be wise to share it with a group of people.

Since it is a new restaurant, they do not hesitate to introduce new unique dishes. Ten-don with frozen and cold broth, “Hiyashi Ten-don”, is one of them. These unique dishes are often offered for only a limited time, so it's fun trying out the different varieties!

Kinsen is a tempura and Japanese cuisine restaurant with a history of over 100 years. During the lunch hours on weekdays, you can have great tempura teishoku, ten-don, or kaisen-don for a reasonable price that starts from 1,000 yen.

The ten-don is made with a great care, so it doesn't taste too strong or too bland, and it's seasoned just right. The rice they use is very delicious, too. Their signature dish, “Kakiage-don" (2,200 yen), which is a bowl of rice topped with kakiage made with shrimp, squid, shellfish, and lotus roots. They also offer a small size for 1,600 yen, so it comes in handy for those who are not big eaters.

They serve other kinds of Japanese cuisine besides tempura as well. Their sashimi assortment contains high-quality seafood such as sea urchin, sea bream, and tuna. The thick-cut sashimi has a texture that melts in your mouth! They also have a lot of dishes that go very well with alcohol.

Asakusa Juroku is a soba restaurant that's very popular in the Asakusa area. The secret to their popularity is that despite the low price, their dishes are of very high quality, and the owner makes the exquisite soba herself. Soba restaurants in Japan usually serve tempura and this place is no exception. Here they serve seafood tempura such as anago and Japanese whiting fish, as well as vegetable tempura made with asparagus and angelica tree sprouts.

The freshly fried tempura is very crispy on the outside, but soft on the inside. Beautifully served on a straw mat, it has the gorgeous presentation of a high-class Japanese restaurant. Although they are deep fried, they are light and aren't very oily, and can easily be eaten together with soba.

Make sure to order the soba along with the tempura. The picture above is a dish that lets you enjoy both the rich and chewy black soba and the smooth white soba. Try them both and compare their flavors!

In Asakusa, there is a unique, gold, beer mug-shaped building. Mochizuki is a Japanese restaurant that is located on the 21st floor of this building. Though it has a very classy interior, on the weekdays during lunch, you can enjoy their ten-don at around 1,000 yen, and their tempura meals or tempura and sashimi meals for 2,000 yen.

During dinner and lunch on the weekends, you should indulge yourself in their course meals! Many fresh, seasonal ingredients are used to make their tempura, as well as their course meals. The colorfully arranged meals not only taste great, but look great as well.

With its prime location on the 21st floor, the restaurant has a spectacular view. The lights of the city at night make for a romantic ambience. Your visit here will surely be a memorable one.

"Yakatabune" is a term that refers to a type of Japanese boat where passengers can enjoy a party atmosphere. Since the Sumida River flows through Asakusa, there are multiple Yakatabune companies operating in the area, with Amisei being among one of those companies. With their course meal, which is available for groups of 2 people and up, you can have Japanese cuisine such as tempura, sushi, and miso soup. There's also all-you-can-drink sake for 2 hours!

And get this - the tempura is all-you-can-eat, too! The tempura here isn't pre-made and are all made fresh. People usually sit on the floor, but lately they have introduced boats equipped with table seats as well.

While the food is a focal point of the boat experience, you can't forgot about the view! The boat heads southward from Asakusa to Odaiba, a sightseeing spot by along bay coast, and then returns back to Asakusa. On the cruises from evening to night, you can gaze at the sunset and the beautiful night view.

Tempura was originally a food for the working class, but now tempura restaurants can range from luxurious to reasonably priced. The flavors and ingredients differ as well, and you'll see the unique features of each restaurant. Hopefully you'll be able to find your go-to tempura restaurant when you're in Asakusa!

moo423
I'm a Japanese language teacher in Tokyo. I enjoy hot springs, shrines, and food, so I often travel around the country. I write articles for a wide demographic with the hope that everyone can enjoy the sightseeing information I offer. Thank you.