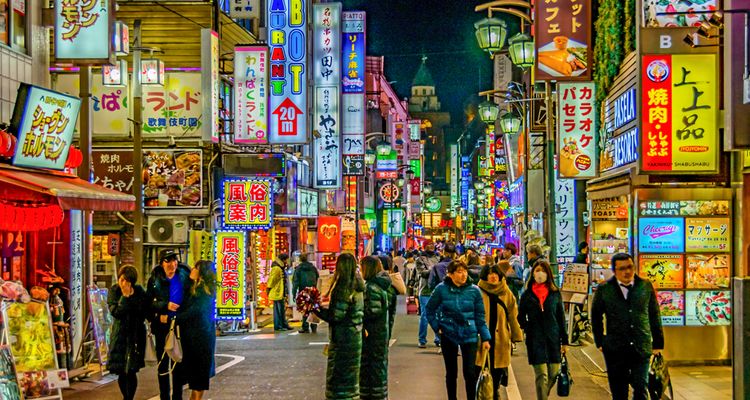 For such a happening city, it often surprises tourists how early Tokyo's public transport system shuts down. Most of the train services are done by 12:30 am while buses end for the day even earlier. If you're planning a night out on the town there always comes a time where you must decide one of three options: (1) go home on or before the last train, (2) pay for an expensive taxi later on when you want to go back home or to your hotel, or (3) stay out until the first trains start again the next morning at around 5 am. If you've gone for option 3 (whether intentionally or not!), here's a handy guide to let you know what type of late-night options you have.

If you're out on the town, there's a likely chance that late-night karaoke was the reason you missed your train in the first place. Luckily many central locations run all night long, or at least until the first train, so if you're feeling up to it, a marathon karaoke session could be in order, and when you're wiped out, you can always grab a few winks in your private booth. Major chains like Utahiroba and Manekineko run 24 hours, while most Karaoke Kan outlets run until 5 am. Many serve food and drinks, too. Note that the day of the week and the type of package you order (all-you-can-drink included, alcohol, non-alcohol, etc.), will impact the price.

A failsafe for those wanting somewhere private and compact to crash for a few hours, or at least wait until the sun comes up, manga cafes are ubiquitous in Japan, especially in major city neighborhoods like Shinjuku, Shibuya, and Ikebukuro. You can book a booth which is a small space and pay for the time you've spent there. Plenty of them will also allow you to leave and re-enter, too. Many are equipped with a computer or wifi, lockers unlimited soft drinks (there is usually a drinks dispenser in a public area), tea, coffee, and DVDs and manga (Japanese comics) to keep you entertained throughout the night.

In terms of bedding, don't expect anything too luxurious, as most manga cafe rooms feature just a reclining chair. While it's not as comfortable as a bed, you should still be able to catch a few winks. When looking for a manga cafe, note that they are sometimes also referred to as manga-kissa, internet cafes, or media cafes.

There are far worse ways to kill time than chowing down on sushi. So if you're stranded in the city and have the craving, you can always head to some of the city's popular 24-hour conveyor belt sushi restaurants.

An excellent option is Sushi Zanmai, a locally loved chain that serves tasty sushi all night long. It's a little more expensive than your regular sushi train outlets, but far cheaper than the city's more luxury choices.

The most significant benefits of Sushi Zanmai are that their outlets are located throughout the city, they're are proudly open 24 hours, and the menu is diverse. You can sample their offerings piece by piece or spend some time with a donburi - bowl of fish on rice. If you're drinking, there are plenty of booze options too.

*Note that not every Sushi Zanmai location is conveyor belt style.

For a city with plenty of late-night hangout options, it's somewhat surprising that there aren't a lot of 24 hours run izakaya (Japanese pubs) in Tokyo's central district, but if you can find one it's a very worthy option.

Isomaru Suisan, a seafood-centric restaurant chain, is one such example. With 24-hour outlets in Shibuya and Shinjuku, it's an excellent choice for those who want to grab something to eat and drink, without feeling the pressure of having to continue ordering. It's a popular place for nightlife workers and bar staff to visit after a long shift too, so even if you're wiling out the time solo, you'll never feel alone.

For the perfect pick-me-up and sober-me-up antidote to a big night out, try one of the city's popular all-night cafes. A local recommendation is Kizuku Edinburgh in Shinjuku, a great place for strong black coffee. This cozy, library-esque cafe serves freshly siphoned coffee that tastes as good as it smells. The 24-hour cafe has free wifi and a retro-ambiance that'll make you feel as close to home as you probably can feel in the middle of the city in the middle of the night. As well as late-night revelers winding down, you'll also find plenty of non-party late-night owls taking occupying the tables, making it a social but sober atmosphere. If you're a coffee connoisseur, you won't be disappointed by the selection either; the cafe has over 20 varieties of coffee that cost between 800 - 3,000 yen a pot.

More expensive than a manga cafe, but cheaper than a regular hotel, capsule hotels have become a late-night Tokyo icon. They were initially built for salarymen who missed their last train home, either from working late or going out for post-work drinks with colleagues. Today they're also a tourist attraction, and many travellers opt to crash there for a night or two to save money and for the experience of squeezing into your own little futuristic sleeping pod. You can rather easily book one for a night if you want somewhere proper to sleep for a few hours, plus have the option of a nice, refreshing shower.

Many capsule hotels are separated by gender and feature communal facilities like bathrooms, and occasionally kitchens and even working spaces. Like any accommodation, there are a variety of capsule hotel options, from the more luxurious like Millenials in Shibuya to super cheap, older style choices. Prices vary widely according to the hotel, but you can expect between 2,000 yen to 5,000 yen per night for a standard option. Read about some of our most highly recommended Shibuya capsule hotels here.

Love Hotels are technically hotels, but more often than not, the primary purpose of these garishly designed complexes isn't to sleep. They're popular intimacy options for those who for one reason or another can't host their special companion. Luckily they're also flexible rental spaces too, so if you've got a plus one and you're both looking for somewhere indoors to spend some time or even sleep, you can book a love hotel any time of day any night of the week. Solo visitors are also welcome in most places too. Most hotels offer different rental options, "rest" (休憩) options that last about 2-3 hours, and "stay" (宿泊) which is for overnight. Like any regular hotel, prices vary greatly, but at the lower end of things you're looking at around 3,000 yen for a 'rest.' Here are some of Toyko's most price-friendly choices.

For some late-night rest, relaxation and respite, there's always the option of visiting a public bath.  Not all are open 24 hours, but 24-hour bath Thermae-yu, in Shinjuku is a great choice, it's central, and the facilities are incredibly extensive.

Running 24 hours, Thermae-yu has not just pristine baths, but also an onsite restaurant, bedrock bath, lounge, smoothie bar, and bar (the latter of the two close a little earlier though). Tattoos are often a concern for foreign guests, but Thermae-yu just announced that they'd be allowing female guests with tattoos to use the baths, so you needn't worry about offending anyone if you are flaunting some ink.

Thanks to Tokyo's ever-expanding array of 24-hour establishments, you'll always find somewhere to recover and wait out the long Tokyo nights, whether that's at a karaoke booth, manga cafe, or tucked snugly into the narrow bed of a capsule hotel.