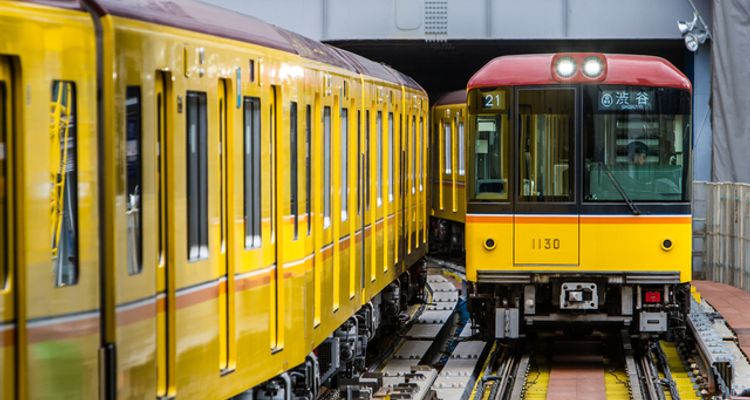 Stylish And Functional! Everything You Need to Know About the Century-Old Ginza Line

If your visit to Tokyo includes the shops in Ginza, the museums of Ueno Park, Sensoji Temple in Asakusa, or the famous intersection in Shibuya, the convenient Ginza Line will take you there. According to a train-centric survey, locals consider the line to be Tokyo's best subway line, which is high praise considering Japan's stringent standards for trains. What makes the Ginza Line the best? Read on to find out!

Ginza Line - One of the Most Popular Tokyo Train Lines

A survey from the "Transit News" website* asked respondents which of Tokyo's 13 subway lines they used frequently, and which lines seemed the most convenient. The results were a ringing endorsement for the Ginza Line, which topped both survey questions: 40.3% of respondents said they use the line frequently, and 40.8% consider it to be particularly convenient. Only the Marunouchi Line came within 10 points of either score.

Why these high marks? Respondents gave a variety of responses - let's go through them one by one.

(Note: the Yamanote Line - Tokyo's other iconic railway line - does not run underground and was not included in this poll.)

1. The First Subway Line in the East

The first segment of the Ginza Line opened in 1927 and was the second underground to open outside of Europe or North America. (The first was - and here's a piece of trivia none of you are expecting - Buenos Aires.)

As you would expect, this pioneering subway line was constructed through the most central and popular parts of the city, which at the time was the Shitamachi area around Ueno and Asakusa, extending south to the major commercial areas of Nihombashi and Ginza. These areas might have fewer department stores than they used to, but they are still enormously popular today.

So when respondents note how the Ginza Line conveniently goes to all the right places, that was intentional. The other, later lines were designed to cater to commuters and were each designed to fulfill a specific role within a broader network. The Ginza Line, however, was literally meant to connect the busiest parts of Tokyo.

Here's another advantage to being first: early lines are dug just below street level, while later lines have to be dug deeper and deeper underground to avoid the existing lines. The stations of the Ginza Line are only 9 meters deep on average, which is three stories at most. Compare that to the latest Tokyo Metro, the Fukutoshin Line, whose stations are 27 meters deep!

For those new lines, getting from ground level to the fare gates and then the platform means navigating a series of stairs, elevators, or interminable escalators, which can be a pain if you're pushing luggage or a stroller or for those with disabilities. The Ginza Line's stations, by contrast, are much easier to get around!

Another point in favor of the Ginza Line is its frequency: during the morning rush hour, it runs some 30 trains in one hour (one every 2 minutes), edged out only by the Marunouchi Line. This frequency allows it to be only moderately crowded during rush hours (less crowded than more than half of Tokyo's lines), and it's not particularly prone to delays either.

One possible reason? The Ginza and Marunouchi Lines don't offer direct service to commuter lines in the way that many subway lines do. This is inconvenient in some ways, but it means that they are not affected by any delays that occur on the connected lines.

The Ginza Line's convenient route means that many a tourist comes across it during their travels. Wanting to make the best impression of Tokyo for them, Tokyo Metro has leaned into making the line a pleasurable experience aesthetically.

So, the last time that Tokyo Metro ordered new trainsets for the Ginza Line in 2017, it went back to the basics. The "1000 Series Special Design" cars were introduced on the Line's 90th anniversary and are designed to look like the original 1000 Series, which ran on the Ginza Line from its inception in 1927 for about forty years. Its warm, wood-oriented interior color scheme, elegant green seats, lights that resemble old-fashioned lamps, and the single headlight leading the way truly makes a convincing old-fashioned atmosphere.

For now, only two of the Line's 40 trainsets are designed in this way, so cross your fingers and hope you come across it!

5. And the Newest Stations

Accompanying the Ginza Line's new, beautiful train cars are its new, beautiful stations. Five of the line's stations (Nihombashi, Kyobashi, Ginza, Aoyama-itchome, and Gaiemmae) completed a redesign process in 2020. These elegant designs were created under the motif of "combining tradition and the cutting edge." Ginza Station now features images from the shopping district's storied past on the platform walls, while Kyobashi Station leant into a historical theme, with various artifacts being displayed by the faregates.

And of course, there is the stunning modern Shibuya Station platforms, which opened in January 2020. The minimalist design and distinctive sweeping geometry truly befits Shibuya, probably the most recognizably youthful and future-oriented neighborhood in all of Japan.

Due to its convenience and customer-friendliness, it is clear why the Ginza Line is rated so highly amongst train fans. Considering its reach to numerous famous sightseeing spots, you are likely to get the chance to ride the line whenever you are traveling around Tokyo. Hopefully, you will agree with all the points mentioned by the Ginza Line fans and the Ginza Line will become one of your favorite Japanese train lines as well!

*The poll was between April 23-26, 2021; there were 907 respondents, divided between those from Tokyo and those outside it.