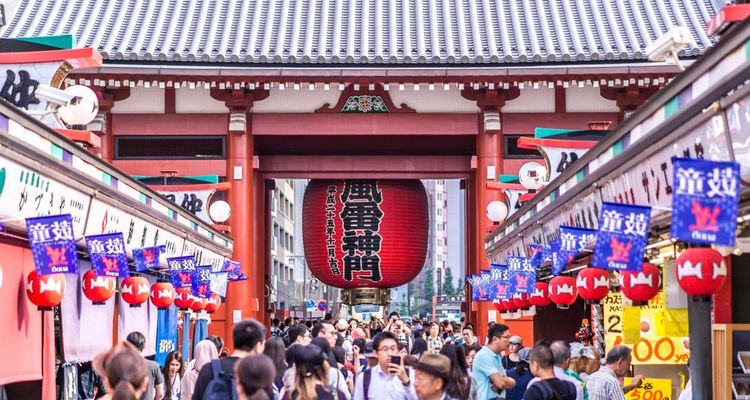 With its ancient shrines, breathtaking nature, and futuristic city skylines, Japan is undoubtedly a photogenic country. That being said, capturing amazing travel photos while here isn’t always as easy as simply pointing the camera and pressing the shutter button. Here are four tips you’ll need to know when photographing your vacation in Japan.

Generally speaking, photography is incredibly common and widely accepted at most locations throughout Japan. As the home of some of the most famous camera companies in the world, photography is very much a part of Japanese culture. However, there are certain instances where visitors are asked to put their cameras away.

Though Japan isn’t considered an overtly religious country, shrines and temples are still treated with the utmost respect. Because of this, taking pictures in these areas is occasionally prohibited. While shooting outside on the grounds typically isn’t an issue, once inside the actual temple, visitors are generally asked not to take photographs. Shrines are often less strict about this, but pay close attention to any signs posted nearby. Even if you are unable to read Japanese, they will often have easily recognizable symbols for international tourists, such as a camera with an X through it.

Retail stores present another common situation where visitors may be asked not to take photos. While you may be excited to share pictures of some of the cute Japanese products you’ve found with friends back home, certain stores may view it as a threat to their intellectual property. While many stores have embraced the free marketing, always check for signs indicating whether or not photos are allowed on the premises before whipping out your camera.

When it comes to photography gear, two pieces of equipment which are often found amongst vacation-goers are selfie sticks and tripods. From capturing a special memory in front of a famous landmark to photographing dimly-lit indoor scenes, both serve important functions in creating beautiful travel photos.

Unfortunately, being able to use a selfie stick or a tripod is not always an option. In many popular tourist locations, you will find that they are prohibited due to the potential danger they pose. In a crowded area, a sudden turn could lead to a selfie stick to the face, or a carelessly placed tripod could send someone sprawling. This is especially true in small, tightly confined indoor spaces such as temples.

Instead, make use of what you have around you. Want to take a sharp photo without a tripod? Rest the camera on a solid surface (where appropriate) to keep it steady. Want a photo of yourself in front of the Tokyo Skytree? Ask a passerby to take a photo of you instead of trying to do it alone. If neither of those options are possible, forget the camera and take the opportunity to create a special, lasting memory that is just for you.

When considering the most eye-catching photos of Japan, such as the ones that made you want to visit in the first place, the location is only part of what makes it stand out. Less obvious factors like the amount of people in the photo, wet roads after a rainstorm, or even the position of the sun in the sky can drastically change not only the appearance of a picture, but the emotion it’s capable of invoking as well. As a freelance photographer in Tokyo, I’ve experienced firsthand how finding the best time to take a photo can take your picture from ordinary snapshot to a stunning masterpiece to wow your family and friends back home.

Of course there are too many great photo spots in Japan to ever list them all, but here are a few of my favorites around Tokyo and the best time to photograph them.

Often called the busiest intersection in the world, the intersection near Tokyo’s Shibuya Station is frequently shown in movies and TV shows to highlight the city’s non-stop pace. However, it does occasionally stop. Tokyo is a city that tends to get started later in the day. If you come to Shibuya in the early afternoon, it tends to be an almost unrecognizable ghost town in comparison to how it’s typically depicted. To capture that high-speed, energetic vibe, wait until just before sundown and later when the crowds are at their peak. If you're not so keen to take part in the organized chaos, check out the nearby Starbucks or observation deck in the Magnet by Shibuya 109 building for a bird's eye view.

Perhaps one of the most iconic Tokyo photos, Kabukicho in Shinjuku is a sea of glittering neon lights and frenetic motion. Looming over the nearby movie theater at the end of the road, none other than the legendary Godzilla himself overlooks the scene. Kabukicho is so iconic in fact that if you search for “Tokyo” online, you’re almost guaranteed to find a photo of this street within the first ten image results. This area has nowhere near the same futuristic feeling during the daylight hours, so it’s best to come back an hour or two after the sun has set. To capture that immediately recognizable Tokyo scene, stand across the street so that you are looking at the Kabukicho archway.

As Tokyo’s oldest temple, Senso-ji in Asakusa is one of the areas most commonly visited by tourists and locals alike. Unlike the Shibuya Scramble and Kabukicho above, photographing this spot when it’s not crowded invokes a feeling of peace and serenity that one would expect to find at a temple. If you’re feeling motivated, try to get here just after sunrise when most would-be visitors are still sleeping. You’ll be able to capture unobstructed views of the entire area and your photos will benefit from the soft morning light. The most oft depicted sight in Senso-ji is the large red lantern that hangs under the entrance gate. If you take a photo at the right angle, you can also capture the famous red pagoda in the same shot.

The name itself may not sound all that exciting, but the Tokyo Metropolitan Government Building is home to one of the best free lookout points in the city. From either of its two observatory decks (pictured above), visitors can enjoy sweeping panoramic views of Tokyo and beyond. On clear days, you can even spot Mount Fuji in the distance. If the weather cooperates, the view is incredible throughout the day, but is truly spectacular about one hour before sundown. This window of time; known by photographers as “golden hour”, creates a soft, reddish-gold light that truly makes the city come to life.

4. When in Doubt, Ask Permission

When out exploring certain Tokyo neighborhoods such as Akihabara, Ikebukuro, or Harajuku, it’s not uncommon to come across people wearing amazing, highly-detailed cosplay (character costumes) or other unique and outlandish outfits. While the time and dedication they have put into their costume certainly warrants attention and praise, it doesn’t necessarily invite people to take their photo without consent.

While in my experience, people in Japan are more or less open to having their photo taken, it’s important to remember that anyone you intend to photograph; be it a cosplayer, sales clerk, maid cafe worker, etc, are all people and are entitled to their privacy. Before taking anyone’s photo, it’s always best to ask their permission. To ask in Japanese, the phrase 写真を撮ってもいいですか (shashin wo totte mo ii desu ka) translates to “May I take a photo?” When in doubt, the universal signal of simply pointing to your camera while smiling and nodding will typically do the trick as well.

It’s hard to go wrong with taking travel photos in Japan. With something new to see around every corner, inspiration can be found wherever you look. By following the tips listed above, you’ll be guaranteed to head home with many scrapbook-worthy shots.