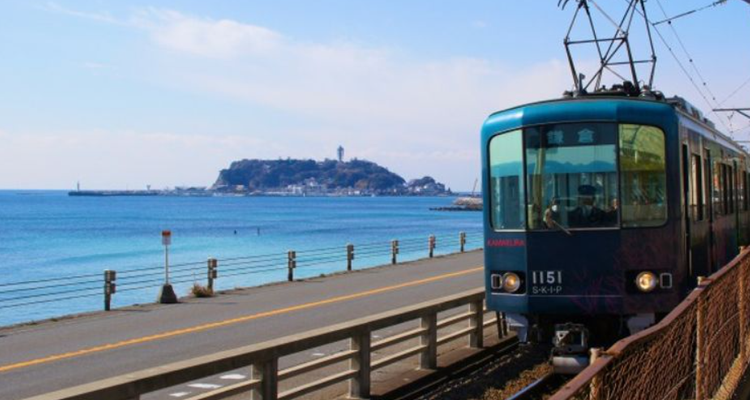 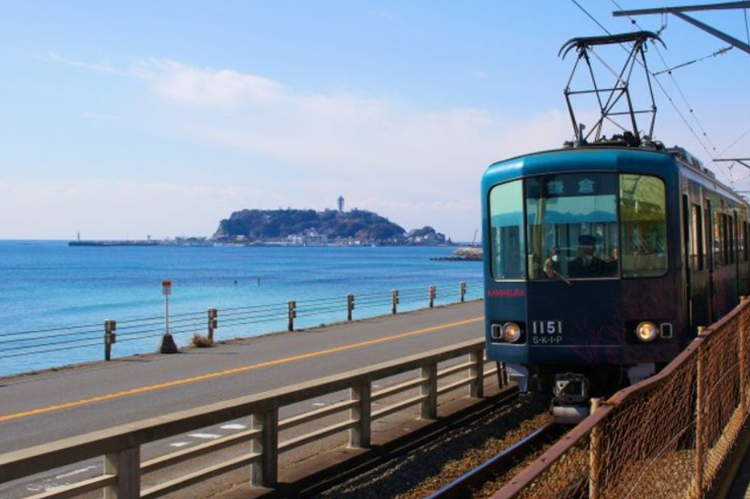 A Complete Guide to Kamakura and Enoshima with the Enoden

Kanagawa Prefecture is a tourist destination famous for its beautiful coasts and historic buildings. Two particularly well-known regions in this prefecture are Kamakura, home to many cultural relics, and Enoshima, an island that offers breathtaking scenery. One of the best ways to tour these seaside places is through the Enoshima Electric Railway, or "Enoden" for short. Here's a guide all about this handy railway line, complete with the best spots to visit near each train station!

The Enoshima Electric Railway (Enoshima Dentetsu) runs for 10km from Kanagawa's Kamakura Station to Fujisawa Station, with 13 stations in between. Abbreviated to "Enoden", it has gained popularity amongst train aficionados and tourists alike for its retro carriages and beautiful views as it runs along the seaside. Depending on the season, you might even see hydrangea fields from your seat!

Three of the stations - Kamakura Station, Enoshima Station and Fujisawa Station - have a gift shop selling Enoden goods. Cups and handkerchiefs with the Enoden motif might make a nice souvenir, no?

The Noriorikun is a pass that gives you unlimited access to the Enoden for a whole day. You can get on and off at any station on the Enoden line as long as you have this pass! You can purchase it from any of the Enoden stations. It also entitles you to some bonuses at select stores, restaurants, and hotels near the various stations, so don't miss out!

Not only does this ticket give you unlimited rides on the Enoden from any Enoden station, it also lets you into some of the attractions on Enoshima Island! It's sold at Fujisawa Station, Enoshima Station, and Kamakura Station after 1 PM. Highly recommended if you plan on visiting the island, as it is much cheaper than buying each ticket individually. And again, this also gets you special bonuses with select cafes and stores around the island.

The set includes entrance to:

The Highlights from Kamakura to Enoshima: Places Near Kamakura Station

The biggest station on the Enoden line is Kamakura Station. Inside, you will find all sorts of stores selling souviners and ekiben (lunch boxes for train rides). Many tourists pass through here as it is surrounded by many historic buildings and has 2 lines running through it: the JR Yokosuka line and the Enoshima Dentetsu line. Use the West Exit to get to the Enoden line.

Built in 1063. Many samurai fans from all around the world come to visit it, as it is believed to enshrine a deity that protects samurai (warriors that acted on the behalf of the government back in the Kamakura era (1185 - 1333)).

There are plenty of shops on Komachi Dori that sell various Kamakura souvenirs and antiques.

The Highlights from Kamakura to Enoshima: Places Near Wadazuka Station

Wadazuka Station is the next station down from Kamakura Station. It's a small station with a ramp for wheelchair access.

Kamakura Seaside Park faces the popular beaches Yuigahama and Inamuragasaki. You can even see Enoshima and the seaside from the lighthouse in the park!

The Highlights from Kamakura to Enoshima: Places Near Yuigahama Station

Yuigahama Station is a popular station in the summer since it's so close to Yuigahama Beach. Other highlights nearby include shrines and a museum of literature.

This museum displays a large collection of original manuscripts and equipment from 300 Japanese writers with some connection to Kamakura. The rose garden on the premises is quite beautiful in the summer and autumn.

Yuigahama Dori is a street that lies between Wadazuka Station and Yuigahama Station, and it is filled with cafes and souvenir shops.

One of these shops is called "Taiyaki Namihei", and they make taiyaki to order, one at a time. Taiyaki is a sweet pastry filled with red bean paste, baked until it becomes nice and crispy.

The Highlights from Kamakura to Enoshima: Places Near Hase Station

Hase Station is surrounded by many historic Buddhist temples, and is particularly famous for being the closest station to Kotoku-in, home to the Great Buddha of Kamakura. Since it is a popular tourist destination, you will also find plenty of souvenir shops and restaurants in the area.

Kotoku-in is a temple that was built around 800 years ago, along with the 11m tall Amida Nyorai statue that acts as its symbol. It has since become a national treasure and attracts tourists and worshippers from all over the world. You can even enter the Buddha statue!

Opened in 736, Hasedera has one of Japan's largest Buddha statues, the 9m-tall Eleven-headed Kannon which is carved from wood. At the start of summer, around 40 types of flowers, totalling around 2500 bushes - such as French hydrangeas and rhododendrons - decorate the premises, turning it into a flower wonderland.

The Highlights from Kamakura to Enoshima: Places Near Gokurakuji Station

Like its namesake suggests, this is the closest station to Gokuraku-ji Temple. This area is also often used to film Japanese TV dramas, making it yet another popular tourist destination.

Built in 1259, Gokuraku-ji Temple is also famous for its hydrangea gardens, just like Hasedera.

*Photography is prohibited within the premises.

Jojuin is a temple that has many Buddha statues on its premises and is known for exuding a massive amount of spiritual power amongst tourists.

The Highlights from Kamakura to Enoshima: Places Near Imamuragasaki Station

Imamuragasaki Station is a great place for walks or outings, as it is close to beaches and hot springs. There may be no one working at the train station, but it has a newly installed wooden roof which makes for a gorgeous train platform.

This park has been listed in many different rankings, such as Kanazawa's Top 50 Sceneries and Top 100 Places in Kanto for Viewing Mt. Fuji, for its extraordinary scenery. Enoshima and even Mt. Fuji is visible from here on a clear day.

Imamuragasaki Onsen is the only natural hot spring in Kamakura. Only people 18 and over are allowed to use the facilities here, so adults, take this opportunity to relax and let the water work its magic on your skin!

The Highlights from Kamakura to Enoshima: Places Near Shichirigahama Station

Home to one of the top beaches in Japan, Shichirigahama Station is a great place for ocean views, trendy stores, and cafes and restaurants by the seaside.

A popular photo spot at dawn and dusk, this beach is also well known to surfers both in Japan and around the world.

Pacific Drive-in is a Hawaiian cafe near Shichirigahama Beach that is popular for its lunch and pancake menus.

The Highlights from Kamakura to Enoshima: Places Near Kamakurakokomae Station

In 1997, this station was selected as one of the top stations in Kanto, largely due to the amazing view of the ocean from its platform.

This slope just outside Kamakurakokomae Station is the perfect spot to take photos of both the ocean and the Enoden! It has also become a famous tourist spot ever since the railway crossing at the bottom of the slope appeared on the hit manga Slam Dunk.

The Highlights from Kamakura to Enoshima: Places Near Koshigoe Station

Koshigoe Station is the train station right before Enoshima Station. It's a great place to get a sweeping view of Enoshima island, not to mention all the excellent seafood cuisine you can try thanks to the fishing port nearby!

This fishing port faces Enoshima Island and supplies restaurants around the port area and Enoshima with fresh whitebait. Try the seafood dishes there, such as the seafood bowl, to get a taste of this Koshigoe Port specialty!

Manpuku-ji Temple was built in 1245 and has rare wooden Buddha statues enshrined within.

The Highlights from Kamakura to Enoshima: Places Near Enoshima Station

On this island, there is Enoshima Shrine, a favored place to pray for things related to love and marriage, as well as the lighthouse Enoshima Sea Candle. Don't forget to try all the fresh seafood and other foods offered at the stores on the way to the shrine!

One of the big highlights of this aquarium is the giant tank that displays the fish of Sagami Bay. Amongst all the different fish from the sea around Enoshima, the 8,000 or so Japanese pilchards move as though they were one living creature. Of course, there are plenty of other exhibits and a dolphin show, too!

Did any of these attractions peak your interest? There are, of course, plenty of other interesting spots around Kamakura and Enoshima, so if you ever feel like adventuring a little, why not travel around on the Enoden?