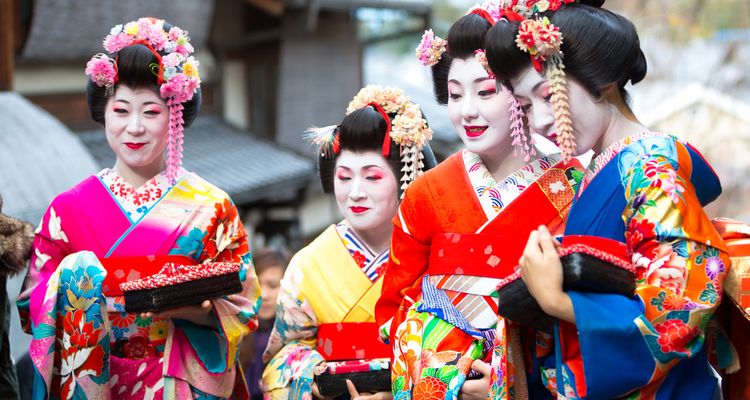 If you're familiar with Japanese culture, I bet that you've heard the term "geisha." But do you really know what it actually means? Here are 12 facts about geisha that you probably didn't know!

They all have the same character - gei (芸), which means entertainment, or something that requires a certain skill, esprit and idea. Sha (者) means person or thing. Ko (子) means child. Gi (妓) means a woman who serves at a banquet with traditional Japanese music or singing. All the terms mean a woman who entertains guests with dance, Japanese traditional music and singing at a banquet.

During the Edo period in Kyoto and Osaka, geisha meant a houkan (幇間), and geiko meant a woman. Houkan (幇間) was a job to entertain the guests by showing their talent and helping the geiko and maiko (舞妓). By the Meiji era, the word geisha became a woman's word.

3. There are names for ones who are still in training for to become geisha.

They are called maiko (舞妓). Maiko provide entertainment such as Japanese traditional dance, ohayashi (祭囃子) at a banquet, and are in training to become a geisha. Ohayashi is a form of Japanese music performed during festivals, and shows diversity in regions throughout Japan.

4. You can tell a geisha and a maiko apart by their hairstyle.

5. You can tell a geisha and a maiko apart by their kimono.

Geisha wear tsumesode (詰袖) kimono. Tsumesode kimono are kimono which lack an opening on the side under the armpit.
Maiko wear hikizuri (引きずり) kimono. Hikizuri are similar to furisode, or formal kimono that women wear on Seijin-no-hi (Coming of Age Day), in that they both have long sleeves. But hikizuri have very long, padded hems that trail along the floor, whereas furisode are a regular length.

Oshiroi (白粉) is a white powder. They use it to cover the faces and the front and back of their necks. In the old times, this contained lead, which caused serious health problems later on. They complete the look with black eyeliner, a flick of red eye shadow at the end of their eyelids, and very red lips. Usually when a geiko gets older, she will stop wearing oshiroi.

7. In the old times, geisha had black teeth.

This custom was called ohaguro (お歯黒). It was not only for geisha, but for women in general. The meaning of it changes through the era, but it was for beauty. Nowadays, maiko will blacken their teeth when they reach the sakkou stage, or when they graduate from being a maiko.

Okiya (置屋) is where geisha are. Guests would call or name a geisha through Okiya. You can't see or choose a geisha face to face. To see a geisha, you have to know someone who has connections to the Okiya.

9. Having a geisha at your banquet requires connections.

To call a geisha to your banquet, you have to tell the Ryotei (料亭) where you're having it. A Ryotei is a high-class Japanese restaurant furnished with large private rooms. The Ryotei will then arrange the number of geisha according to the budget and the guest's wishes. If you're a familiar face, you can directly call a geisha. You can't always call a geisha to every Ryotei. There are strict rules.

They are called either ohanadai (お花代), gyokudai (玉代), or senkoudai (線香代) . Dai (代) means price. Ohana means flower. Gyoku means a sphere or a jewel. Senkou means incense. To name something indirectly using other words is a form of beauty in the Japanese language, as it is for many other cultures.

A danna (旦那) is a powerful, wealthy man that pays for all the expenses of the geisha. To become a geisha requires a lot of time and money. The danna would pay and take care of the geisha throughout her life. Therefore, it was high social status to become a danna. It showed that they had enough money to be a patron of a geisha. Their relationship was not inherently sexual.

12. GEISHA ARE NOT SEX WORKERS.

Many people confuse geisha with oiran - shown in the image above - who were high-class sex workers. It is true that some geisha did sex work, but technically they were entertainers.