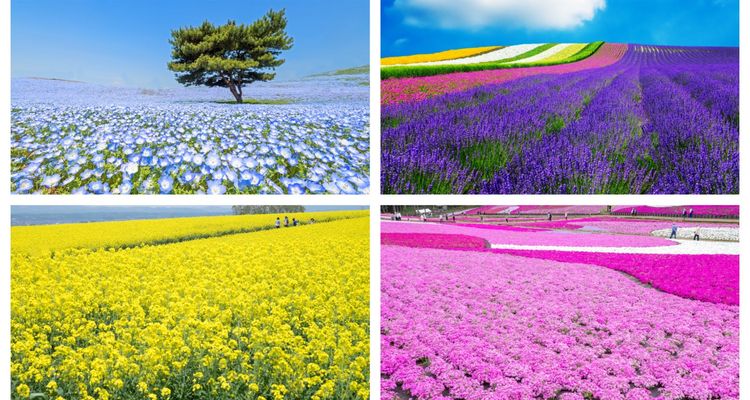 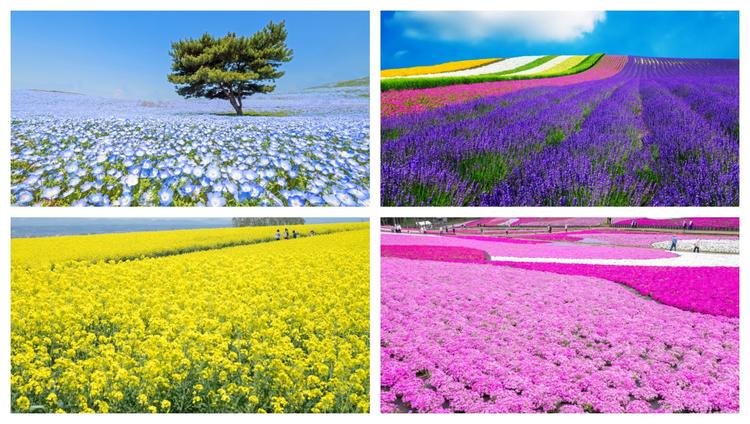 In Japan, thanks to its four distinct seasons, you can enjoy a wide variety of flowers that change with the seasons. In each part of Japan, you can find many beautiful flower gardens, which are popular with both the locals and tourists. Here, we are going to introduce you to 16 of our favorite flower gardens. A 20-minute walk from JR Nakafurano Station. From the end of June to early August, the lavender garden here is transformed into a spectacular sea of purple. Depending on the time of year, you can also enjoy a wide variety of seasonal flowers, such as lupins, poppies, sunflowers, marigolds, salvias and cosmos. In addition, here you can enjoy picking your own lavender for 700 yen per bag.

With a size of 23.13 hectares and around 1.5 millions sunflowers, this is one of Japan’s largest sunflower gardens. The beautiful sight of the sunflowers in full bloom from early to mid-August looks as though it has been taken straight of a painting. During this period, you can enjoy the sunflower maze or lazily wonder around the beautiful garden on one of the rental bicycles on offer. Entry into the garden is free. At 143 hectares, Yokohama-cho in Aomori Prefecture has the largest planted area of rape blossom (nanohana in Japanese) in the whole of Japan. During the full bloom, the whole town is transformed into a beautiful sea of yellow. The best time to visit is from early to mid-May. Every year during the period of the full bloom, the Nanohana Festival is held here, with attractions such as a rape blossom maze and the Nanohana Marathon attracting visitors from all over Japan. Entry for junior high school students and above is 100 yen. Higashizawa Bara Koen is a 7 hectare garden with 700 varieties of rose from around the world (rose in bara in Japanese). At this rose garden, which was chosen as one of the top 100 aromatic landscapes in Japan, you can enjoy both the beauty and scent of more than 20,000 roses. You can also see the “Murayama” rose, an original rose named after the town in which the garden lies. The best time to visit the garden is from early-June to late-September. Entry to the garden is free, except during the Bara Matsuri, or Rose Festival, where it costs 600 yen for adults and 300 yen for elementary school and junior high school students. At the Hitachi Seaside Park, you can enjoy a variety of flowers throughout the year. From April to May, more than 4.5 million nemophila bloom on a 3.5 hectare hill in the park, creating a beautiful contrast with the blue sky. This is a spectacular sight that we really recommend you see. Entrance into the park is 410 yen for adults and 80 yen for elementary school and junior high school students. Hitsujiyama Park has a hill from which you can see the whole of Chichibu City. The creeping phlox hill, known as “Shibazakura no oka” in Japanese, is particulary popular. From mid-April until early-May, about 400,000 creeping phlox flowers bloom in a colorful design. The blossoming of the 1,000 or so cherry trees in the park in spring is a spectacular sight. Entry into the park during the time of blooming is 300 yen for adults and free for junior high school students and under. Cosmos flowers are known for their long time they are in bloom, and at the Kurohime Kogen Highlands Cosmos Park, you can enjoy the one million or so cosmos flowers from early-September to early-October. As well as cosmos flowers, you can also enjoy hydrangea, dahlia and creeping phlox throughout the year. The park also operates a panorama lift that seats 4 people, so you can enjoy the view of the whole park from above. Throughout the year, countless tourists come to visit the Sakura Furusato Hiroba to enjoy a variety of flowers against the background of a Dutch windmill, with around 600,000 tulips in April, 20,000 sunflowers in July, and about 500,000 cosmos flowers in September. Events are held in time with the blooming of the flowers and you can also enjoy picking flowers. The entry into the garden is free. The park is about 30 minutes on foot from Keisei Usui Station. A bus for the park also departs from Keisei Sakura Station North Exit. In the vast grounds of the Showa Memorial Park, more than 1,500 cherry trees, including 200 or so Somei Yoshina cherry trees, 220,000 tulips of 13 varieties, 1.8 million shirley poppies, 300,000 Iceland poppies, and dainty blue nemophila flowers blossom in the spring. In the summer, you can also enjoy sunflowers, and in autumn, cosmos flowers and maple trees. Entrance to the park is 410 yen for adults over 15, and 80 yen for elementary school and junior high school students. The park is located two minutes on foot from JR Nishi Tachikawa Station and 10 minutes on foot from JR Tachikawa Station. The name of this flower garden comes from the fact that the flowers are planted in a a rice field (tanbo in Japanese) before it is being used to grow rice. Here, a wide variety of flowers, such as Dimorphotheca sinuata, nemophila, snapdragons, daisies, poppies and Rodgersia podophylla, blossom in the 52,000m2 rice field. The 1,200 Somei Yoshino cherry trees along the Nakagawa River bloom in April, creating a beautiful backdrop that complements the flowers. The flowers blossom from early-March until May 5. From May 1 until May 5, you can pick the flowers for free. The Shirai Omachi Fuji Park is said to be the Sanin region’s greatest wisteria park (wisteria is fuji in Japanese). In the grounds of the park, a 500m long, 4m wide pergola lined with 150 wisteria saplings stretches out through the park. The opening time of the park varies each year, but is generally from late-April to early-May. Entrance to the park is 500 yen for people over 12, and free for elementary school students. The park is about 6km from JR Wadayama Station. Kawachi Fujien is a privately operated wisteria park opened in April 1977. The 80m and 220m wisteria pergolas and surrounding maple trees have made this a popular sight with both domestic and overseas tourists. The opening time of the park varies each year, but in spring it is usually open from late April to mid-May and in autumn from mid-November to mid-December.  The time to visit to see the wisteria is in early May and for the autumn colors, late November. Located on the Kuju highlands at an altitude of 850m, from March to November, this 20,000m2 park is filled with blooming flowers. In spring, you can enjoy the tulips, poppies and creeping phlox, in summer the lavenders, dahlias and sunflowers, in autumn, cosmos, marigolds and salvias, and in winter the pansies and stock. The park is closed from December to March. Entrance for adults (including high school students) is 1,300 yen for children (over 5) is 500 yen. Huis Ten Bosch is known as the kingdom of flowers. In the vast grounds, you can find 700,000 tulips, creeping phlox, one million roses, 14,000 hydrangea and sunflowers throughout the different seasons. Ikoma Kogen is a flower garden that stretches out at the foot of Mt. Kirishima. The fields are take on the vivid colors of rape blossom, pansies and the red, yellow, orange and white Iceland poppies in spring, and crape myrtle, salvia in summer, and the one million or so cosmos flowers in autumn. This is the place to enjoy seasonal flowers and the bright blue sky and refreshing breeze. Entrance to the park is 500 yen for high school students and over, 300 yen for junior high school students, and free for elementary school children and below.