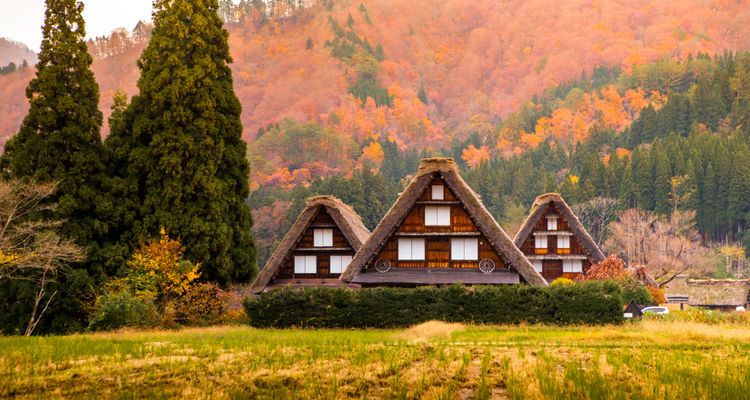 A Guide to 18 UNESCO World Heritage Sites in Japan

Japan currently has 14 cultural sites and 4 natural sites in the World Heritage List. Another 11 properties are in the Tentative List, waiting for future inscription. There are 48 Buddhist monuments in the Horyu-ji area, in 2 temple sites, Horyu-ji and Hokki-ji. The monuments date back to the late 7th or early 8th century, shortly after the introduction of Buddhism in Japan. It is also said to be the oldest surviving wooden architecture in the world. Himeji-jo is highly regarded as a masterpiece of 17th century castle architecture in Japan, constructed in wood. Because of its white plastered walls and its elegant posture, it is also called Shirasagi-jo (White Heron Castle). Shirakami Sanchi is the largest remains of a virgin beech forest in Asia, which covered Northern Japan since the eight to twelve thousand years ago. It is almost untouched and undisturbed by humans, making it a rare site in Asia. It is home to a great number of species. Yakushima is an island located approximately 60 km away from the southern tip of Kyushu. Yaku-sugi, cedar trees on the island that are more than 1000 years old, are the symbols of Yakushima. Composed of mountains reaching 2000m in height, it has a unique ecosystem.

This consists of 17 components in Kyoto, Uji and Otsu cities, built between 10th and 17th century. Since its formation in 794, Kyoto functioned as an Imperial capital of Japan until the Meiji Restoration. As a cultural centre of Japan, there are many famous sites including Kiyomizu-dera, Byodo-in and Rokuon-ji (known as Kinkaku-ji). The historic villages of Shirakawa and Gokayama still retains an old farmhouse style architecture with a thatched roof, called Gassho zukuri. This is the result of adapting to the harsh climate and their social and economic situations. The oldest houses are said to date back about 400 years. The Genbaku Dome is the only structure that remained the atomic bomb on 6th August 1945. Symbolising the destructive power of the atomic bomb, it also reminds those who see it, the importance of world peace. Itsukushima has long been an important place for Shintoism, the present shrine dating back to the 12th century, founded by Taira no Kiyomori, a powerful leader at the time. The scenery of the shrine with the Seto inland sea in the background is very symbolic of Japan. Nara, being the capital of Japan from 710-784, retains many valuable sites. The capital in Nara was called Heio-kyo, and was made in accordance with the Chinese capitals. 8 sites compose this heritage, including Todai-ji, Yakushi-ji and Nara Palace site. Nikko's heritage is composed of 2 Shinto shrines, Toshogu and Futarasan Jinja and one Buddhist temple, Rino-ji. As seen in the case that the Toshogu was built to enshrine the first shogun of the Edo era, Ieyasu, Nikko is a land that has a close relationship with the Tokugawa Shoguns.

11. Gusuku Sites and Related Properties of the Kingdom of Ryukyu [Okinawa] (2000) The Kingdom of Ryuku was the interchanging point of economic and cultural exchange between East Asia and South East Asia. These colourful, luxuriously decorated Gusuku sites represent its unique culture. In the deep green of the Kii mountains, lies the 3 sacred sights. The 3 sites are linked by a pilgrimage route, its total length reaching over 300 kilometers. It represents a unique fusion of Buddhism and Shintoism in Japan. In the most northern part of Japan lies Shiretoko, a home for many different species, including threatened sea birds and migratory birds. The scenic view of the deep green and the blue ocean is extraordinary.

14. Iwami Ginzan Silver Mine and its Cultural Landscape [Shimane] (2007) Iwami Ginzan Silver Mine took a leading role in the mass production of silver in Japan. Since its discovery in 1526, it was mined for more than 400 years. In the 16 - 17th century, Japan became the top producer of silver in the world, which contributed to economic development and cultural interaction between trading countries. Hiraizumi was established in the 12th century, as a centre of politics in the northern part of Japan. The temples and gardens comprising the site of Hiraizumi was created based on the ideas of Buddhism or moreover on the ideas to create an ideal world in the interpretation of Buddhism. Ogasawara Islands is composed of about 30 different islands located in the Pacific Ocean, approximately 1,000km south of Tokyo. It is home to many different animals including 195 endangered  bird species. Mount Fuji is one of the very symbol of Japan and has been  spiritually and culturally an important spot throughout history. The beautiful, majestic form of the mountain has long attracted the hearts of people worldwide. Tomioka Silk Mill was established in the late 19th century by the Meiji government as one of the first modern silk mills with western machines. The high quality silk produced at Tomioka was exported and took an important role in the modernization and industrialization of Japan.

There are currently these 18 sites on the World Heritage List. However, recently it is said that there is a high possibility for a new site to rank up from the tentative list. That is, Gunkanjima, the sites that signify the industrialization of Japan in the Meiji era in fields such as iron making, shipbuilding and coal production.