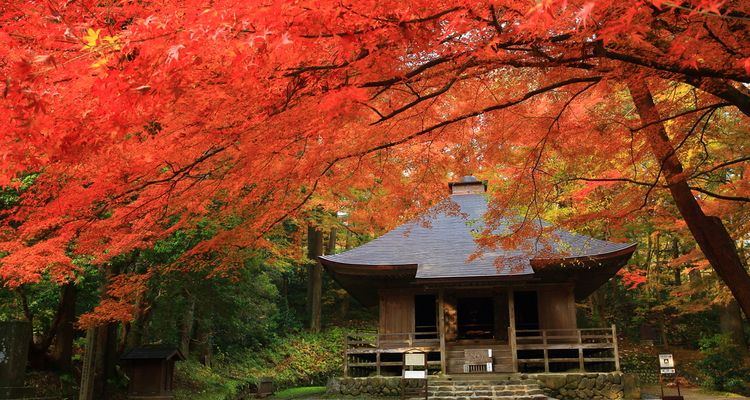 Hiraizumi is a small town located in southern Iwate Prefecture. This area was known as "the most peaceful land on earth" in the 12th century.

Iwate prefecture is the largest prefecture in Honshu (the main island of Japan) and is located in Central Tohoku. This prefecture is full of beautiful nature, such as the famous Mt. Iwate, the energetic Kitakami river, and the Pacific coast.

Hiraizumi, the Most Peaceful Land

Kiyohira, the first generation of Oshu Fujiwara, was the founder of Hiraizumi. His was a difficult life, full of war and the death of his family in battle. Because of these experiences, he made up his mind to avoid war and started thinking about making a paradise. When he moved to Hiraizumi in the 11th century, he first built a tower. This is the beginning of the history of Hiraizumi and a symbol of his setting his mind against war.

Tsukimi-zaka is the road that leads to the famous temples of Chusonji, one of two famous sites in Hiraizumi. 300 year old cider trees tower above the long road to the temple complex. These trees were planted by the Date clan during the Edo period, merely hinting at the rich history of this area.

Noh is one of Japanese traditional performance art.
This Noh stage was designated as a National Important Cultural Property in 2003.

This Noh performance is played on August 14th every year on this stage!
It's a very precious experience to see the beautiful performance on the National Important Cultural Property.

This golden temple was built in 1124 as a mausoleum for the leaders of the Oshu Fujiwara. It was built as a summary of all the amazing decorative techniques of the Heian period, including gold leaf and mother-of-pearl inlay. All of these gorgeous decorations make us truly feel like heaven on earth. Motsuji, the other famous temple complex in Hiraizumi, has one of the most beautiful Heian era Japanese gardens. This garden of heaven was preserved almost perfectly. The same cannot be said for the many buildings which used to stand near here, all of which burned down in 1226, never to be rebuilt. This lotus (Chusonji-lotus) is an ancient lotus nicknamed the 'miracle lotus'. A seed of this lotus was found in the casket of Yasuhira in the Golden Temple. The seed was preserved in a museum until, in 1998, they succeeded in making it bloom, miraculously reviving it after an 800 year slumber. Now, these lotus flowers bloom in a pond in Chusonji every year.