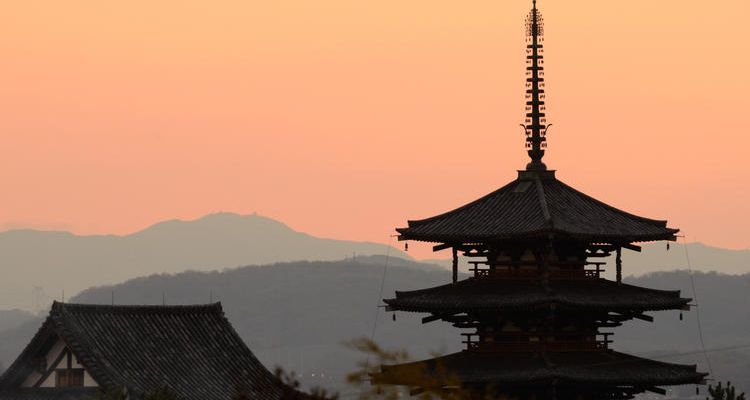 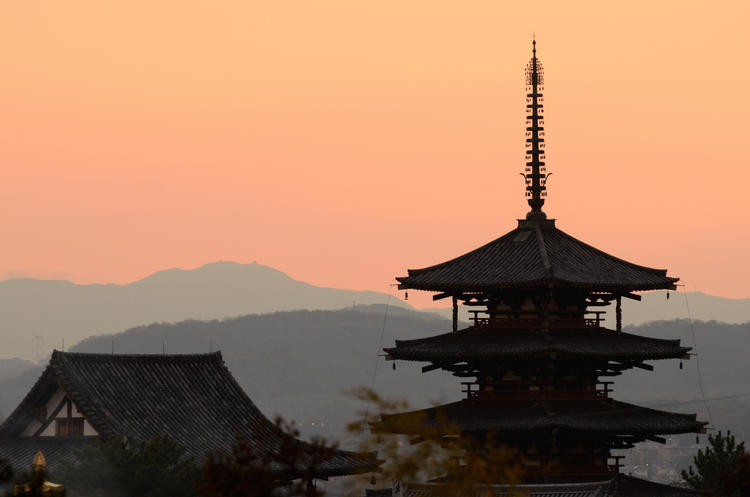 Horyuji: Legends and Mysteries of the Ancient Temple in Nara

Horyuji Temple, located in Ikaruga, Nara, houses the world’s oldest extant wooden structure and was the first place in Japan to be designated a World Heritage Site. Built by the renowned Prince Shotoku in the 7th century, this temple has accumulated many myths and legends about it throughout its thousand-year-old history.

Some of you might know Horyuji from the story “Prince Shotoku’s Fun Wooden Building” in the popular Japanese manga series Gag Manga Biyori. In fact, not only was Horyuji registered as Japan's first World Heritage Site, it also boasts the oldest wooden building in the world and, what’s more, its myths and mysteries have long fascinated visitors and historians.

The Entrance Path and Roof Tiles

As you walk down the broad avenue of Horyuji Sando (the entrance path), your first encounter with a national treasure is the Nandaimon (the southern main gate). Unlike most other historical buildings that have elaborate entrances, Nandaimon embodies an understated, modest Nara style.

As you enter beyond the Nandaimon to another long avenue towards the Chumon (middle gate), you are immediately transported back in time, devoid of any modernity. Take a closer look at the roofs, and you might notice that each building has its own set of onigawara (roof tiles depicting Japanese ogres), and each with a unique vivid expression.

Mysteries Between the Pillars

The first of Horyuji’s many mysteries is here at Chumon, at the end of the avenue. In Japan, influenced by the idea that "odd numbers are yang and even numbers are yin", the number of spaces between pillars at Buddhist temples is usually odd. At the Chumon, however, there are four between-pillar spaces, despite the fact that the number “four” sounds very similar to "death" in both Japanese and Chinese.

There is also a pillar right in the middle of the gate, which is unusual. Legend has it this pillar is built to keep vengeful spirits within Horyuji. Philosopher Takeshi Umehara even made a bold guess by saying Horyuji was designed to house the spirits of Prince Shotoku’s family.

The original Horyuji burned down in a fire 30 years after Shotoku's son, Prince Yamashiro, was forced to commit suicide by the rival Soga clan along with his family. Umehara believed that the Fujiwara clan who would later assume power rebuilt the temple to “seal in” the vengeful ghosts of the Shotoku family, and even theorized that the head of the Fujiwara was actually the one responsible for the annihilation of Prince Yamashiro! This controversial hypothesis attracted plenty of criticism and never made it into the history books, but it certainly adds much more intrigue to visiting Horyuji.

Walking down the corridors, you might notice that the pillars in the temple complex bulge slightly in the middle. Meiji architectural historian Chuta Ito believed that this is similar to the pillars of ancient Greek temples, theorizing that the two share the same architectural roots and even that Japan was the final stop on the Silk Road.

In order to validate his hypothesis, Chuta Ito traveled an unconventional route – heading south from China, through Burma, India, Greece, Egypt and the Middle East. Though ultimately there wasn’t concrete evidence to prove his theory, such an idea has been widely circulated, making visitors to Horyuji all the more curious.

The Sai-in in the west is the most important part of the temple, as it is home to the Five-Story Pagoda and the Kondo (sanctuary hall). Apart from the fact that these are the world’s oldest surviving wooden structures, they are also the pioneers of asymmetrical aesthetics in Japanese architecture.

Chinese and Korean aesthetics are centered on clean and symmetrical lines, which were reflected in their spatial designs. Temples in China and Korea are often symmetrical along a central axis, and this layout is often seen in temples in Japan that were established earlier than Horyuji, such as Shitennoji Temple in Osaka. From the Chumon, all structures from the Pagoda, the golden hall, and the lecture hall would normally be arranged in a straight line.

However, Horyujii went against this conventional aesthetic. Beyond the Chumon, you can see how the Pagoda and Kondo, which are completely different in height and shape, are set side-by-side, rather than in a row. Horyuji became a model for future temples, demonstrating an aesthetic unique to Japan.

The Mystery Atop the Five-Story Pagoda

Another mystery lies at the very top of the Five-Story Pagoda. Anyone Googling Horyuji would have come across “the seven myths of Horyuji.” While most of those myths are contrived, one of them states that “there are four scythes attached to the roof of the Pagoda,” which is absolutely true. No one can agree on why they were placed there, but some believed they were meant to keep the Shotoku family’s vengeful spirits within.

According to more credible historical records, however, the real reason was that the Five-Story Pagoda once caught fire in the Kamakura Period after being hit by lightning. Applying the principle of five elements, scythes were built on the wooden building to serve as lightning rods. Not as tantalizing as an instrument to suppress avenging ghosts, but it is still fascinating.

The Kondo is the oldest building on site. Retaining characteristics from the Asuka Period (538-710), its style has marked differences from the more common temples found in Japan that were influenced by the Tang and Song dynasties of China. On January 26, 1949, a fire rose from the Kondo, severely damaging the frescoes inside. This disaster gave birth to the Law for the Protection of Cultural Properties in Japan, and January 26 was designated as Fire Prevention Day for Cultural Properties.

Yakushi Nyorai, Shaka Nyorai and Amida Nyorai – Buddha statues representing the past, present and the afterlife – line the Kondo hall from the east to the west. According to the inscription on the back, Shaka Nyorai in the middle was created in the likeness and size of Shotoku Taishi after his death, thus supporting the claim that the Shaka statue is of the Prince, and that Horyuji is the resting place for his soul.

Adjacent to the east side of Kondo and the Five-Story Pagoda is Shoryoin, a temple dedicated to the worship of Prince Shotoku. It was originally a monastery, but the front end was later converted into a Buddhist temple. Shoryoin enshrines a wooden statue of the Prince, a designated Japanese National Treasure dating back to the Heian Era, and also a “Hibutsu”, meaning a Buddhist icon concealed from public view. It is only unveiled at a special event once a year on March 21, which is the eve of the anniversary of Prince Shotoku’s death. Written on the seal stamp of Horyuji is the phrase “in pursuit of harmony,” the first sentence of the Prince’s “Seventeen Article Constitution” and the essence of Japanese etiquette.

Behind the Shoryoin is the Daihozoin (the Great Treasure Gallery) with treasures passed down from over a thousand years ago. This includes some of the murals from the Kondo that were removed before the fire and thus survived, as well as the iconic treasures of Horyuji, the Statue of Kudara Kannon and the Tamamushi Tabernacle.

The Hidden Buddha in the Hall of Dreams

Last but not least is Yumedono, or the “Hall of Dreams” in the Eastern Precinct. The building was constructed on the site of the Prince’s private palace (Ikaruga-no-miya), where he lived until his death and where his son's family perished. Yumedono is full of mysterious treasures, the most important of which is the Kuse Kannon. In Japan, a number of Buddhist icons or statues are concealed from public view, and the Kuse Kannon is one of the most renowned of these hibutsu.

While the facial features of Kuse Kannon is very similar to that of Shaka Nyorai in Kondo, it is also said to be a life-size replica of Shotoku Taishi. What is unusual is that the halo of the statue was attached to the head by a large nail. Not only does this go against normal practices of making statues, it is also considered sacrilege in Buddhism. Scholars argue it was a voodoo-like technique to subdue the dead prince's spirit. What is even more bizarre was that the craftsman who carved this statue died immediately after it was completed. In the Kamakura Era, another Buddhist priest who wanted to replicate the statue also died before he could finish his work.

In the Edo Period (1603-1868), the Kuse Kannon was wrapped in cloth and enclosed in a Buddhist altar by monks and stayed hidden for over 200 years. The priests claimed that unveiling it would anger Shotoku’s grieving soul and would yield disastrous punishments such as earthquakes. It was not until the Meiji Period in 1884, when Ernest Francisco Fenollosa, an American art historian from Tokyo Imperial University, and Okakura Tenshin, a Japanese scholar commissioned by the Ministry of Education, visited and studied the temple, that the statue was unwrapped and saw the light of day again.

According to the accounts, the monks fled Yumedono after failing to stop the historians from unravelling the statue. When Fenollosa opened the rusty lock himself, rats and snakes dashed out from behind the dusty shrine. As 200 years' worth of filth was dusted off and the cloth was undone, the remarkable gilded statue glimmered in front of their eyes.

Fenollosa expressed his excitement at the time: "When the last piece of cloth was finally removed after centuries, one of the most unique and amazing statues in the world had finally re-emerged." Okakura Tenshin also wrote: "Seeing this statue standing at seven feet tall with a pearl in hand is probably one of my greatest pleasures in life."

Incidentally, both historians later lived for more than 20 years, unscathed by the so-called ‘curse’.

The Kuse Kannon is now open for public viewing during the spring and fall: once in April and May, and once in October and November, for about a month each time. This is longer than many other hibutsu, making it not so mysterious anymore. However, you might still feel its mystical aura when you see Kuse Kannon’s dignified expression in the depths of the Yumedono with your own eyes.

Tired from all that walking around the spacious temple grounds of Horyuji? Why not stop by Hiraso, a 150-year-old establishment on the Horyuji Sando, and get yourself some “Kakinoha-zushi”, or persimmon leaf sushi. This iconic Nara dish is a bite-size rice ball topped with pickled fish such as mackerel or salmon and wrapped in a persimmon leaf. The leaf has anti-bacterial properties, and it adds a distinctive flavor to the sushi. It doesn’t need to be refrigerated, so you can easily take it back to your hotel for a cheeky midnight snack!

Horyuji, with all its myths and mysteries, transports today’s visitors thousands of years back to the splendor of the Asuka Period. And with the passing of time, those ancient curses surrounding the temple that were once so frightening have evolved so that they are now a part of Horyuji’s charm.