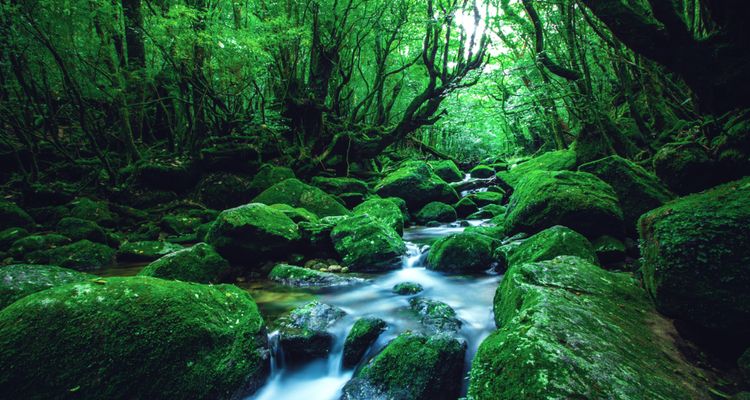 Yakushima Island is a World Heritage Site known for its lush, unspoiled natural scenery. Photographers love it to the point where the remote island was even mentioned on The Guardian and The New York Times Style Magazine. So, we're coming to you today with a handy guide for finding the best spots on the island for that perfect picture. Just make sure you prepare well in advance, because most of these spots require hiking a fair distance!

Yakushima Island is best known for the Jomon Sugi, the oldest and largest Japanese red cedar tree on the island. The age of the tree is estimated to be between 2,000 to 7,200 years! The tree is located on the highest peak on the island, so you'll need to hike there. The hike can take approximately 10 hours in which you'll cover around 22km in distance.

The Jomon Sugi itself is but only one of the many photo opportunities on this hike. The lush green forest is almost fairy-tale like and you might even encounter some of the local deer! Here are a couple of other spots on this trail that you should take notice of:

Wilson's Stump is a popular photo spot on the trail thanks to its interesting heart-shaped opening. You can walk inside the large trunk, so get creative with your photos!

There are a number of gigantic trees along the way, with the Daio Sugi being one of the most awe-inspiring.

These two cedar trees are connected at the trunk and invoke the image of a married couple. The trees are named the Meoto Sugi (Married Couple Cedar) for this reason.

While considerably younger than the Jomon Sugi, the Kuguri Sugi is still fairly famous. The hiking trail passes under the tree, making for an interesting photo opportunity.

The legendary Jomon Sugi will overpower you with its majestic size.

Getting to the Jomon Sugi is tough for those who're not able to hike for long distances. Thankfully, there's the option of going to the Kigen Sugi, the only large Japanese red cedar on the island that can be accessed without hiking.

Even though Yakushima Island is not short of beautiful natural scenery, Shiratani Unsuikyo stands out from the rest. The moss-covered rocks and forest floor give it a particularly mystical atmosphere. It's the inspiration for the forests depicted in the hit animated film, Princess Mononoke.

Here are a couple of hiking courses for sightseeing around the area:

This popular hiking course is around 2km and will take around 1 hour to complete. It'll lead you to the Yayoi Sugi, the largest tree in the area, in just 20 minutes.

The Bugyo Sugi course is slightly longer at 4km and will take around 3 hours to complete. It is believed that the large tree on this trail, the Bugyu Sugi, was discovered during the Edo period (1603 - 1868) by a magistrate ("bugyo" in Japanese) taking a break from searching out new logging spots.

Taiko Iwa is an incredibly large rock from which you can get a breathtaking view of the surrounding forests and mountains. This hike to Taiko Iwa and back is around 5.6km. It will take around 4 hours to complete, but it's worth it just for the view that also helped inspire Princess Mononoke.

The sights on Yakushima Island usually require a fair amount of hiking to get to, so some might find it a little tough to sightsee around. However, there are options like Yakusugi Land, a nature park that is suitable for hiking novices. You'll be able to see fallen trees like the Jamon Sugi, which looks very artistic with the curling wood forming an interesting visage.

Yakushima is not just about cedar trees! There's abundant wildlife inhabiting the forests, and if you hike along the Seibu Rindo forest path, you might see the local deer and monkeys!

Banyan trees always look great in photos because of their unusual roots. The trees in Shitogo Gajumaru Park form an interesting landscape that we're sure would make for an amazing and unique picture!

The impressive landscape that this powerful waterfall makes is great for photos! You'll be able to get a good view of the surroundings from the nearby observation point as well.

This majestic waterfall makes for a great photo opportunity. The largest of the waterfalls on the island at 88 meters in height, it is also one of the top 100 waterfalls in Japan.

One of the most famous mountains in Japan, Mt. Miyanoura is also the highest peak in Kyushu. It's a bit of a hike, but the views are worth the effort. The hike takes you through various different terrains which is great for photo opportunities.

You might also catch a glimpse of the animals that live on the mountain along the way. Just make sure not to approach them!

This beautiful beach is incredibly picturesque. The blue water is crystal clear and the long beach stretches on and on.

Sea turtles come here to lay eggs, too, so if you're in town during the right season, you might be able to catch a glimpse of the baby turtles as they hatch and head out to sea! Make sure you don't actually grab them though... let the wildlife be!

The sights on Yakushima Island are not restricted to what's on land. Grab a waterproof camera and take a dive - you might find some incredible scenery! The colorful coral reefs and abundant marine life are especially pretty and fascinating to look at.

With these many picture-perfect spots to visit, Yakushima Island is a place that you should definitely include in your Japan travel itinerary. There's a fair bit of hiking involved, however, so it wouldn't hurt to train a little before visiting!