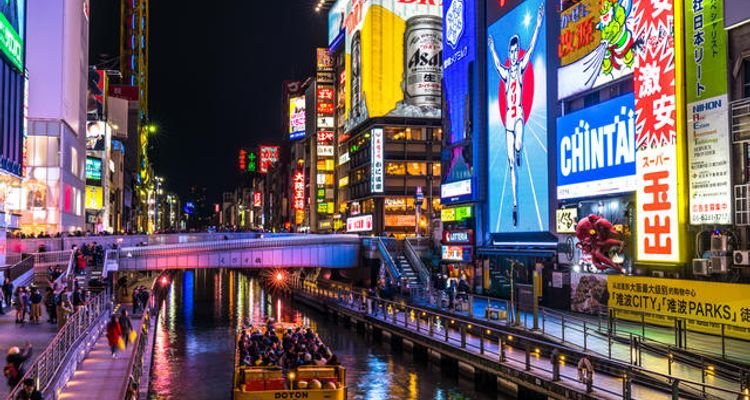 The Minami (south) area is one of Osaka's two major entertainment districts, and Namba is one of the highlights of this district. Namba has numerous photogenic things to see, such as the giant Glico running man billboard, the giant moving crab, and the statue of Cuidaore Taro. This article will introduce some of the must-see spots in Namba!

At the heart of the Namba entertainment district, you'll find the lively shopping street of Dotonbori. The beginnings of Dotonbori date back to the Edo period (1603 - 1868) as a town built around the traditional kabuki and joruri drama theaters that stretched out as far as the eye could see. Originally, there were theaters on the south side of the street running along the river and tearooms to entertain spectators were found on the north side. This is still a prominent feature that has carried over to the modern streetscape. Take a boat ride along the river around Dotonbori for another way to experience the joys of this town. You can get a good taste of the eccentric Dotonbori by listening to the performance of a rakugo master or a jazz band.

The particularly eye-catching giant billboards definitely come to mind when you think of Dotonbori. Aside from the Glico running man billboard, giant three-dimensional billboards depicting seafood, gyoza (dumpling), and sushi are seen everywhere in Dotonbori, including the Kani Douraku, a giant crab billboard. The flashy and impactful billboards are a symbol of the present-day commercial hub of Osaka and have become synonymous with Dotonbori.

In addition to the giant billboards, there is another iconic face in Dotonbori: Cuidaore Taro, the statue that welcomes you to the Nakaza Cuidaore building. Taro had stood in front of the once popular restaurant, Osaka Meibutsu Cuidaore ("kuidaore" means "to eat until you drop"), as its mascot. He disappeared for a while when the restaurant closed, but he reappeared at the Nakaza Cuidaore building store on the same street, charming passersby just as he did in the past.

Did you know that the origins of Sennichimae in the Minami area start in Hozenji Temple? Hozenji Temple, where memorial services for the dead (called "sennin nenbutsu") were held, was affectionately referred to as Sennichiji. That is why the area in front of the temple's gates has become to be known as Sennichimae. Another famous location near Hozenji Temple is the area known as Hozenji Yokocho, with its small restaurants and izakaya (Japanese pubs) all lined up as if standing shoulder to shoulder. For a taste of the former Osaka area charm, grab a friend and head to Hozenji Yokocho, with its red paper restaurant lanterns lighting up the streets at night.

Osaka Shochikuza Theatre is an impressive Western-style theater with a beautiful neo-renaissance style main entrance. It was originally a movie theater, but after many turns and twists, it now also has the facilities to hold kabuki plays, musicals, concerts and so on. The theater is located right behind the Glico billboard at the center of Dotonbori. The building is a remnant of the Taisho era (1912 - 1926) in which it was completed and attracts the attention of many sightseers.

Namba Walk is a shopping street that connects two underground passages stretching from JR Namba Station to Osaka Metro Nippombashi Station. It is divided into three zones, and one of the highlights is the gallery located in the first avenue near JR Namba Station that displays reproductions of artworks owned by the Art Institue of Chicago. Anyone can enter here freely and appreciate these artworks. The area is designed so that you can get above ground straight away from exits in various places, so you can enjoy window shopping down here as you head toward your destination in the streets above. Another good point is that it is also easily accessible from the JR, Kintetsu, Hanshin, Nankai and Osaka Metro subway lines.

Namba Ebisubashi-Suji Shopping Street is an arcade shopping street that connected Takashimaya Osaka right by Nankai Namba Station to the Glico billboard at Ebisubashi. Take this street when you head in the direction of Dotonbori. Go for a walk along this street, which is also called "the Hanamichi (a walkway through the audience to the stage in a kabuki theatre) of Minami," as you take in the atmosphere of the street. There is also the kitchen and cookware specialty shopping street called Sennichimae Doguyasuji Shopping Street and Kuromon Ichiba Market, which is also known as "Osaka's Kitchen." You're bound to find many stores that are fun just to look at.

Naniwa Meibutsu Ichibirian is a specialty store for Osaka souvenirs. Here you can find all sorts of souvenirs unique to Osaka, from Billiken and Cuidaore Taro merchandise to novelty gifts like takoyaki (octopus balls) candy that will have you thinking, "Is it really okay to eat this?" Just in the Namba neighborhood itself there are three stores. Aside from the main store in Ebisu Bashi-Suji Shopping Street, there is also the Dotonbori branch and the Namba branch. By the way, the Dotonbori store is on the 1st floor of the Nakaza Cuidaore building where the statue of Cuidaore Taro is.

If you're planning on seeing a Yoshimoto Shinkigeki (Yoshimoto New Comedy) performance, Namba Grand Kagetsu, "the palace of laughter", is the place to go. It is a theater that specializes in comedy and is run by the Yoshimoto Creative Agency. Public performances are put on daily, both during the day and at night, but be prepared when you go, as the restrooms and souvenir stands are likely to be crowded. The stage is really close to the seats, which means you can see entertainers who appear regularly on TV up close!

Across from Namba Grand Kagetsu is the Yoshimoto Manzai Theater, where live shows and performances featuring young performers are held. While the entry fee is quite reasonable, the content of the public performances, including mini shinkigeki in which mainstay and veteran performers also appear, is top notch. The best part is that you are able to see the talent of Yoshimoto's popular entertainers even before they become known nationwide. By the way, on the 7th floor of the same building, there is a museum specializing in Kamigata (Edo period Osaka and Kyoto) entertainment and on the basement floor is popular J-pop girl group NMB48's home ground, the NMB48 Theater.

Fully Enjoy the Town of Food and Laughter

What did you think about these recommended sightseeing spots in Namba? It's no exaggeration to say that Namba is now one of Osaka's iconic tourist destinations. Go enjoy yourself in these sightseeing spots, but take care not to overdo it with too much eating and laughing!