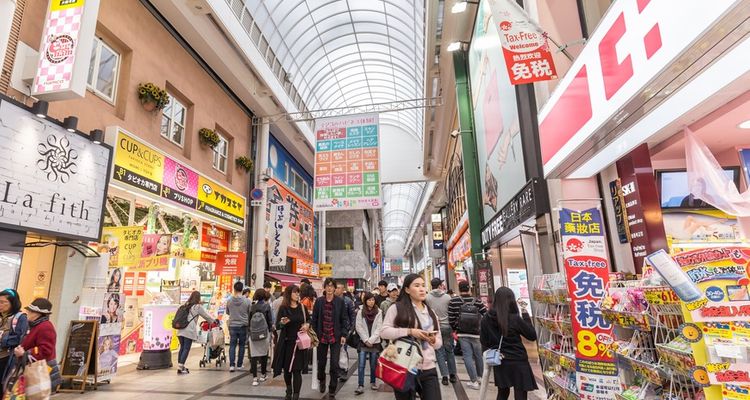 When on vacation, it can be easy to open your wallet and spend like there is no tomorrow. After all, you worked hard to get here and deserve to treat yourself, right? But that doesn’t mean that you can't keep your eye out for a good deal. And really, who doesn’t like a good deal? Even better, if you can get a taste of retro Japan and walk away with a bargain, that's two birds with one stone! Today, we will be looking at a few special places in Osaka popular among tourists and locals alike for the shopping and ambiance. Welcome to the city of “shotengai”!

“Shotengai” can be directly translated to “shop town,” but more often you will hear it referred to as a shopping arcade. Shotengai are basically long stretches of street with shops lining each side, many of which also have a covered ceiling. Shotengai still play a key role as commercial centers in many towns across Japan and can offer goods and services at relatively competitive prices.

There is one city that stands out among the rest for its connections to shotengai: Osaka! Osaka is the third-largest city in Japan in terms of population and has a reputation as a merchant city, a place where people always have money on the mind and are on the lookout for good deals. It’s no wonder, then, that some of the most famous shotengai in Japan exist in Osaka. So, let's go ahead take a look at six of Osaka's most notable shotengai!

Arguably Osaka’s most famous shotengai is called Tenjinbashisuji. 2.6 km (1.6 miles) long and home to roughly 800 shops, Tenjinbashisuji has been called the world's longest covered arcade. Visually, it is pretty impressive with its vaulted glass ceilings and traditional decorations, some of which are in the shape of Shinto symbols! Tenjinbashisuji is home to all manner of shops from food to apparel, and you can find pretty good deals on almost anything you can think of. Notable stores include a tea shop that has been in operation since 1868, kimono and lacquerware shops, tofu shops, and stalls selling all manner of fried foods. Two items of particular interest to any foodies visiting Osaka will be Takoyaki (fried octopus balls) and Okonomiyaki (savory pancakes). There are many other Osaka delicacies worth trying, but too many for the scope of this article, so please take a look at “29 Cheap and Delicious Restaurants in Osaka” for more info on the local cuisine.

Senbayashi: The Shotengai with the Cheapest Deals

With the moniker “The Happiest Shotengai in Japan,” it’s impossible to pass up on visiting Senbayashi. Although not as long as its famous brother Tenjinbashisuji, Senbayashi’s 600-meter length is packed with 220 shops and a lively atmosphere popular with both young and old alike. In addition to super-cheap goods such as handbags for a little as 1,000 yen or t-shirts for only 500 yen, this bargain shotengai is also an awesome place to do what the Japanese call "tabearuki," meaning "eat and walk." Shops selling cheap yet freshly-made grab-and-go items including croquettes, katsu sandwiches, and traditional Japanese sweets can be found up and down the street, making it a great place to grab a bite or two while soaking up the local vibe.

Another interesting point that is sure to intrigue history buffs is the handful of pre-WWII residential-style houses here that have been remodeled and transformed into shops.

Shinsaibashisuji: Satisfy Your Passion for Style and Fashion

Shinsaibashisuji was once referred to by locals as the “Ginza of West Japan” and has a history that goes all the way back to 1872! Located in one of Osaka’s most famous tourist areas, Dotonbori, this shotengai is known for its large number of fashionable clothes options among its roughly 180 shops (many of which are tax-free for visitors from overseas!). You can find everything from fast fashion brands like the world-famous UNIQLO, H&M, and ZARA to smaller, more unique clothing stores.
Shoe fans should check out Onizuka Tiger, while fans of casual streetwear should not miss out on WEGO.

Enjoy the nearby neon glow of Dotonbori as you shop the latest trends in Shinsaibashisuji! Right down the road from Shinsaibashisuji are our next two shotengai, Sennichimae Doguyasuji and Kuromon, so consider visiting all of them in one trip!

Osaka is not only famous for its merchant background but also its food culture. Some of the most highly praised Japanese foods that you've likely heard of come out of Osaka. This convergence of food and the merchants who sell the ingredients and goods led Osaka to be called “Japan’s kitchen” back in the day. Sennichimae Doguyasuji carries on the spirit of Japan’s kitchen, as you can buy almost any kitchen related item you can think of here, from pro cookware and tools to extra sharp Japanese knives, and even plastic model food displays like the ones seen in Japanese restaurant windows (which you can buy or even make yourself!). You could even pick up your own takoyaki maker! Or if bringing home a whole takoyaki maker sounds too much, it is also possible to try making your own takoyaki through an interactive cooking experience.

Kuromon Market: The Kitchen of Osaka

Kuromon specializes in food, and while Sennichimae Doguyasuji carries on the spirit of “Japan’s Kitchen,” Kuromon has actually co-opted the name for itself. This shotengai is formally referred to as a “market,” but maintains the classic features of a shotengai, with its shop-lined street and covered ceiling. The roughly 180 shops here are made up of mostly fresh seafood, meat, and fruit and vegetable stands, along with many eateries as well. Many shops not only sell fresh produce, but also offer grab-and-go food, which can be eaten right there, or enjoyed while strolling along the market and taking in the sights! You can really get some pretty rare food experiences here, such as raw uni (sea urchin) or tempura available as a takeout option! If you love food, this is the place in Osaka that you absolutely can't miss!

Our last shotengai may be shorter than the rest, but it makes up for it with loads of charm. Nanyodori is flush with the vibes of a bygone era. Take a stroll down memory lane from Japan’s Showa era (1926-1989), where the once bright colors of the shops are now faded but not jaded! Enjoy the classic pleasures of the 60s, 70s, and 80s by grabbing a drink at one of the many standing bars, popping in a few coins at the retro game arcade, or watching some old-timers play classic Japanese board games like shogi at a board game salon. “Janjan Yokocho” as it is nicknamed, is sure to delight to this day. The name “jan jan” comes from the sound of shamisen (a Japanese type of three-stringed lute) shop owners used to play back in the day to attract customers. So, grab a drink, bite into some famous Osaka kushikatsu (deep-fried meat or vegetables on a stick), and try your hand at one of the arcades for some retro fun. This small but colorful shotengai is a blast from the past.

When traveling in Japan, there are more than enough reasons that everyone should visit Osaka. For anyone with a penchant for shopping and a nose for sniffing out good deals, however, the city known for shotengai is all the more a must-see.

If you're interested in reading about more shotengai, check out our article on Tokyo's shotengai.