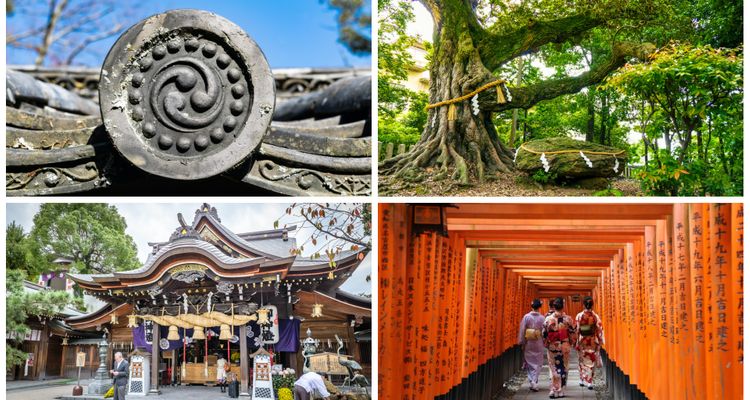 Shinto Symbols: The Meanings of the Most Common Symbols Seen at Japanese Shinto Shrines

The Japanese religion called Shinto may seem clouded in mystery to many non-Japanese. Indeed, even to Japanese people, there are many aspects of Shinto that are not well-understood, particularly the meaning behind the various Shinto symbols. Learning a little about Shinto will lead to many questions: Why are the gates red? What is the relevance of the lightning-shaped paper decorations? And why are there ropes wrapped around trees? Today we will be diving into the world of Shinto, discussing its background and the hidden meanings behind some of Shinto's more striking symbols.

Before we get into the meaning behind Shinto symbols, let’s go over some of the basic concepts connected to Shinto to get a better understanding of the religion (if we can even call it that). Like any religion, it is difficult to concisely define Shinto in a few words, however, it is notable for its polytheistic worship of “kami,” meaning “gods or spirits that exist in all things.” Because of this belief that kami reside in all things across nature—such as mountains, trees, waterfalls, etc—Shinto is also classified as an animistic religion, one that worships nature or nature spirits. Another term to describe Shinto is “kami-no-michi,” or “the way of the gods.”

Unlike some religions, there is no central authority that dictates the rules and regulations of Shinto, and as a result, practices can vary greatly from region to region and even neighboring shrines.

Now that we have laid the groundwork for what makes Shinto unique, let's take a look at some of the more notable Shinto symbols and motifs and the meanings behind them. The six Shinto symbols we will be covering today are "torii," "shimenawa," "shide," "sakaki," "tomoe," and "shinkyo."

Perhaps the most recognizable symbols of Shintoism are the majestic gates that mark the entrance to Shinto shrines. Made of wood or stone, these two-post gateways are known as “torii” and show the boundaries in which a kami lives. The act of passing through a torii is seen as a form of purification, which is very important when visiting a shrine, as purification rituals are a major function in Shinto.

After learning about what torii are, it is natural to wonder why so many are painted such a vibrant shade of red (or orange). In Japan, the color red is representative of the sun and life, and it is also said to ward off bad omens and disasters. Once again, by passing through these red gates, visitors to a shrine are cleansed of any bad energy, ensuring that only good energy will be brought to the Kami that resides inside. On a less spiritual and more practical note, the color red is also the color of the lacquer which has traditionally been used to coat the wood of the torii and protect it against the elements.

Having said this, not all torii are red. There are a variety of torii made of unlacquered wood, stone (usually white or grey in color), and even metal. While there are a great number of color variations (including black), there is an even greater number of shapes (somewhere around 60 different varieties!). The two most common kinds, however, are "myojin" and "shinmei" torii. Myojin torii are curved upwards at their ends and have a crossbeam that extends past the posts (as in the photo above). Shinmei torii, however, have a straight top and a crossbeam that ends at each post (as in the photo below).

・Some of Japan's Most Recognizable Torii

When speaking of torii, perhaps the most famous location is Kyoto's Fushimi Inari Shrine. This iconic shrine plays host to literally thousands of orange torii gates that wind up the mountain.

Another very famous torii can be found at Ikutsushima Shrine on an island called Miyajima. Only 40 minutes from Hiroshima City, this majestic torii is quite spectacular as it rises up out of the sea.

Oarai-Isosaki Shrine in Ibaraki Prefecture is home to another iconic torii that sits on a rocky outcropping off the shore. This torii is simple yet beautiful, particularly at sunset or when a turbulent sea sends waves crashing onto the rock.

One of Tokyo's most iconic torii is the giant first gate at Yasukuni Shrine. The massive metal torii has a simple design, but is awe-inspiring due to its gigantic size, standing 25 meters (82 feet) tall.

Another of the most highly-photographed torii gates in Japan is at Hakone Shrine in Hakone, Kanagawa Prefecture. The gate stands in the water of Lake Ashi near the foot of Mt. Fuji. This torii is so popular that those hoping to take a photo often need to wait in line for more than two hours.

Saitama Prefecture's Mitsumine Shrine not only has a gorgeous setting, nestled in the mountains around the city of Chichibu, but it is also home to a beautiful gold-accented torii with a less common "miwa" design.

"Shimenawa" are ropes, often adorned with white zig-zag-shaped ornaments. They can vary greatly in size and diameter, with some being not much more than a few threads, while others are massive and thick! Shimenawa are typically used to mark the boundaries of sacred space and are said to ward off evil spirits.

They are often seen hanging from torii, wrapped around sacred trees and rocks (within which kami are said to reside), or even fastened around that waist of grand champion sumo wrestlers! These special trees, rocks, and "yokozuna" (sumo grand champs) are known as “yorishiro,” meaning something that attracts gods or has a god living within.

One particular item you may notice when walking on the premises of a shrine is the zig-zag white papers, often hanging from the aforementioned shimenawa. These curious items can be found all over the place within a shrine and are often used to demarcate the boundaries of a sacred space or border within the shrine. The lightning-shaped decorations are called “shide” (pronounced "she-day") and are also used in a variety of purification ceremonies. If you go at the right time, you might even see shide attached to special wands used by Shinto priests performing said ceremonies.

There are two theories behind why shide have their lightning shape. One claims that the shape is representative of the infinite power of the gods, and another suggests that as rain, clouds, and lightning are elements of a good harvest, lightning-shaped shide are a prayer to the gods for a bountiful season.

There are a variety of different shide-adorned wands used in Shinto, with subtle differences between them in terms of style. Two of these wands are called “gohei” and “haraegushi." Shrine maidens called “miko” use the gohei wand with two shide attached in rituals and ceremonies to bless people, but the main purpose of the wand is to bless objects or cleanse sacred places of negative energy.

The haraegushi wand with many shide attached is used for the same purpose of cleansing but under different circumstances. A Shinto priest will rhythmically wave the haraegushi over a person or a person's newly obtained objects, such as a new house or car to perform this purification ritual.

As mentioned previously, nature worship is a key element of Shintoism, trees playing a particularly important role. Certain types of trees are considered sacred and are known as “shinboku.” Not unlike torii, these trees, which surround a shrine, create a sacred fence inside of which is deemed a purified space.

Although there are a few types of trees that are considered sacred, perhaps there is none more important than the sakaki, a flowering evergreen native to Japan. Sakaki trees are commonly found planted around shrines to act as a sacred fence, and a branch of sakaki is sometimes used as an offering to the gods. One of the reasons that sakaki trees are considered sacred in Shinto has to do with the fact that they are evergreens and therefore symbolic of immortality. Another more important reason is tied to a legend in which a sakaki tree was decorated in order to lure Amaterasu, the sun goddess, out of her hiding place inside a cave. This myth (described in more detail in the shinkyo section below) gives a special symbolism to the sakaki tree that is celebrated in Shinto ritual to this day.

The swirling "tomoe" symbol may remind many of China’s well-known yin-yang symbol. However, the meaning and use are quite different. Tomoe, often translated as “comma,” were commonly used in Japanese badges of authority called “mon,” and as such tomoe are associated with samurai.

Tomoe can feature two, three, or even four commas in their design. The three-comma "mitsu-domoe", however, is the most commonly used in Shintoism and is said to represent the interaction of the three realms of existence: heaven, earth, and the underworld.

Keep an eye out for tomoe and you will see them used to decorate all manner things from taiko drums and protective charms to lanterns and Japanese-style roofs!

Our final Shinto symbol for discussion is in the “shinkyo,” or "god mirror," a mystical object said to connect our world to the spirit realm. Shinkyo can be seen displayed at Shinto alters as an avatar of the kami, the idea being that the god will enter the mirror in order to interface with our world.

This belief goes all the way back to a legend involving the Japanese sun goddess, Amaterasu, who once went into hiding in a cave, thereby plunging the world into darkness. In order to coax her out of the cave, numerous other gods gathered outside the cave and threw a party. The gods hung jewels and a mirror from a sakaki tree in front of the cave to distract Amaterasu's attention should she venture outside. Curious about the festive noises, Amaterasu peeked out of the cave and asked why the other gods were celebrating. In response, she was told that there was a goddess even more beautiful than herself outside the cave. Upon exiting the cave, she was greeted by the mirror and her own reflection, at which point, the other gods took the opportunity to seal the cave shut with a shimenawa.

Later, this same mirror was later given to Amaterasu's grandson with the instructions to worship it as if it were Amaterasu herself. In this way, one does not necessarily pray to a shinkyo, but rather to the god of that shrine for which the mirror is acting as a physical avatar. The shinkyo is considered a "shintai," or a physical stand-in that the kami can inhabit in the human realm.

By the way, the cave described in the legend is actually a real place, now called the Amanoyasugawara Shrine, in Miyazaki Prefecture (pictured above). It's a bit off the beaten path but is a very cool place to visit once you know this story.

Even with what we have covered today, there is much more to learn when it comes to Shinto, the way of the gods. If you are curious to learn more about Japanese culture and shrines, take a look at our articles “Proper Shrine Worship Etiquette” and “10 Important Points To Note About Praying at a Shrine”.

Although we have only scratched the surface of Shinto symbols in this article, hopefully, it will give you a greater appreciation for the small details and fascinating stories behind the symbols. When you have the opportunity to visit a Shinto shrine, please keep an eye out for all of the symbols mentioned above!