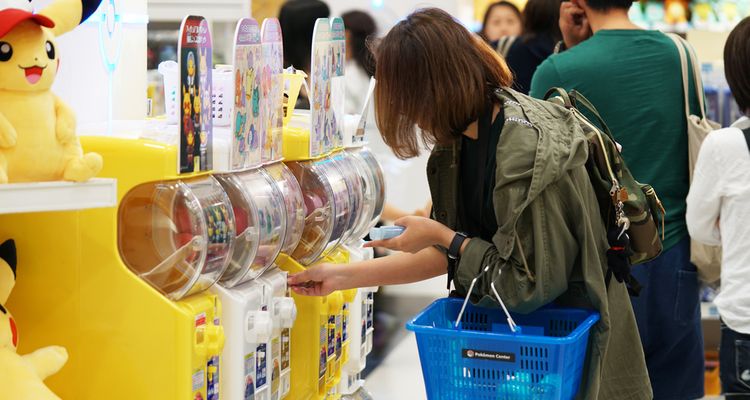 What Are Gashapon Machines? Japanese Capsule Toys Are Not Just for Kids!

Japan is the birthplace of all sorts of collectibles, from figurines of your favorite anime characters (like Pokemon or Gundam or Sailor Moon) to the wackiest trinkets (they even have underwear for water bottles!). Particularly popular, and particularly cheap, are items obtained from capsules residing within “gashapon” machines. In this article, we’ll answer all your gashapon-related questions such as: What are Japanese capsule toys? What are the machine’s origins in Japan? What's so special about them? Where can I find gashapon? And what are some popular gashapon throughout the years? Read on to find out!

“Gashapon” or "Gachapon" is the word used for both the machines themselves and the capsule toys, figurines, and other collectibles that are dispensed. But what does gashapon mean? The term comes from the sound made when cranking the machine (“gasha”), followed by the dull thud produced when the capsule emerges (“pon”).

One item costs anywhere between 100 and 500 yen, although you never know what you’ll get! Each machine has a different theme that shows the potential prizes, but you don’t know exactly which one will come out. The random nature of the machines and the enormous variety of goods available make gashapon an addictive Japanese tradition. They’re not just for children, either. Adults are sure to find goods and characters they can enjoy, too!

How to Use a Gashapon Machine

Using a gashapon machine is similar to using a gumball machine. Simply insert coins until you've reached the value listed on the machine, twist the crank, and wait for your capsule toy to be dispensed. Large bills and credit cards aren't needed (or accepted), so gashapon machines are a great way to snag some cheap souvenirs with leftover coins before you head home.

History of Gashapon: A Western Invention Remade in Japan

Gashapon are similar in appearance and mechanical design to gumball machines or cheap vending machines in the West, but the similarities stop there. While goods obtained from a vending machine in the West are often known for their cheap quality, items that come in gashapon are anything but.

The modern day gashapon owes its existence to a man named Ryuzo Shigeta. Shigeta received a vending machine from the United States sometime in the 1960s and set upon improving the machine, finally deciding to place each of the items in a plastic container or capsule. The machines and their capsules became a huge hit, leading to the immense popularity they enjoy today. There are nearly 360,000 gashapon in Japan, and the word is even trademarked by the company Bandai. New gashapon are released monthly, adding to the popularity and uniqueness of the goods.

What’s So Special About Gashapon?

Capsule toys, trinkets, keychains, and other goods obtained from gashapon are known for their high quality despite their low price. Open up any capsule and observe: the quality of the product within will be obvious. Furthermore, Japan is a culture that values finely-crafted goods, giving rise to the term “monozukuri.” "Mono" means "thing," while "zukuri" means "make". Monozukuri is the Japanese concept of making as high-quality of a product as possible.

Beyond the quality of the goods, “otaku” culture in Japan is another reason for gashapon’s popularity. While often associated with anime or manga fans, the word “otaku” is more generally used for anyone obsessed with collecting or consuming a certain good or product. Character sets, special items, limited-time merchandise, and more can all be obtained from gashapon machines, giving collectors plenty of collectibles to snag and ensuring the machine’s popularity.

Since there’s no guarantee as to what item will be inside the capsule, consumers keep coming back for more until they complete their favorite set or collect all of their favorite characters. And it isn't all just capsule toys or figures, either. You can get an enormous variety of products, ranging from mini-games and accessories for your pets to miniature food. There is also a fair amount of straight-up wacky stuff like "kimo kawaii" (creepy cute) capsule toys featuring strange creatures from the depths of the sea, bugs, and weird but cute animals.

Shut Up and Take My Money! Where Can I Find Gashapon?!

Gashapon are nearly ubiquitous throughout Japan. Located near supermarket entrances, within shopping malls, at train stations, and within many other everyday places, you’re bound to run into a gashapon at least once during your trip to Japan. However, there are a few dedicated gashapon meccas featuring row upon row of the machines with all sorts of themed goods inside.

Tokyo Station is host to the so-called Tokyo Gashapon Street, an area featuring over 50 unique gashapon machines. Here you can find whichever theme suits your fancy, from anime and manga characters to uniquely designed gashapon. It’ll be hard to just buy one!

As gashapon are particularly beloved by anime and manga fans, it’s no wonder that Akihabara, the anime and manga haven of Tokyo, also hosts a massive gashapon selection at Akihabara Gachapon Kaikan, a location with nearly 500 capsule toy machines for visitors to choose from. This gashapon specialty store has the biggest variety of gashapon toys in Tokyo, and every month they receive a ton of new, popular products.

Akihabara Radio Kaikan is another popular location. On the 5th floor of Radio Kaikan there's Kaiyodo, one of the most well-known companies for anime figurines. The shop hosts nearly 60 gashapon machines, featuring original items as well as collaborations, like the Souvenir Capsule Figure Series that features small, plastic versions of famous Japanese landmarks.

If you find yourself in Osaka, the Nipponbashi area also has gashapon machines among other shopping attractions for anime and manga fans. For more about the area, check out these 10 Must-Visit Stores for Anime and Manga Fans in Nipponbashi.

Of course, you can also find them at other popular locations such as Narita and Haneda airports and any Yodobashi Camera store you visit. However, if you see a vending machine or line of products that catches your eye, don't wait to grab one! These machines change often, and there's no guarantee that a particular machine will still be around when you return.

Popular Gashapon Toys Throughout the Years

With new and limited runs of gashapon released almost every month, the sheer number of gashapon that are out there for collectors is a bit overwhelming. Still, there are a few notable sets that have captured the hearts and minds of many throughout the years and have retained their popularity to this day.

A relatively recent yet extremely popular gashapon series is called "Fuchico on the Cup." The original "cup edge" character's popularity exploded on social media and was responsible for creating the "cup edge" genre of gashapon toys. Fuchico is an office lady that can be situated on the edge of a cup; her name is actually a pun on the Japanese word for edge (“fuchi”). Fuchico comes in a variety of poses and was designed to liven up pictures of food on social media. Sporting all sorts of outfits, colors, and poses, Fuchico was an instant sensation and helped broaden the customer base for gashapon.

One of the first gashapon toys to enjoy great popularity was "Kinniku Man Keshigomu." "Kinniku Man" is the name of the main character from a popular manga series of the same name, while "keshigomu" means "eraser." These collectible erasers come in all sorts of poses and variations, while the Muscle Man himself sports a lot of brawn topped off with a small spike and the character for 'meat' on his head. This capsule toy debuted in 1983 and it was one of the first very popular gashapon.

Perhaps the king of all gashapon are the Gundam gashapon, with literally hundreds of miniature figurines available encompassing every era of the anime's existence. These figures were some of the first to ever be sold within a gashapon. Characters, standalone figurines, or those that require assembly similar to the immensely popular Gundam model kits are all available.

Whether you plan on traveling to Japan for only a week or will be here for an extended period of time, gashapon are worth seeking out as they make for great souvenirs or fun collector's items. Be sure to save a few hundred yen for these uniquely Japanese vending machines so that you can bring home a bit of Japanese culture with you.