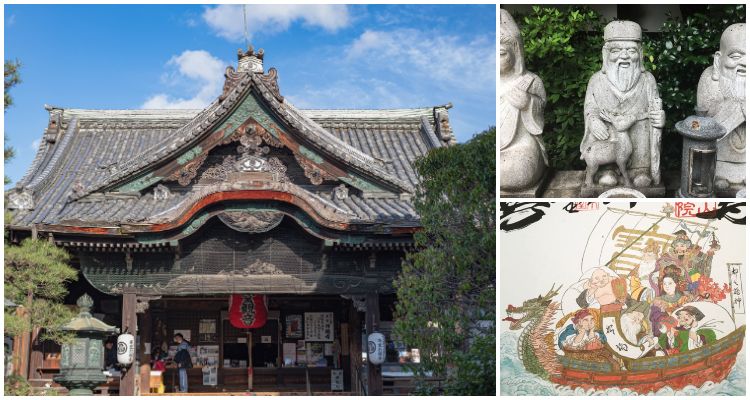 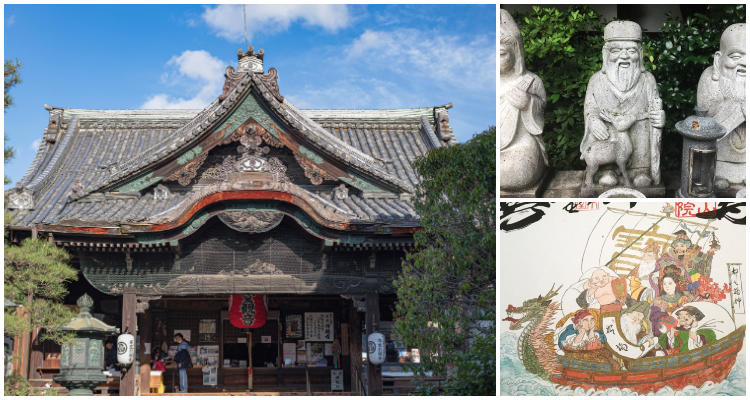 The Miyako Shichifukujin (Seven Lucky Gods Pilgrimage) is a popular pilgrimage in Kyoto that anyone can complete during a holiday to Japan. To do it, you need to visit the seven shrines and temples of the Seven Lucky Gods and collect a special calligraphy stamp for the deity enshrined at each stop. The stamps are called "gohoin," and collecting all seven is said to bring blessings and happiness. In this series, local college students take you on a journey through the Miyako Shichifukujin pilgrimage and report on all the must-see sites at each location! In our first stop, we head to Gyogan-ji Temple in Kawaramachi!

This is the stamp board where you keep your Gohoin stamps from each shrine. On the right is the completed stamp board.

The map below shows the seven designated temples and shrines of the pilgrimage. Each place has a special stamp board that you can collect the stamps on. There's a belief that you will be granted blessings especially at the beginning of the year, so tour buses tailored to fit the pilgrimage operate in January, with many people going on Shichifukujin pilgrimages every year.

Located in the southeast of Kyoto Gyoen National Garden, Gyogan-ji Temple is a temple founded in 1004 by a Buddhist monk named Gyoen Shonin.

Before Gyoen Shonin became a monk, he went hunting and shot a doe with an arrow, but it gave birth to a fawn from the wound. The doe licked and cared for the blood-covered fawn without paying any mind to her own injury, and died soon after. Having witnessed the scene, he deeply regretted all the killings he committed in his life up to this point, and went on to become a Buddhist monk. Since then, the monk dressed in the skin of the dead deer and was called the Deerskin Saint. Gyogan-ji Temple is also known as Ko-do (Temple of Pelt) for this reason.

Gyogan-ji Temple has been honored as a well-known temple in Kyoto since its foundation. It has been burned down and relocated due to wars and fires several times, but has always been restored by enthusiastic followers with a spot in the central part of the city. Many small temples stand within these precincts of this temple with a history of over 1,000 years, and one of them worships Jurojin, one of the Shichifukujin.

Jurojin is China's Laozi in the shape of an enchanted figure after he ascends to the upper realm. He is also said to be the Taoist deification of the star Canopus, or the Old Man of the South Pole. One distinct feature of Jurojin is that he is accompanied by a 3,000-year-old deer, and it is believed that he brings fortune in the areas of money, children, health, and longevity.

Jurojin is enshrined in Jurojin Shindo. It is a small temple within Gyogan-ji Temple that is visited by many people who wish for longevity.

The Atmosphere of the Precincts

Gyogan-ji Temple is located in an urban area, and is surrounded by other buildings nearby. The gate is rather small, but the inside is spacious and has a calm and relaxed atmosphere.

By looking straight ahead with the gate at the back, you can see the Hondo (main temple), which was built in 1815 and registered as a tangible cultural property of Kyoto City. In the main temple, there is a wooden statue of thousand-armed Kannon, which was carved by Gyoen Shonin. It is normally away from public view, but it becomes open to the public only on the 17th and 18th of January each year.

Other than Jurojin Shindo, there is a lot to see in the temple precincts. The picture above is a 3 meter-high tower called Kamomyojin no Gorinto. On the base, a square, circle, triangle, crescent, and circle are piled up, and each symbolizes earth, water, fire, wind, and void, respectively.

There is also a bell tower that is registered as a tangible cultural property along with the main temple, and a Hundred-Jizo Temple that holds many Jizo statues (protectors of travelers and children).

In addition, there is a treasure house that has a Yurei Ema (ghost painting). This is a small, wooden plaque with a painting of a young woman who tragically died. The treasure house is not always open to the public, but it is open for viewing around the 22nd to the 24th of August each year.

When you are done paying homage, head over to the stamp building located on the left side of the main temple to collect your stamp!

Since this temple is the first stop on this Miyako Shichifukujin pilgrimage, we picked up a Daigofu (stamp board), too. There are various kinds of stamp boards, as well as stamp books for the pilgrimage and a hanging scroll. For this time, we bought a stamp board that cost 2,300 yen. This includes the first stamp, the Jurojin stamp, which was placed in the middle of it.

Gyogan-ji is also part of another pilgrimage, the Saigoku Kannon Pilgrimage, and you can get the stamp for that too. This pilgrimage takes you around 33 temples throughout the Kansai area. If you are interested, look into other pilgrimages in Japan while you're at it!

Other than that, you can also buy lucky charms for traffic safey and longevity as well (500 yen each).

We hope you enjoyed the first part of the Miyako Shichifukujin Meguri series! Next up is Manpuku-ji in Uji, Kyoto, which is dedicated to the deity Hoteison.