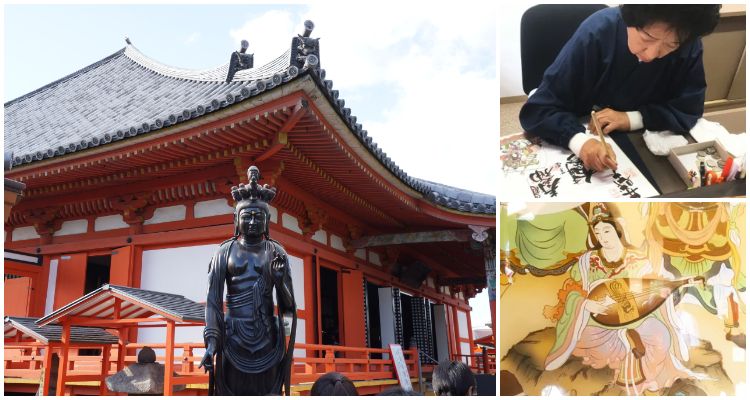 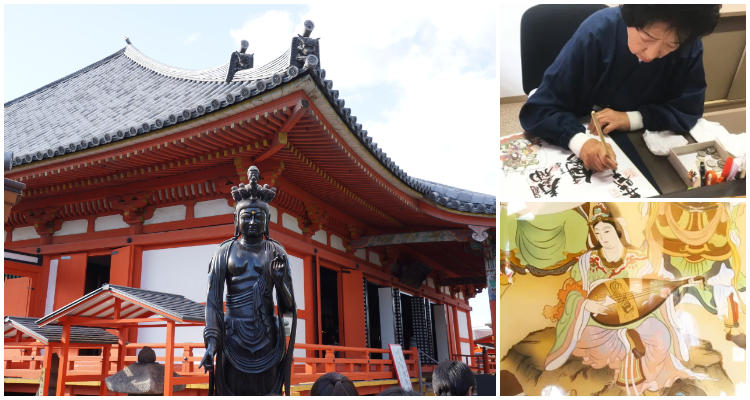 The Miyako Shichifukujin (Seven Lucky Gods Pilgrimage) is a popular pilgrimage in Kyoto that anyone can complete during a holiday to Japan. To do it, you need to visit the seven shrines and temples of the Seven Lucky Gods and collect a special calligraphy stamp for the deity enshrined at each stop. The stamps are called "gohoin," and collecting all seven is said to bring blessings and happiness. In this series, local college students take you on a journey through the Miyako Shichifukujin pilgrimage and report on all the must-see sites at each location! In part four, we take a visit to the Rokuharamitsu-ji Temple in the popular sightseeing area of Higashiyama.

Rokuharamitsu-ji Temple (officially Fudaraku-sen Rokuharamitsu-ji) is located in Higashiyama, a popular area of Kyoto best known for the Yasaka Jinja Shrine and Kiyomizu-dera Temple. This temple is one of the sites of the Saigoku Kannon Pilgrimage, a pilgrimage of thirty-three sacred Buddhist temples dedicated to the deity Kannon that are located throughout the Kansai region of Japan. In the mid-12th century, the powerful Heike samurai clan based their residence in this area, having owned a vast property with over 5,200 mansions at the peak of their prosperity.

The temple came under attack at the decline of the Heike, when everything but the Hon-do Hall (Main Hall) burned in a fire. The temple has seen numerous fires since then, but thanks to those in power, the temple has been generously renovated over time. The temple stands today in its vermilion glory, reminiscent of the days gone by.

The Rokuharamitsu-ji Temple was established in 951 by Kuya Shonin, referred to as an "ichi-hijiri" (saint of the marketplace), who crafted and enshrined the Standing Wooden Kannon of Eleven Faces as its principal image. It is said that Kuya successfully fended off a plague by mounting this Kannon statue on wheels and walking through the city offering medicinal baths to the ill. The treasured statue is a Natural Treasure of Japan and is shown to the public every 12 years, with the next scheduled viewing in 2024.

The temple houses many other valuable wooden statues from the Heian (794 - 1185) and Kamakura (1185 - 1333) periods, such as the Standing Wooden Statue of Kuya Shonin. You can find this within the temple's Hall of Treasures.

Benzaiten is the only female god of the Seven Lucky Gods. She originated from the Hindu water goddess Saraswati, but is what is known as a "syncretic entity," which means she has both Buddhist and Shinto influences. A popular deity with numerous locations of worship dedicated in her honor throughout Japan, Benzaiten is believed to have multiple powers, especially in the fields of language, arts, money, and wealth.

There are two images of Benzaiten at the Rokuharamitsu-ji Temple. The first statue is enshrined in the Benzaiten-sha Shrine, the first building you'll see upon entering the precincts. Pictured at the right is the Fukuju Benzaiten, a golden statue where she holds her signature biwa, a traditional Japanese lute.

The other image is the Zeniarai Benzaiten (Coin Washing Benzaiten), which sits to the right of the Hon-do Hall when you are facing it. It is believed that washing your money with the water in front of the statue and keeping the money as a good luck charm will increase your luck with wealth. The procedure is easy. First, put the money in the straining basket. Then, scoop the water with the dipper and purify the money by pouring the water over it three times.

Purchase an omamori-bukuro, or charm pouch (500 yen), in which to keep the purified money, and you are all set!

Sites of Interest Within the Temple Grounds

The first things to catch your eye as you enter the precincts are the replica of the principal statue of the temple and the stone pole called Ichigan-ishi (Wish-Fulfilling Stone), which is erected next to the replica.

On the pole is the inscription of the temple name, Rokuharamitsu-ji. Above the inscription is a stone tablet on which a Siddham script is engraved. It is believed that if you make a wish while turning the stone tablet in your direction three times, the Kannon will fulfill that wish.

Above is the Nade Ushi (Rubbing Cow). If you have pains or ailments, rub the corresponding parts of the cow’s body to alleviate them.

There are various other locations within the precincts where you can receive blessings. For instance, next to the aforementioned Zeniarai Benzaiten, there is a Mizukake (Water Splashing) Fudoson, which is believed to fulfill your prayers of increasing your luck at winning.

Let's Get Our Gohoin Stamp!

After touring the precinct, it is time to receive our gohoin stamp! The goshuin-jo (stamp desk) is in the same hall as the Zeniarai Benzaiten. You can witness some swift calligraphy skills as your board is stamped with the mark of Benzaiten.

The newest addition to the collection is at the top left. The shikishi board for stamps has become even more decorative with four out of seven stamps collected. In addition, at this temple, the extravagant fan on the right, Kissho Suehiro (2,000 yen), is also available for collecting the Shichi-fukujin stamps.

There are many other souvenirs available, including an original goshuin-cho, a stamp collection book (1,500 yen), and a Seven Lucky Gods charm (700 yen). The temple's own incense, Rokuharamitsu-ko, is also enchanting!

And that's a wrap for the fourth part of the series. Our next destination is the Ebisu Jinja Shrine, located not far from the Rokuharamitsu-ji Temple, where the deity Ebisu is enshrined.