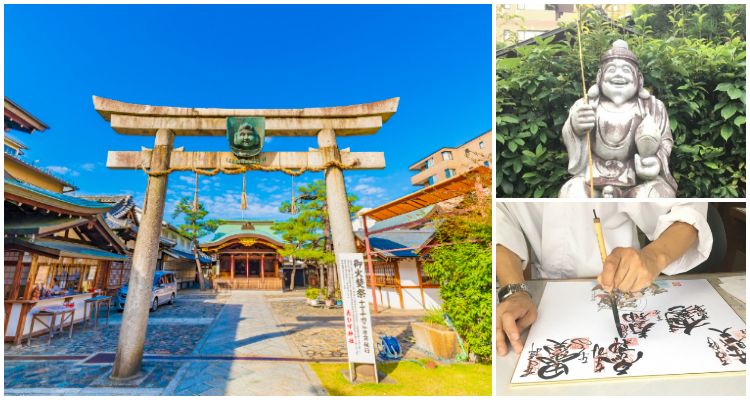 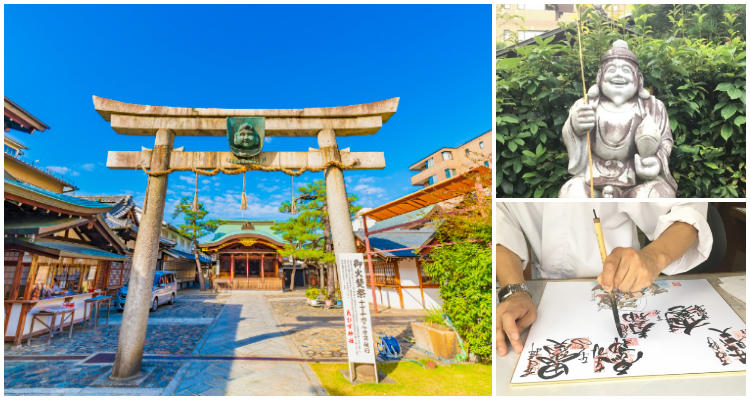 The Miyako Shichifukujin (Seven Lucky Gods Pilgrimage) is a popular pilgrimage in Kyoto that anyone can complete during a holiday to Japan. To do it, you need to visit the seven shrines and temples of the Seven Lucky Gods and collect a special calligraphy stamp for the deity enshrined at each stop. The stamps are called "gohoin," and collecting all seven is said to bring blessings and happiness. In this series, local college students take you on a journey through the Miyako Shichifukujin pilgrimage and report on all the must-see sites at each location! In part five, we're visiting Ebisu Jinja Shrine in Higashiyama!

What Is the Ebisu Jinja Shrine?

Ebisu Jinja Shrine is located right next to Kennin-ji Temple in the Higashiyama area of Kyoto. The histories of the two temples are tied: Ebisu Jinja was built in 1202 to enshrine the guardian deity of Kennin-ji, and the two were established by the same monk—Eisai Zenji, the monk who is credited with bringing the Rinzai school of Zen Buddhism to Japan, as well as green tea.

When Eisai was on his way to China, he is said to have encountered a furious storm that threatened to shipwreck him, but he was saved when the deity Ebisu appeared above the sea, calming the storm. Eisai’s reverence remained fervent, so Zennin-ji's Kaisando building (built to commemorate its founder and house his remains) directly faces Ebisu Jinja Shrine, according to his wishes.

This shrine is revered throughout Japan and is one of the three main Ebisu shrines in Japan, standing alongside Nishinomiya Jinja in Nishinomiya (Hyogo Prefecture) and Imamiya Jinja in Osaka. Kyoto locals affectionately refer to the shrine as "Ebessan." Every year on January 8th - 12th, the Toka Ebisu festival is held here. During this time, a large number of worshipers visit the shrine, making it extremely lively.

Many Japanese people associate Ebisu with the "Shobai Hanjo no Sasa" (bamboo bringing business prosperity), and this was originally something specific to Ebisu Jinja. Bamboo plants grow straight and are green all year round, so they are seen as a symbol of family fortune and business prosperity. This belief spread throughout Japan, and they are now a common lucky item.

Ebisu Jinja was also the first shrine in Japan to sell cellphone straps as protective charms. Every year, they also sell ema (wooden plaques on which you write your wishes) with hand-drawn images. This really is a shrine that's overflowing with creative ideas!

Out of the seven deities of the Miyako Shichifukujin pilgrimage, three have Chinese origins and three have Indian origins. The only one with Japanese origins is Ebisu. He is known as the deity of prosperous business and is worshiped all over Japan, especially in the Kansai region, where this shrine is located.

Despite his fame, his origins are somewhat unclear, and several different theories exist. At Ebisu Jinja, Ebisu is seen to be the same as Yaekotoshironushi no Ookami, the child of Okuninushi no Mikoto, the main deity worshiped at Izumo Taisha Shrine. Ebisu is a deity closely related to water, so a fishing rod and sea bream are his trademarks. He is known to ensure safe travels, especially at sea, and a good catch for fishermen.

Interesting Areas in the Shrine

Ebisu is known for having some unusual features. Take a look at the shrine gate and the fukumi (auspicious decoration) that hangs on it.

This fukumi features the likeness of Ebisu on a bamboo rake, and it is said that your wish will come true if you throw a coin and it lands in the rake. Even the chief priest does not know the origins of this practice, but even so, many worshippers still continue this practice to this day. However, it is prohibited during the Toka Ebisu Festival, as it can get dangerous due to the large number of visitors to the shrine.

This is the main shrine where Ebisu is worshiped. Normally, when you visit, you pray to the deity in front of the main shrine. Here, you should instead go to the left side and knock a panel there when you pray.

The origin of this practice is also unknown, but one explanation is that Ebisu is an elderly deity who is hard of hearing. In order to have your prayers heard, you'll need to knock on the panel and get his attention. Do take care not to knock too hard, as it can damage the panel. Think of it as giving Ebisu a gentle tap on the shoulder!

This is the name card and wallet box. Donated by Konosuke Matsushita and Magosaburo Yoshimura (famous names in the world of finance in Japan), it is meant to be a repository for old business cards and wallets.

Elsewhere in the shrine grounds, you will find Iwamoto Honsha Shrine, where Ariwara no Narihira (825-880), a famous poet from the Heian period (794-1185), is worshiped. There is also the Komatsu Tenmangu shrine, where the deity of learning, Sugawara no Michizane (845-903), is worshiped.

Get Your Hands on the Gohoin Stamps!

After you're done worshipping, head to the shrine office to collect your gohoin stamp! They will complete the calligraphy right before your eyes.

The stamp from Ebisu Jinja Shrine is in the middle of the top row. Just two more stamps left to complete the collection!

One of the charms of this shrine is the number of creative and original souvenirs available. Pictured on the right is the Ebisu Koban Omamori charm (500 yen). This will help bring good business, fortune for the family, guard against misfortune, and bring good luck.

There are also mini souvenir versions of the fukumi and rake at the shrine entrance (1,000 yen), which are also popular items. There are many other souvenirs like protective charms, fortune slips and more to pick from!

How does this fifth stop on the Miyako Shichifukujin sound to you? The next stop is Sekizan Zen-in Temple, located right next to Shugakuin Imperial Villa, where Fukurokuju (the deity of happiness, wealth and longevity) is worshiped.