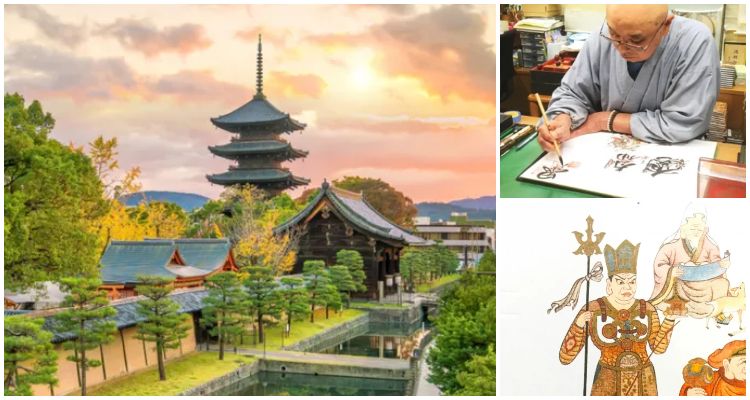 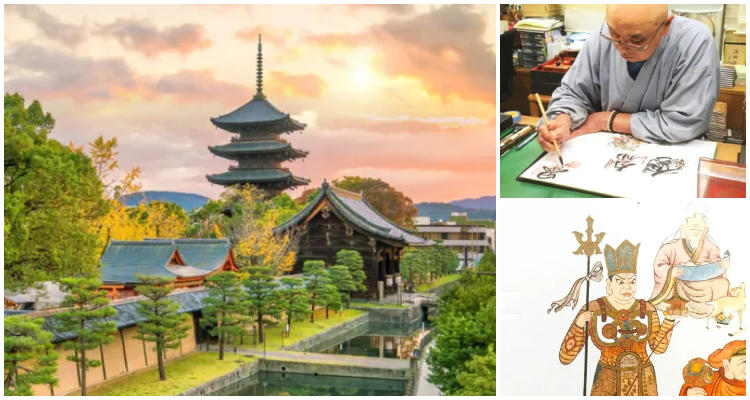 The Miyako Shichifukujin (Seven Lucky Gods Pilgrimage) is a popular pilgrimage in Kyoto that anyone can complete during a holiday to Japan. To do it, you need to visit the seven shrines and temples of the Seven Lucky Gods and collect a special calligraphy stamp for the deity enshrined at each stop. The stamps are called "gohoin," and collecting all seven is said to bring blessings and happiness. In this series, local college students take you on a journey through the Miyako Shichifukujin pilgrimage and report on all the must-see sites at each location! In part three, the students visit Toji Temple (also known as Kyoo Gokoku-ji Temple), which is most famous for its Five-Storied Pagoda!

Toji Temple, located near Kyoto Station, is an ancient temple that was first established around 1,200 years ago. It is a designated World Heritage Site and one of the leading tourist attractions of Kyoto, possessing 23,740 National Important Cultural Properties from 55 different categories and 81 National Treasures from 25 different categories, including the world-famous Five-Storied Pagoda called the "Goju-no-To."

The state-sponsored temple was built to protect the city after the capital was moved to Kyoto, which was then known as "Heian-kyo." However, in 823, it became the first Mikkyo (or esoteric) Buddhist temple in Japan after it was bestowed upon Kukai (also called Kobo Daishi), a famous monk who studied esoteric teachings in China and spread them in Japan. Since then, Toji Temple has flourished as the headquarters of the Shingon Mikkyo sect under the teachings of Kukai.

The entrance to the temple grounds is free; however, admission fees are required to enter the Kon-do Hall and the Ko-do Hall. Please also note that the public viewing of the Homotsukan (Treasure Hall) and other buildings are limited to certain periods and require a separate admission fee.

Unauthorized photography is strictly prohibited inside the halls. Areas housing Buddhist statues are sacred grounds of the temple, so please mind your manners and refrain from talking loudly during your visit.

Within Toji Temple's grounds is Bishamon-do Hall, dedicated in honor of Bishamonten, the Buddhist deity of protection and one of the Seven Lucky Gods.

Bishamonten is also considered to be the equivalent of the deity Tamonten, one of the guardian Four Heavenly Kings (Shitenno) of Buddhism who rule the northern quadrant of the world. Bishamonten originated from a figure in Hindu mythology called "Kubera," the Lord of Wealth. After being passed through Central Asia to China, the warrior god aspect was added to his character. This is why the Japanese version of the Bishamonten is often represented in the style of a warrior of China's Tang Dynasty period (618 - 907), clad in leather armor.

To-ji Temple houses the Tobatsu Bishamonten, a National Treasure. However, this is a special manifestation of the more familiar Bishamonten. This Bishamonten has a bit of a foreign appearance, wearing chain armor and supported by a female earth deity and two demons at his feet.

His statue was originally enshrined in the Rajo-mon Gate at the entrance of ancient Kyoto to protect and watch over the capital. It was moved to Toji Temple after the Rajo-mon fell to ruin, and he has since been worshipped as the god of wealth and good fortune.

The statue is currently enshrined in the Homotsukan (Treasure Hall) at Toji Temple and is available for public viewing twice a year in the spring and fall seasons.

There are numerous other valuable treasures of Japan exhibited in the Homotsukan, including the Standing Statue of the Thousand-Armed Kannon Bosatsu (Goddess of Mercy), so make sure to pay a visit when you have the opportunity.

Sites of Interest on the Grounds

There is just so much to see on the spacious temple ground, which runs a length of 255m from east to west and 515m from north to south. The first stop is the Five-Storied Pagoda, another National Treasure. This is the tallest wooden structure in Japan, standing roughly 55m tall. It dates back to 825, when it was first built by Kukai, but has burned down repeatedly over the years. The present pagoda was constructed in 1644 and is the fifth to be erected.

In Buddhism, the pagoda originally served to enshrine the ashes of the Buddha. It is said that the Five-Storied Pagoda of Toji Temple houses the ashes that Kukai brought back from China.

While the interior of the pagoda is normally closed for public viewing, the inside of the first level of the tower is sometimes open for special viewings.

Pictured above is the National Treasure Kon-do Hall. It was the first structure to be built after the establishment of Toji Temple and serves as the main hall of the temple. It was destroyed in a fire in 1486 and was rebuilt in 1603.

The images enshrined in the hall are together called the "Yakushi Sanzonzo" (Yakushi Triad) and are believed to protect and save people from various illnesses. 12 Heavenly Generals are positioned at the foot of the statue of the Yakushi Nyorai to protect it and to assure that the prayers of the people are heard. The ancient style of these statues is believed to be from the Nara period (710 - 794). While they were destroyed in a fire along with the rest of Kon-do Hall, the statues were restored under the direction of Busshi Kosho, a sculptor from the 16th century.

The Ko-do Hall, pictured above, was constructed by Kukai himself in 825 and is a designated Important Cultural Property. The original structure burned down in 1486, and the present Ko-do Hall has been standing since its restoration in 1491.

The precincts of To-ji Temple offer far too many interesting sites to mention, but let's not forget the Nandai-mon, another Important Cultural Property. The picture above shows how it looks!

After the tour of the precincts, it's time to collect the gohoin stamp! The stamp office is in the Jiki-do Hall located on the east side of the Bishamon-do Hall. Submit your shikishi (also called a daigofu), the decorative cardboard that serves as a good-luck piece, to the person at the desk, and your shikishi will be signed and stamped as you watch.

The goshuin seal for this stop is stamped at the top right. The big bold "毘" (Bi for Bishamonten) looks very cool.

Just short of the Jiki-do Hall is a shop where you can purchase souvenirs and other goods. There is such a wide selection of amulets and other gifts that it's hard to pick just one!

The store is stocked with many other items for purchase such as books, folders, and postcards as well as miniatures of the Buddhist statues. They also offer souvenirs like snacks and pickled foods.

What did you think about the third part of this series? Our next destination will be the popular Higashiyama area, the center of Kyoto's tourist attractions, where we will pay a visit to the Benzaiten enshrined at the Rokuharamitsu-ji Temple.