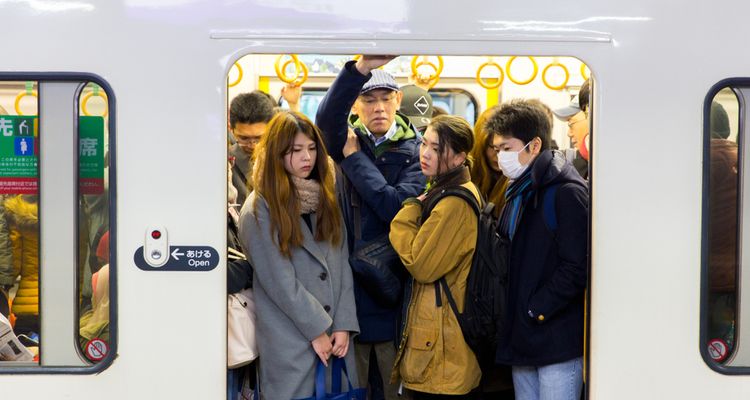 Have you ever had a scary experience of riding a jam-packed train in the morning when traveling in Japan? Even if the train is already full of people, passengers on the platform would still try to get in and the train conductors would keep pushing people in to shut the doors. Foreigners are often dumbfounded by this sight. Local commuters can hardly get onto the train, not to mention tourists carrying all the bags and suitcases. In this article, we will talk about the commuting rush hour and the most crowded train lines within the greater Tokyo area, so that you can avoid them and have a smooth and safe journey.

The commuting rush hour is the part of the day during which crowding on railways, buses and roads is at its highest. The morning commute to work or school tends to be more severe, while the evening peak is slightly better, as everyone gets off work at different times.

The evening rush hour runs between 5:30 pm - 7:30 pm. From 4:00 pm, the number of commuters gradually increases as people start to leave the office, and after 9:00 pm, the crowd becomes less concentrated again.

There are a total of eighty-three train lines in the capital region of Japan, and the number of passengers varies from route to route, so it does not necessarily mean you will find an empty train during non-peak hours. For example, for the trains running between Tokyo's suburban areas and city center, the rush hour period begins as early as 6:00 am, and after 10:00 pm the trains are still so full of passengers that you can hardly find a seat even on the last train. Before we look into the most crowded train lines, let's talk about the "congestion rate" first.

What Is the “Congestion Rate”?

The congestion rate is calculated by dividing the number of passengers by the carrying capacity. The lower the rate, the more space passengers have inside the train and the more comfortable the ride is. Therefore, in order to provide passengers with a comfortable ride, major railway companies continue to make huge investments every year in expanding train routes, increasing the numbers of trains and carriages, shortening the time interval between trains, and even expanding the platforms and improving electric signaling equipment.

Let's take a look at how the congestion rate affects tourists:

100%: Full passenger capacity. Every person is able to sit or stand and hold onto a handgrip or handrail.

150%: Passengers are standing shoulder to shoulder, and are still able to spread and read newspapers.

180%: There is some physical contact but passengers can still use their phones.

200%: The train is quite cramped with passengers standing with the back pressing against the front. They can barely use their phones.

250%: Not only are passengers standing with the back pressing against the front, they are also forced to stand at an awkward angle and cannot move their limbs. They won’t fall even when the train sways.

From this explanation, keep the numbers in mind as we look through some of the most congested train lines within the greater Tokyo area.

Because of how comprehensive and convoluted the Japanese train system can be, we've prepared multiple guides to help you master it! This comprehensive guide helps you figure out the various railroads throughout Japan, while this guide teaches you the etiquette of riding trains.

The 11 Most Crowded Lines in the Tokyo Metropolitan Area

According to the Ministry of Land, Infrastructure and Transport, there are a total of eleven train lines within the capital region whose congestion rates exceed 180%:

Ranked first is the Tokyo Metro Tozai Line, which starts at Nishi-Funabashi Station in Chiba and passes by important interchange stations like Nihombashi and Otemachi (Tokyo Station). It is one of the main routes for Chiba residents commuting to Tokyo. The train is so over-crowded that a train window was broken at rush hour due to the pressure of all of those heaving bodies.

The Most Frequently Delayed Routes in the Greater Tokyo Area

Most trains in Japan are very punctual, but during the commuting rush hour, there may be delays due to various reasons: train doors are unable to close as too many passengers try to squeeze into the train, a passengers fell onto the track, or the train schedule was too tight and needed to be rescheduled. According to the 2017 report released in 2019 by the Ministry of Land, Infrastructure and Transport, by calculating the number of days where “delay certificates” filed over the average month (which they defined as twenty working days), the ten train lines that are most frequently late on arrival and departure are:

For convenience, many train lines within the greater Tokyo area are connected and interchangeable. However, this also means that when line A is sometimes disrupted due to an incident, lines B, C and D will also be affected. Aside from accidents caused by human errors, natural disasters such as torrential rains, typhoons and earthquakes can also cause malfunction, delay or even suspension on train service. It is therefore recommended to check the weather forecast or train service update online whenever necessary.

There are delays to trains in the capital region every day. This not only affects local commuters; tourists may also miss a flight or bullet train they are supposed to catch and the sightseeing activities they have booked. It is advised that you arrange your itinerary to avoid the commuting peak hour, and if unfortunately you cannot do so, it is always a good idea to reserve some extra time for your travel.