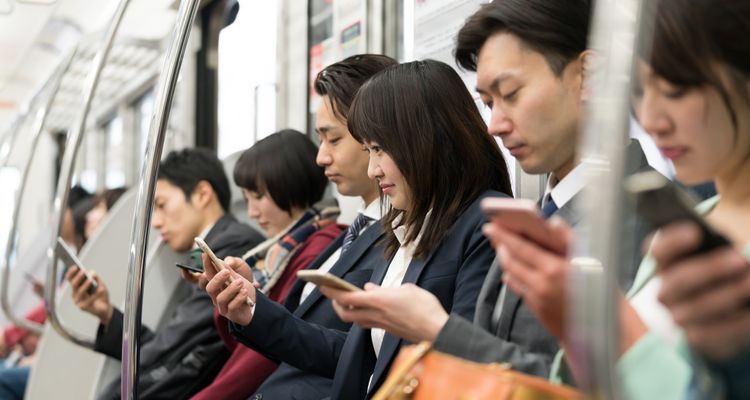 10 Things to Know When Riding Trains in Japan

Japan is known for its extensive and modern high-speed transportation system and infrastructure, which makes traveling around Japan extremely convenient. Like many countries, there are numerous unspoken rules in Japan that are deeply ingrained in the society, and many of these apply when riding the trains. Some of these may vastly differ from your own country, so it may prove to be very useful to know the social norms surrounding trains in the country you're visiting. Read on to learn about 10 things to know when riding trains in Japan!

1. Getting On and Off the Train

First, we'll start with basic train etiquette when getting on and off the train. In Japan, when waiting to get on the train, you line up in two orderly rows in front of the train doors. When the doors open, the lines split off to the left and right, and you wait for passengers to get off before getting on. No matter the situation, it is considered good manners to wait until everyone gets off first before you board. Also, when the train is crowded, those standing right next to the doors should step off the train at each stop to let other passengers out before getting back on again. If you're standing by the doors when it's not crowded, be considerate and stand either on the left or right side, or move further into the train so that you aren't a hindrance to those getting off the train.

2. Refrain From Talking in Loud Voices on the Train

When you're on the train, speak quietly and try to keep conversations to a minimum. If you speak in a loud voice or listen to music at a loud volume, you'll cause trouble for those around you. Since you're sharing this public space with others, it's good manners to be considerate of your surroundings. While you may see Japanese people talking on the trains, you'll notice that they take extra care not to speak loudly so as not to bother others around them. Of course, loud conversations are seen as outrageous and you should refrain from having conversations about strange topics that others won't want to listen in on. You should try to be quiet on the train until you reach your destination.

3. Set Your Phone to Silent Mode and Don't Speak on the Phone

It's also considered good manners to refrain from talking on the phone when you're riding the train. You should turn your phone on silent mode before getting on the train, and even if you get a phone call, you shouldn't pick it up.

Even in times of emergency, it's best if you wait until the next stop to get off before calling back from the station platform. If it's absolutely unavoidable, a few seconds on the phone can be overlooked, but even then, you should cover your mouth and be extra careful to speak in a low voice.

4. Be Considerate of the People Sitting Next to You

Most train seats in Japan can fit up to 7 or 8 people, and they might feel slightly more narrow than trains in other countries. However, keep in mind that you absolutely should not take up several seats by yourself or sit in a manner that might become a hindrance to others. Be mindful not to widely spread your legs or bend your legs into other people's personal space. Also be careful not to take up a seat with large luggage such as a suitcase; keep your belongings on top of your knees, directly in front of you, or on the baggage racks above the seats. The train is a public space that is shared by everyone, so make sure to be considerate of others!

5. Be Extra Cautious When Traveling with Large Suitcases During Rush Hour

The bigger the suitcase, the more necessary it is to exercise caution. You should especially be wary of the rush hour, which is from around 7:00 am to 9:00 am in the morning and 5:00 pm to 7:30 pm in the evening, especially around large cities like Tokyo and Osaka. The congestion rate can go up to 200% during peak hours, and you should expect the trains to be jam-packed full of commuters. If you have a large suitcase or bag with you, it need not be said that this will likely cause problems for others on the train. If you're standing by the doors, you'll have to get on and off numerous times, and if you have a backpack with you, you should hold it in front of you to reduce any distractions to those around you. If possible, it's a good idea to avoid these hours when traveling around the city with luggage.

6. Don't Eat or Drink on the Train

Depending on the country, rules regarding consuming food or drinks on the train may vary, but it's considered bad manners in Japan because any spillage or food smells may be a source of irritation for others. Generally, eating and drinking on the trains in Japan is prohibited, with the exception of shinkansen (bullet trains). Just remember that, while it's not allowed on normal train lines, you can dig into a meal or drink a beer on shinkansen; as long as you get that down, you should be just fine!

7. Don't Walk Around While Looking On Your Phone

Walking while on your phone is a huge social issue within Japan as of late. There have been many fatal accidents as a result of this in train stations. Walking while looking at your phone, whether it's to look at the map or play games like Pokemon GO, is extremely dangerous. Using your phone in itself is completely fine, but being so absorbed in the phone screen that you stop paying attention to your surroundings is where the problem really lies. Be extra careful not to use your phone while walking in the station or on the train platform.

Even though Japan is perceived as a safe country, you shouldn't let your guard down. One of the biggest problems Japan has dealt with for a long time is molestation cases on escalators in stations and inside trains. You should be particularly careful when it's crowded. There is also the danger of theft, as someone may steal valuables from your backpack or pockets, and even take your entire suitcase! Be sure to keep your bags with you at all times, and carry your backpack in your arms.

On transportation services in Japan, there are areas set aside solely for women. These women only areas can be found on trains as well as buses and taxis. This system, in which a part of the train is made "women only" during certain periods of the day like the morning rush hour, was introduced in an effort to countermeasure against molesters on public transport. While men aren't prohibited by law from riding on these cars, it goes without saying that it's considered bad manners. However, this doesn't apply to young children, passengers with physical needs, or any accompanying persons of the two.

There are also priority seats on trains for the elderly, expectant mothers, and those with physical needs. You'll be able to easily spot these seats by the "Priority Seat" sign with an illustration under it. While people's judgement on this may differ depending on the person, if any of the above people get on the train, you should give up your seat for them. If you ever find yourself in this position, you can say "どうぞ (do-zo)" to the passenger so that they will know you are giving them your seat.

Compared to other countries, proper etiquette for riding trains in Japan may seem a bit on the stricter side, but you know what they say: when in Rome, do as the Romans do! It's important to follow the customs and rules of the country you're visiting, so be sure to keep these 10 points in mind when you're traveling in Japan to have a comfortable and safe trip!