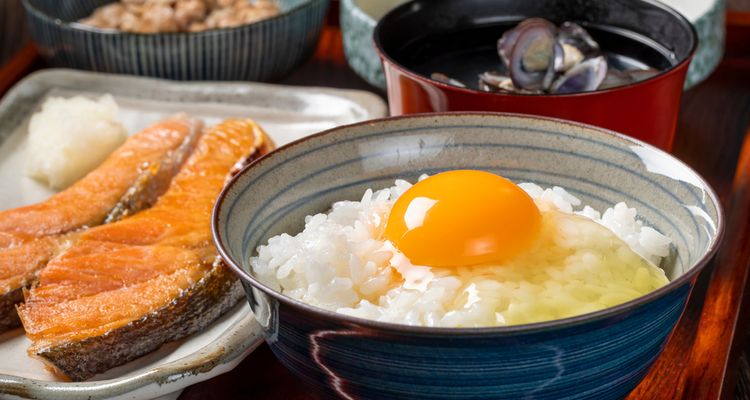 Have you heard of the acronym TKG? It stands for Tamago Kake Gohan, a staple Japanese food. Cheap yet delicious, tamago kake gohan is a great Japanese dish that is so simple, you can even make it at home. You may want to think twice about making it, though, unless you live in a country like Japan. Why? Because TKG contains raw egg! Read on to find out more about this dish and why it is safe to eat raw eggs in Japan.

What Is Tamago Kake Gohan?

Tamago kake gohan can be translated into English as “rice topped with egg." It is a simple but incredibly popular dish in Japanese cuisine that is usually eaten at breakfast, although it can be enjoyed at any time of the day. White rice, a raw egg, and soy sauce are all you need for this deceptively hearty meal. In recent years, tamago kake gohan has gained some notoriety outside of Japan from its depiction in the anime Gin no Saji (Silver Spoon). The dish has received a lot of positive and curious reactions from anime fans across the world, but one hangup that non-Japanese often have about TKG is the concern about how safe it is to eat raw eggs.

Is It Safe to Eat Raw Eggs? Japanese Egg Regulations

In most countries, it is normal to be concerned about eating raw eggs. The risk of salmonella poisoning from raw eggs is nothing to laugh at, with the average case causing stomach cramps, fever, and diarrhea lasting for four to seven days. Severe cases of salmonella can even be fatal, so why take the risk? Well, Japan, in its quest for culinary perfection, has devised methods to ensure a way of safely consuming raw eggs.

Thanks to strict procedures and regulations for egg production in Japan, the chance of contracting salmonella from eating an egg is close to nil. The sanitary regulations for Japanese chicken farms are more stringent than in many other countries, Japanese chicken farmers wear more protective gear when entering the coop, and extra precautions are taken to prevent the chickens from coming into contact with sources of contagions such as wild birds, insects, and other animals. This leads to a much lower chance that the chickens themselves become infected with salmonella and therefore reduces the risk of it passing on to the egg.

On top of this, once the eggs are collected, they are thoroughly tested. Each egg is run through a machine that individually washes, sterilizes, and checks for potential issues such as cracks, dirt, or blood spots. The machines even scan the eggs for any traces of bacteria, and eggs with imperfections are discarded. The eggs are then immediately shipped to stores, so that they will be consumed when still extremely fresh. In Japan, eggs are treated as though they will be consumed raw, so the expiration date is typically set to only 2 weeks after processing. This is much shorter than in many other countries and is another measure to ensure that the eggs will be eaten while fresh. (Incidentally, it is nowadays considered safe to eat raw eggs in the U.K and raw eggs that have been pasteurized in the U.S.)

How to Make Tamago Kake Gohan

As delicious as tamago kake gohan is, the method for making it is very easy and basically only requires three ingredients, although there are many popular variations (more on this to come). Simply take your cooked Japanese rice in a bowl, and make a little room in the center to place the egg. Crack the egg in a separate bowl, as this will make it easier to remove any bits of shell, and pour the egg onto the rice. Finally, add some soy sauce to your liking, and mix the whole thing into a fluffy and delicious treat.

Some people prefer to beat their egg and add the sauce in a separate bowl first, as it makes it easier to evenly distribute the egg over the rice. Others prefer not to beat the egg at all. Still others like to discard the white and use just the yolk. In the end, it’s up to you, as there is not really a wrong way to add your egg.

One type of TKG that has been somewhat of a fad recently is called "fuwa fuwa" TKG (meaning "fluffy"). Fuwa fuwa TKG is made by whipping the egg whites into a meringue using an electric mixer to give the dish a foamy, light texture.

For diehard TKG fans who want to eat fuwa fuwa TKG all the time, the innovative minds at Takara-Tomy Arts came up with a machine that makes the perfect fuwa fuwa tamago kake gohan at the simple press of a few buttons (see the video below for a demonstration). Drop an uncracked egg into the top of the Ultimate TKG Tamago Kake Gohan Machine, press the top, and watch as the machine perfectly splits the egg, separates the yolk from the white, and whips the egg white into a fluffy, delicious meringue.

Simple TKG made with egg, rice, and soy sauce is definitely the most popular version of this dish, and the Japanese are so crazy about tamago kake gohan that there are even many soy sauces made specifically for TKG! However, there are many popular variations as well. Some people prefer to use mentsuyu (concentrated noodle broth) instead of soy sauce, and there are many popular toppings that are commonly added to the dish to give it an extra punch. The following are a few classic additions to tamago kake gohan.

A simple step up from the basic tamago kake gohan, sprinkling TKG with "furikake" (Japanese flavor sprinkles) lends that little extra flavor to the dish. There are many different kinds of furikake, but a classic that goes well with TKG is "aonori" seaweed. Just adding a little furikake can do a lot to bring you a whole new TKG flavor experience.

With its strong smell and gooey consistency, "natto" (fermented soybeans) is said to be an acquired taste. However, once you get used to it, natto is also sure to become a habit! A pack of natto will almost always come with little packets of mustard and soy sauce, which can replace the soy sauce that would normally be added to TKG. It is said that you should stir the natto 20 times to the right and then 20 times to the left to mix it up just right. Eating natto with rice is a classic, but adding it to tamago kake gohan might be an even more delicious option. Be forewarned, the egg and natto together make this dish extra gooey, but oh so good!

This is another topping that some non-Japanese may be hesitant about, but are sure to warm up to after tasting it. "Katsuobushi" (dried bonito fish shavings) is an umami-filled topping that is used in a variety of Japanese dishes. Sprinkle some on top of your TKG for a smoky, savory flavor that wonderfully complements the egg and rice.

"Shirasu," the tiny white fish shown in the bowl above, are a type of whitebait (immature fish) that is easy to find in any Japanese grocery store. They are a popular topping for many Japanese dishes, including tamago kake gohan. Shirasu are very healthy and contain lots of calcium and potassium, in addition to being rich in RNA, which helps with cell regeneration!

Where to Eat Tamago Kake Gohan in Tokyo and Osaka

Now that we know that eggs in Japan are not only safe to eat raw, but also have a great number of delicious additional flavor options that make TKG a meal in and of itself, let’s take a look at a few tamago kake gohan specialty restaurants in two of Japan’s major hubs, Tokyo and Osaka.

If you are looking for a high-quality TKG experience in Tokyo, Kisaburo Nojo might be the best place to start. Famous for its high quality, specially selected eggs, Kisaburo Nojo provides the very best in all its chicken and egg-based menu items. TKG menu items range from 550 yen for a single egg, to 1,200 yen for an all-you-can-eat option! There are many different egg options on the menu including special eggs like herb eggs, rice eggs, and citrus eggs, which are produced by chickens that were fed these items as food.

Uchino Tamago is a restaurant located in Akasaka that showcases the super high-quality eggs from the restaurant’s farm in Kyushu. The TKG set here costs 560 yen and allows you to select your own egg. In addition, there are multiple kinds of soy sauce to choose from, making it a place you will want to return to again and again. Oyako-don (rice bowl dish with chicken and eggs) is an option on the menu here as well.

If you are traveling around Kansai or are in the Osaka area, Bimiu is the place to go for tamago kake gohan. This TKG restaurant is so good, it has been featured in gourmet food programs on TV and in foodie magazines! The basic TKG set here comes with miso soup and costs between 500 and 600 yen, depending on what kind of egg you select. If you are feeling like something more filling, you can opt for the TKG set that comes with karaage (deep fried chicken) as well. Be careful of the time though, because their hours of operation are limited to lunch only.

Before we wrap things up, there are a few other easily-accessible options for those searching for tamago kake gohan, but they are not specialty restaurants. Most of the popular gyudon (beef bowl) fast-food chains such as Yoshinoya or Sukiya have the option to add an egg to their beef bowls, which goes very well with the TKG flavors. These chains are located nationwide and can easily be found in major cities.

Finally, it should also be noted that most hotel breakfast buffets will have all three items needed to make TKG yourself. If you are staying at a hotel with a breakfast buffet, why not try making your own TKG for breakfast?

Hopefully this article has shed some light on the greatness of tamago kake gohan and helped alleviate any hesitation you may have had about trying this relatively hidden gem. Next time you are in Japan, be sure to try this dish for yourself. Before you go, consider reading up on 50 other foods to try while in Japan.