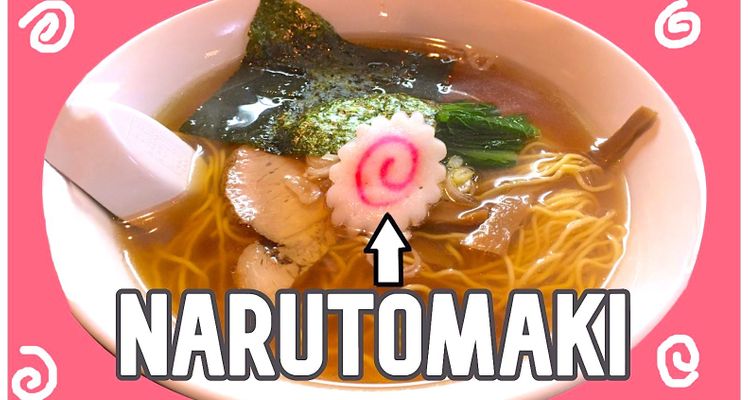 Narutomaki - The Fish Cake in Ramen With a Mysterious Pink Swirl

Narutomaki. You'll find it delighting a bowl of ramen, its distinctive pink swirl immediately grabbing your attention. The slightly chewy texture and bright colors of the fish cake make it an odd addition to the more muted tones of ramen. What exactly is this strange food, and why is it often found in a bowl of ramen? In this article, we’ll lift the veil from the fish cake called narutomaki and introduce it’s origins, how to make it, and why exactly it is a ramen topping.

It’s happened to everyone before. You’re eating a bowl of ramen, maybe at a new place, and you find something interesting, or strange, in your bowl. Ramen is a great dish because of how easy it is to experiment with the base recipe, and any number of things can be added to create a unique flair. What this means is you’re just as likely to come across an amazing addition as you are an unusual one. Narutomaki fits into both of these categories.

The food is famously puzzling, as unless you know exactly what it is (a steamed fish cake with pink food coloring), nothing in its form indicates what it's made of. “What does it taste like?” might cross your mind before you take your first delightful bite, its mild fishy taste matching the broth of the ramen perfectly. This answers the most important question but leaves you hanging with plenty of others.

What Exactly Is Narutomaki?

Narutomaki is most commonly found as a ramen topping, but it is also used in salads and soups, made into tempura, or even eaten as-is. Narutomaki is a kind of kamaboko, which are shaped fish cakes usually served as side dishes or accompaniments to the main course. There are many kinds of kamaboko, and they take on a great number of shapes, colors, and tastes.

At its most basic, kamaboko is made from deboned fish mixed with egg whites and salt. These ingredients are processed together into a puree, which is then flavored, shaped, and colored. Once ready, it is cooked through steaming, grilling, frying, or poaching. The great thing about kamaboko is that it exists as a perfect base, with a relatively mild fishy taste that can be tailored to match any dish. From sweet to savory, strong to weak, there exists a kamaboko for every occasion.

How Is Narutomaki Made?

Just like other kamaboko, narutomaki is made from a puree of white fish and egg whites. These two ingredients are combined and blended into a paste. From here, the process changes, and narutomaki takes its unique form. The fish paste is first separated into two halves. The first half is flattened out (usually on a sheet of plastic or bamboo) into a rough rectangle. This is the white base. The second half is dyed, using light amounts of red food coloring in order to achieve the distinctive light pink color that narutomaki is famous for. The colored paste is spread on top of the white base, with only the edges remaining uncovered. The two are then rolled into a log. This creates the distinctive pink swirl that sits at the center of every narutomaki and leaves ridges on the outside. The roll is then steamed to solidify the shape before it makes its way to your local ramen shop or grocery store.

Where Did It Come From? Why Is It Called Naruto?

Narutomaki has unknown origins. The first reference to narutomaki appears in the late 19th century, but it is written about as an established style of kamaboko. This implies its invention sometime earlier, though how much earlier remains unclear. Initially, it was popular as a topping for soba (Japanese buckwheat noodles), but didn’t achieve national prominence in Japan until it found itself topping ramen.

Its name, however, is a little less mysterious. In southern Japan, there is a small channel of water in between Awaji Island (which sits in the Seto Inland Sea) and Shikoku called the Naruto Strait. This strait is incredibly narrow at only 1.3 kilometers. When the tide moves water from the Pacific into the Seto Inland Sea, twice a day, it produces extremely fast currents, some of the fastest in the world. The moving water forms into many large whirlpools, the larger of which can be 20 meters in diameter and visible from passing boats. The food narutomaki was supposedly inspired by the shape of these whirlpools, the swirl of pink and white in the center of the fish cake representing the power and beauty of the water in the Naruto Straits.

I’ve Heard of Naruto Before, but Not as a Food?

It wouldn’t be surprising to find people who, when hearing about narutomaki, don’t think of the food but rather the manga/anime series Naruto. First published in 1997, the series follows the adventures of a young boy ninja who dreams of becoming the leader of his village. The manga (published in the magazine Weekly Shonen Jump from 1999 to 2014) and the following anime adaptation, were instant hits, becoming both the fourth best-selling manga series in Japanese history and as well appearing on the New York Times bestseller list on multiple occasions. When searching for “naruto food” or “naruto ramen” on Google, you’re just as likely to come across the pink swirl fish cake as you are fandom sites discussing the main character’s favorite dish.

Although the manga's eponymous main character is named Naturo, the story itself has little to do with the food naruto. The story goes that the creator of the series, Masashi Kishimoto, created the character over a bowl of ramen. He originally envisioned Naruto as a boy who desired to become an apprentice in a ramen shop, and therefore his name served as a cutesy reminder of his dream profession. Only later did the story and character evolve, with the ramen plot being dropped in favor of ninja antics, but the name remained and now serves as narutomaki’s greatest form of advertising (and misunderstanding!)

Why Exactly Is Narutomaki Used in Ramen?

Narutomaki existed well before ramen was introduced to Japan. While its exact origin is uncertain, by the late Edo period it was well known as a popular topping to soba (Japanese buckwheat noodles). When ramen was originally introduced to Japan by Chinese immigrants in the late 19th and early 20th century, it was known as “shina soba” or Chinese soba. With the immediate connection between the dishes, people found it natural to experiment, transferring toppings that worked well with the old soba to the new soba. Narutomaki meshed with the dish perfectly, and because of that, it stuck around as one of the go-to toppings once ramen went mainstream.

Where Can I Get Narutomaki?

Narutomaki can be found at just about any Japanese supermarket, in Japan or abroad. You’ll often find them pre-sliced in ready-to-make ramen packages, along with other pre-selected ingredients like chashu (roasted pork) and sliced negi (green onion) that make up a standard bowl of ramen. If you want the best of the best, though, a visit to the town of Yaizu in Shizuoka Prefecture is called for, as 90 percent of all of Japan's narutomaki is produced there. Visit one of the local souvenir shops such as Yaizu Sakana Kobo, and pick up a log or two of some of the best narutomaki to be found.

If you don’t find yourself near any Japanese supermarkets or fish cake shops, then it doesn’t take much to make it yourself at home. All you need are the base ingredients, white fish (remember to remove the bones!), salt, sugar, mirin, and egg whites; and a blender to puree them. It doesn’t take more than 30 minutes to create from scratch. For the actual steps, visit Messy Tiny Kitchen and check out their narutomaki recipe.

Give Narutomaki a Try

Now that you know more about what it is, narutomaki's use as a topping in a bowl of ramen should spark delight rather than mystery. The next time you find yourself in a ramen restaurant, keep our important ramen tips in mind and make sure narutomaki is one of your toppings of choice!