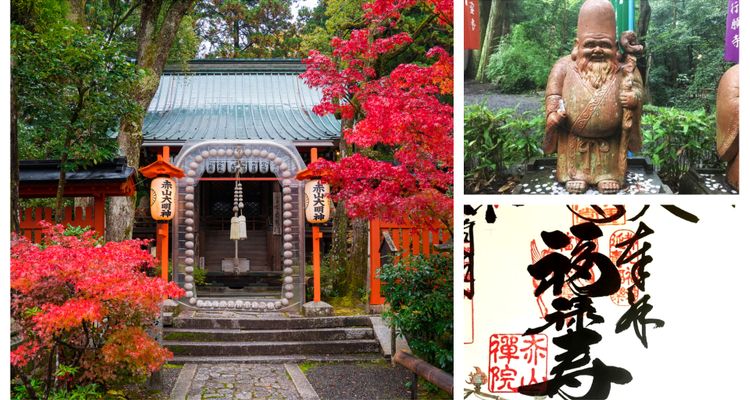 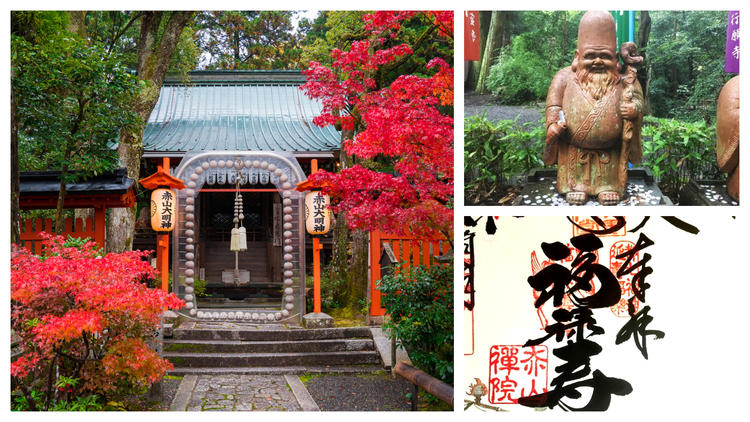 The Miyako Shichifukujin (Seven Lucky Gods Pilgrimage) is a popular pilgrimage in Kyoto that anyone can complete during a holiday to Japan. To do it, you need to visit the seven shrines and temples of the Seven Lucky Gods and collect a special calligraphy stamp for the deity enshrined at each stop. The stamps are called "gohoin," and collecting all seven is said to bring blessings and happiness. In this series, local college students take you on a journey through the Miyako Shichifukujin pilgrimage and report on all the must-see sites at each location! In part six of our series, a local Kyoto college student gives us a look at one of these seven lucky deities, Fukurokuju, enshrined at Sekizan Zen-in Temple!

The temple is one of the Enryakuji towers, and was built more than 1,000 years ago according to the will of Ennin, or Jikaku Daishi (794 - 864). It is characterized by the remarkable influence of "shinbutsu-shugo" (the fusion of Buddhism and Shintoism), with the temple looking like a shrine building.

Taizanfukun is also a deity who is worshiped as the ancestor of Onmyodo, or yin and yang philosophy. Sekizan Zen-in has been strongly influenced by Onmyodo. One of the effects is the statue of the monkey placed on the roof of the hall. Sekizan Zen-in is located to the northeast of the Imperial Palace, but according to Onmyodo, this is an unlucky direction believed to be where demons enter and leave from. The reason the monkey was placed here is due to the belief that monkeys have the power to remove evil.

You can see the statue of this monkey has been placed in a wire cage. This is not because it is under renovation, but because monkeys may rampage and cause mischief in the middle of the night if not contained!

Fukurokuju is one of the seven lucky deities from China and confers the three greatest desires of human beings: happiness, wealth, and long life. People pray to Fukurokuju for business prosperity, long life, health, and to prevent disaster.

Fukurokuju has a distinctive appearance with an elongated head, which makes him stand out among the seven lucky gods. Fukurokuju carries a cane, which symbolizes finding water sources and the location of precious veins in rock. Moreover, he is depicted in drawings as a figure followed by a crane and a tortoise, symbolizing long life.

Sekizan Daimyojin has a variety of faces, such as the previously mentioned Taizanfukun, Enma-o (king of the world of the dead), the guardian deity of the north-east, and the guardian of the Mt. Hiei Enryakuji temple, but he is also equated with Fukurokuju. In particular, people believe that Fukurokuju is in heaven, while Taizanfukun is in the ground, and thus govern the fate of all things.

When you have finished praying, it is recommended that you collect a gohoin (treasure) stamp at the gohoin office, located on the right-hand side of Fukurokuju-do!

So far in this series we have collected six gohoin, with one more remaining.

Besides gohoin, there are a variety of other things to collect at Sekizan Zen-in. This is omikuji (a paper strip with your fortune) with the figure of Fukurokuju. It looks very pretty, doesn’t it?

There are many types of omamori (lucky charms), such as the seven lucky deities omamori (for luck with money), and the omamori for protection from mischief.

Highlights of the Grounds

On the grounds of the Sekizan Zen-in, there are many other halls besides the main temple and Fukurokuju-do. Another of the main halls, Jizo Hall, is dedicated to Jizo-bosatsu. Jizo-bosatsu is known for the salvation of people and is enshrined in various parts of Japan. Jizo-bosatsu can also be the incarnation of Enma-o, which is deeply involved with Sekizan Daimyojin.

Along the way you will pass through two enormous juzu (rosaries).

The first juzu is called Shonen-ju, and the last is called Kannen-ju. You will decide on a wish when going through the Shonen-ju. While walking between the two juzu, you must consider whether the wish is really important, and something that you really want to achieve, and if so, you should go through the Kannen-ju while swearing to make an effort towards that wish.

We hope you enjoyed part six of the series! Next time is the final round where we visit Matsugasaki Daikokuten, the place of worship for Daikokuten.