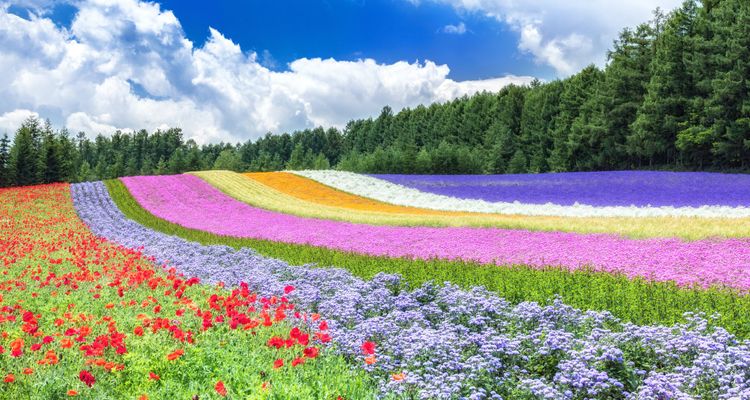 Everything You Need to Know About Hokkaido, the Ultimate Outdoor Getaway in Japan

Hokkaido - Japan’s northern front and the ultimate getaway for nature-lovers! From the Natural World Heritage Site of the Shiretoko Peninsula to the diverse plant life in the Kushiro Marsh, Hokkaido brims with natural phenomena seldom seen elsewhere. From climate to history, culture to geography, this article will cover everything you need to know about Hokkaido before visiting!

Encompassed by the Pacific Ocean, Sea of Japan, and Sea of Okhotsk, the island prefecture of Hokkaido is Japan’s northernmost landmass. Its roughly 83,450 km² area is 38 times larger than Tokyo and accounts for 22% of Japan’s total landmass, making it the country’s largest prefecture by a landslide.

The population of Hokkaido is roughly 5.38 million and accounts for 4.2% of the total Japanese population, making it the 8th most populous prefecture in Japan. Due to its enormous size, the population density is just 69 people/km², which is the lowest in Japan. Approximately 70% of Hokkaido’s landmass is forested, allowing for roughly 1 hectare of forest per resident.

To gain an understanding of Hokkaido’s size, the distance between the most northern point of Wakkanai and the southern city of Hakodate is roughly 630 km, which is almost the same as Tokyo and Okayama. East to west is equally formidable, with an approximately 500 km gap between Matsumaeko and Cape Shiretoko. Grasping the vastness of Hokkaido, especially when compared to the densely populated mainland, is extremely important when designing a realistic Hokkaido travel itinerary.

As most of Hokkaido is subarctic, the weather stays cool all year round. Winters are formidable, with days dropping as low as -20°C (-4°F). On the other hand, the high latitude ensures that Hokkaido dodges most of the typhoons and humid weather prone to mainland Japan, keeping the island refreshing in summer. There are rarely days that hit over 30℃ (86°F), and summer nights are usually below 25℃ (77°F). With a thorough understanding of Hokkaido’s climate, you can ensure you’ve packed right and are ready to enjoy it to its maximum potential!

The Regions of Hokkaido

Wedged between the Sea of Japan and the Sea of Okhotsk, Hokkaido’s northern regions are renowned for lush nature and untouched wilderness. Highlights include Japan’s northernmost sightseeing point of Cape Soya, Rishiri-Rebun-Sarobetsu National Park, Daisetsuzan National Park, and the picturesque hills and colorful flower beds of Biei.

Accounting for 30% of Hokkaido’s landmass, this expansive region covers the economic powerhouse of Sapporo, the historic pioneering port city of Otaru, and the popular resort areas of Niseko and Lake Toya. It is also the home of New Chitose Airport, the gateway to Hokkaido.

Doto consists of the northeastern Okhotsk area, the flourishing Tokachi farmland area, and the Kushiro and Nemuro areas, which include the renowned Kushiro Marsh, Lake Akan, and Lake Furen. Perhaps the biggest highlight, however, is the Natural World Heritage Site of Shiretoko Peninsula, along with the drift ice that floats over from the Sea of Okhotsk. This region is also noted for its diverse ecosystems, which includes an assortment of wild animals rarely seen anywhere else.

Once considered the gateway to Hokkaido, this southern region prospered through trade between mainland Japan back when native Ainu culture was booming and Hokkaido was known as “Ezo.” The region overflows with historical and cultural landmarks, including Hakodate, one of the first cities to open up to international trade together with Yokohama and Nagasaki, as well as the Goryokaku fortress, which acted as a battleground during the fierce final years of the Edo period in the late 19th century.

Spice Up Your Trip with Hokkaido History!

It is believed humans began to settle in Hokkaido during the Ice Age approximately 20,000 years ago. Unlike the farming culture that eventually flourished on the mainland, the freezing climate of Hokkaido forced its inhabitants to rely on hunting and fishing, allowing the prehistoric Jomon culture to continue in Hokkaido until around 2,000 years ago.

Up until it received its current name by the Meiji government in 1869, Hokkaido was originally known as “Ezo” and was inhabited primarily by the Ainu people. The Ainu were largely a society of hunters and gatherers whose rich culture prospered between the 13th and 19th centuries. The names of numerous towns and localities in Hokkaido come from the native Ainu language, including Sapporo and Tomakomai.

Inhabitants of mainland Japan slowly began to advance into southern Hokkaido from the 13th century. In 1869, full-scale immigration commenced through the Meiji government’s “kaitakushi” pioneering campaign, which was carried out by the “tondenhei” military settler colonists.

During this time, a distinctive Hokkaido way of life and accent was formed through the convergence of unique cultures, lifestyles, and languages brought from across Japan by the settlers. However, the pioneering and assimilation policies pursued by the Meiji government resulted in unjust land confiscation from the Ainu, destroying much of their culture and eventually resulting in a steep population decline. Nowadays, thankfully, interest in Ainu culture and language is increasing and sites related to Ainu history are seeing more and more enthusiastic visitors every year.

Half the Year Is Snow!? Understanding Hokkaido’s Peculiar Climate

Hokkaido’s climate generally ranges from freezing to cool, with summers short and winters long. Unlike most of Japan, there is no rainy season and very little impact from typhoons.

In terms of geography, the Pacific Ocean side sees comparatively less snow than the Sea of Japan side. The southern Donan region remains relatively warm year-round while temperatures stay low in the eastern Doto and northern Dohoku regions.

Even within Hokkaido, the different climates between individual localities are clearly pronounced. Those traveling large distances should research the weather of each destination beforehand and prepare appropriate clothing.

Let’s break down Hokkaido’s weather into each season!

While much of mainland Japan receives agreeable weather and the blooming of cherry blossoms by April, Hokkaido remains very chilly! In fact, the cherry blossoms of Hokkaido won’t even bud until May!

Springtime brings out white skunk cabbage (April-May), cherry blossoms (May), and moss phlox (May) in Hokkaido.

Unlike mainland Japan, summer in Hokkaido is largely free from the notoriously hot and sticky rainy season, making it a popular holiday destination to escape from sweltering cities like Tokyo. In contrast to Tokyo’s July average temperature of 25.0°C (77.0°F), Hokkaido hovers around a comfortable 20°C (68.0°F), with evenings and mornings often dropping down past a chilly 10°C (50.0°F). Days over 30°C (86.0°F) are rare; however, unusual weather patterns in recent years caused by global warming have seen the temperature steadily rise. As for the average precipitation, in July it is 81.0 mm in Sapporo and 108.7 mm in Asahikawa. Compared with 153.5 mm in Tokyo, this is, again, rather low.

Despite its fleeting length, summer gifts Hokkaido with a plethora of beautiful flowers between June and August. The pleasant warmth and pristine wilderness also offer a staggering range of fun outdoor activities to enjoy. For this reason, many consider summer the best season to visit Hokkaido.

Autumn sees a dramatic temperature drop in Hokkaido, with a particularly pronounced difference between mornings and evenings. Days below 0°C (32.0°F) could even come as soon as November! While autumn in Hokkaido has the most sunny days after spring, September suffers a significant heavy rainfall, making it the wettest month of the year. In contrast to Tokyo’s average October temperature of 17.5°C (63.5°F), Sapporo is 11.8°C (53.2°F) while Asahikawa is just 9.2°C (48.6°F). Average precipitation in Sapporo is 108.7 mm and Asahikawa 104.3 mm, which is much less than Tokyo’s whopping 197.8 mm.

Those traveling during autumn should bring a foldable umbrella and cold weather gear.

Winter in Hokkaido is long and unforgiving! From December to March, every inch of Hokkaido will freeze over, with average monthly temperatures well below 0°C (32.0°F).

Snow is generally observed in Sapporo as soon as November, with the much-anticipated Sapporo Snow Festival taking place during the peak snowfall of late January/early February. Central Sapporo will see between 70 - 80 cm of snowfall, while the mountainous regions will experience significantly more.

As a general trend, snow on the Pacific Ocean side of Hokkaido is less than that alongside the Sea of Japan. Surprisingly, winter daylight hours are long, and there are lots of sunny days. However, the Okhotsk area is occasionally prone to blizzards, so do be careful. Generally, ski resorts in Hokkaido will commence business between late November or early December.

Getting to Hokkaido From Tokyo

Hokkaido boasts over 10 airports, with the biggest—New Chitose Airport—welcoming over 50 flights from Tokyo's Haneda Airport every day. The journey from Haneda takes around 1.5 hours, with the fare usually being somewhere between 7,000 - 38,000 yen. Low-cost carriers occasionally offer cheap fares starting as low as 4,000 yen, so keep an eye out for those!

In addition to domestic flights, New Chitose Airport also offers international flights to dozens of countries. As Hokkaido’s largest airport, it holds the fifth highest annual passenger count in Japan (2019). With shopping malls, restaurants, theme parks, and even onsen (hot springs), there’s plenty to do while you wait! While boarding times are generally short, luggage handling and other procedures take time, so make sure to leave early!

Since the opening of the Hokkaido Shinkansen in 2016, travelers can now reach Hokkaido’s Shin-Hakodate-Hokuto Station directly from Tokyo Station. There are 10 return services running daily, with a standard seat costing 22,690 yen.

The trip takes approximately 4 hours, making it far longer than an airplane ride. However, unlike flights, which are often delayed or cancelled during bad weather, Japan’s bullet trains are extremely reliable.

As the sweeping scenery of Tohoku whooshes past the wide windows, travelers will be lulled into a relaxing daze as they absorb the sights of the Japanese countryside. With plenty of time to chow down on a bento box featuring local specialties and take a nap, the lengthy traveling time provides a welcome chance to unwind.

The vast, exhilarating northern island of Hokkaido forms a dynamic collection of starkly different weather, terrain, and activities. Each region offers equal, yet different types of fun, delighting the senses with unique foods, cultures, and attractions! Use this article to find an area that interests you and start planning your Hokkaido adventure today!