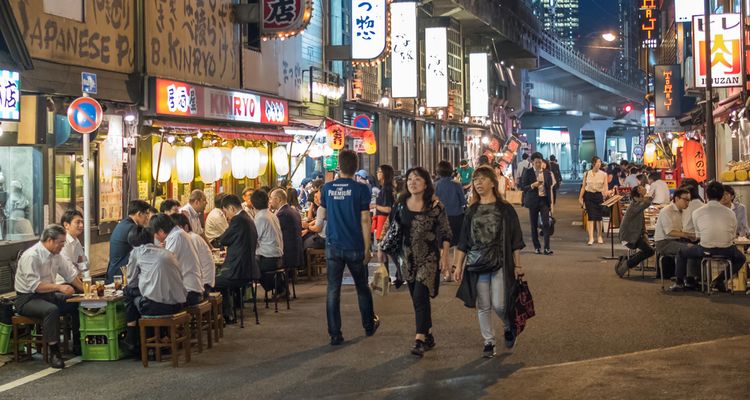 Whether you're a night owl, early riser, or just want to make the most of your limited time in Japan, 24-hour restaurants can't be beat! The 5 restaurants listed below are great for a variety of occasions, like passing the time after a night of drinking until the first train of the morning, or if you suddenly get hunger pangs in the middle of the night. Try to see how many you can visit while you are in Tokyo! This restaurant chain is attached to Sakura Hotel branches throughout Tokyo and is known as one of the best places in the city to go get some grub at any time of day. They serve a rotating menu of global cuisine, ranging from fish & chips to nachos, curry, and more! They also have over 60 international beers for you to choose from, so you can try a new brew each time you visit. One of their most famous dishes is the Hamburger Gratin (pictured to the right), which consists of a whole hamburger that's covered in white sauce and cheese and baked! They also have a robust dessert menu and offer Tea Time during lunch hours. With several locations in Tokyo, you will be able to visit one that best matches your location and needs. Each location has its charms, such as the Ikebukuro branch, which has a large terrace perfect for days with good weather, and the Nippori location, which has free Wi-fi. If you find yourself looking for a filling and cheap meal at a strange hour (or even a non-strange hour), Sagatani Soba is the place for you! They serve up delicious soba (buckwheat noodle) dishes for as little as just 290 yen! You can order a soba set that comes with side dishes, mix and match with a variety of options such as tempura chicken and pickles, or simply get a bowl or plate of soba by itself. The deals don't stop at the food either, as draft beer is a steal at 150 yen for a medium size. This is the perfect place to visit after a night of drinking while you wait for your train, but it is also ideal for a quick bite before work or in between meetings as well, as there is a bar for "tachigui-soba" (eating soba while standing up). Located in the middle of the super popular bar and club district of Roppongi, Chinese Cafe Eight is a favorite post-drinking destination for Tokyo residents and tourists alike. Don't be turned off by the cramped spaces and suggestive interiors, as this restaurant can turn out some seriously delicous food even in the wee hours of the morning. The highlight of Chinese Cafe Eight's vast menu of Chinese dishes has to be the Peking Duck, which is very affordable in addition to being supremely tasty. You can get a whole duck along with all the accompaniments for just 3,980 yen - perfect for sharing with a bunch of friends. The menu also includes some rare and wild dishes such as fried scorpion and silkworm! Give them a try if you're feeling brave!

You'll recognize Sushi Zanmai by the statue of Kiyoshi Kimura, also known as the "Tuna King," the eccentric owner of this renowned sushi franchise. He recently made the news for forking out over 330 million yen for the most expensive single tuna ever sold at an auction! However, there is a lot more to this sushi chain than its famous owner! The sushi itself is fresh and delicious, and there are so many locations within Tokyo that you'll never be too far away from some tasty nigiri or rolls for whenever your sushi craving strikes. In addition to sushi, you can also order tempura, rice bowls, and a host of other Japanese dishes. Sushi Zanmai operates both traditional order-style sushi restaurants as well as conveyor belt sushi, and most locations are open 24 hours.

While pizza, tacos, and kebabs are some of the go-to choices for late-night eats in the West, when it comes to late-night dining in Japan, ramen is king! There are countless ramen shops to be found that are open until the early hours of the morning. Among them, Yaro Ramen is our top recommendation! This place is known for its bowls of hot ramen piled high with moyashi (bean sprouts) and slices of tender char siu. Sometimes there are so many toppings that you can't even see the noodles and broth underneath! If you're up for a challenge, you can order the Mega Buta Yaro Ramen, which is covered with an almost unbelievable amount of toppings. Another fascinating aspect of this ramen joint is that they offer a subscription payment option, where you can pay a flat monthly fee of 8,600 yen for up to one ramen per day.

In addition to the restaurants listed above, there are dozens of family restaurants and fast food establishments in Tokyo and around Japan that are open 24 hours as well, such as Jonathan's, Denny's, McDonald's, and more!

Check out the article below to find out all about Japanese family restaurants, or "famiresu"!