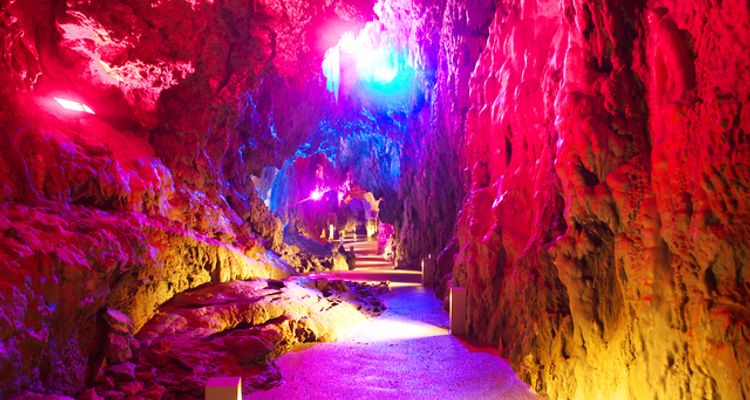 There are places not so popular to be on top of guidebooks as touristic destinations, but appreciated among those in the know. Visiting these places will make you an expert on Japan, more than any normal Japanese! Especially for second, third, fourth... time visitors, why not put some of them on your list for visit? Built in 1936, this church-gallery looking breakwater dome was used as the transit station to the old Sakhalin sea route and protected trains from strong winds and waves. Though it was used as a station only for nine years, the dome is a symbol of the old Sakhalin route and still protects the city of Wakkanai. The arch is 427m-long, 13.6m-hight, and supported by 70 Roman style pillars. Ryusendo Cave is one of Japan's three great limestone caves in Iwate prefecture. The entire cave is estimated to spread over 5,000m. The 700m of 3,600m explored area is open to public. Three of eight underground lakes are also accessible. Each are 35, 38, and 98m deep. The water gush from the area is so clear that you can see the lights hang deep under the surface. The Fukuware falls in Gunma offers a spectacular view. The 30m width and 7m height fall is formed by the different compositions of riverbed. The water gush down from three different direction can be viewed closely from the bedrock. The area looks beautiful especially in the autumn foliage season. It looks like ancient ruins in Egypt or somewhere around the area, but it's an old underground stone quarry in Gunma, Japan. The Oya stone used to be utilized for constructions before concrete became popular. The famous example is the old Imperial Hotel in Tokyo designed by Frank Lloyd Wright. It is said that about 900,000 tonnes of stones were mined a year in the 1970's. This cool museum is now used for shooting or concerts. It's actually cold as the average temperature is 8 degree throughout the year. The Aogashima Island is a part of Tokyo. It's located in the Philippine Sea, 358km south from Metropolitan area, two hours by flight if you are lucky. You take a flight or a ferry to the Hachijojima Island first, then change to a helicopter or a boat to get here. Actually, schedules of transportation can change easily due to its remote location and topography. This 9km-periphery volcanic island is still active, but have 170 habitants. There are almost nothing, but rich nature which  attracts the visitors. This odd-looking building is located close to Ginza. Designed by Japanese architect, Kisho Kurokawa, it consists of exchangeable capsules for residential-use. This was the world's first example of capsule architecture. Over 40 years have passed since its construction and some capsules are deteriorated, while a part of 144 rooms still have tenants using it as office or residence. Yagura are tombs tucked in artificial caves. They are mainly made during the Middle Ages when the Kamakura area flourished as the capital. This area spreads along narrow valleys and lacked the space to build tombs on the surface, which is why they were made in caves. Some of yagura's interior seemed to have been decorated beautifully. Though they are not popular, you can find some of them near touristic spots like the Kenchoji temple and Zeniarai Benten. Oigawa Railway is a scenic line running along the Oi River. This 39.5 m-long line is popular among railway fans for the locomotive trains and a rack railway. The former includes classic carriages imported from abroad. The latter runs the upper reach of the river including the Japan's steepest gradient. It's exciting to watch the view of each season from a train window. This village is located on the steep-sided hill with a lean of 38degree, at the altitude of between 800 and 1100m. Its extraordinary setting is said to have inspired one of the Studio Ghibli films. Thanks to its extreme temperature difference caused by the location, they produces good quality agricultural products. If you go up to the top of the mountains, you can see things from different perspectives. Mt. Shirouma, 2,932m above sea level, is located in the northern part of the Japan Alps, both in Nagano and Toyama prefecture. The peak area is one of most popular spots among hikers for its spectacular view with year-round snow fields and flower fields in its short summer. This is a place for people who love climbing. Akame 48 waterfalls can be distinguished from others in Japan for its numerous waterfalls. The 4km-long path along the river offers a refreshing walk in the forests with more than 48 waterfalls. Five of them are especially popular for the breathtaking view. You can enjoy views of various waterfalls in size and in shape. The walk through the path with the sound of water running is great in every season. If you adore the atmosphere of somewhere sacred, Koyasan or Mt. Koya in Wakayama is a place to go. As the home of a sect of Japanese Buddhism with a history over 1000 years, the most parts of mountain is dedicated to religious facilities such as temples and graveyards. To breathe in fresh cool air on the morning, a overnight stay is strongly recommended. The Takeda castle ruins at altitude of 353 m, built in the year 1441 is known as the "Castle in the Sky." On an early morning, especially in autumn, the area sitting on the summit of a mountain looks like it's floating in the sky surrounded by a sea of clouds. The area is also a great place to see the changing colors of nature- cherry blossom in spring and the bright foliage in autumn. The Tsujunkyo Bridge is the Japan's largest stone-arch aqueduct bridge constructed in 1854. The area suffered from serious water shortage, and the officials and the local people constructed it together. With a 75m length and a 22m height, this bridge using the natural principles of a siphon, is still in use today to irrigate over 100 ha of fields. Water is occasionally released from the bridge to clear the pipes. Hashima, 15km from the city of Nagasaki, is better known as Gunkanjima (meaning Battleship Island) among Japanese due to its profile. And it is known worldwide as the model for the "Dead City" in Skyfall (2013). It is on the UNESCO World Heritage Sites lists as a part of industrial heritage. It once flourished as a base of coal mining, but it has been abandoned since 1974 when the mines closed. Now you can visit the ruins with boat tours.