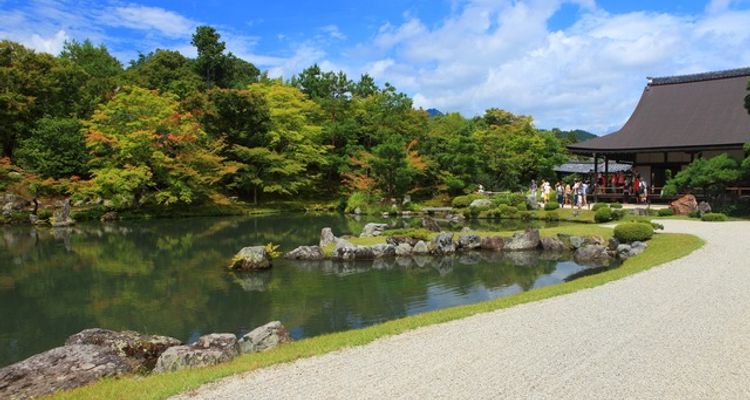 11 Must-Visit Japanese Gardens All Over Japan

The beauty of Japanese gardens is definitely a motive to visit Japan. Garden design is an important part of Japanese art and culture which evolved into various styles according to purpose and the social needs. Here listed are fine examples to enjoy the unique aesthetic of Japanese gardens. This picturesque garden in Kanazawa is one of the most beautiful Japanese gardens in Japan. It was built by a powerful local feudal lord in the Edo period and had been maintained carefully by the family for generations. This garden, featuring the flow of water, has Japan’s oldest fountain using natural pressure. The relaxing beauty of nature entertains its visitors from all over the world. This Zen-style garden in Shiga was designed by a famed garden designer, Kobori Enshu. Neatly trimmed azalea shrubs suggest a treasure ship among the waves in the sea. Okarikomi, trimmed shrubs, became popular in Japanese gardens especially in the Kyoto region after the 16th or 17th century. This technique was apparently adopted by Enshu after he was inspired by the picture of Versailles Palace in France.

This garden, which was built in 1339 and has survived over the centuries, was designed by Muso Soseki, a Zen priest who was also a famous garden designer and the first head priest of the Tenryu-ji Temple. The layout of the garden shows an example of an early Japanese garden. It includes a water garden featuring ponds where people can enjoy the promenade on foot or by boat, as well as a and replica of scenic natural beauty utilizing its surrounding Arashiyama mountains as a backdrop.

This garden is one of the finest examples of a Zen-style rock garden. It’s composed of white sand and fifteen rocks. Although the meaning of the layout or facts concerning this garden are unclear, visitors are supposed to see the garden from a terrace. If you try to count the number of rocks, it seems like it's fourteen since one stone is hidden behind others. The arrangement is apparently to suggest imperfection while fifteen is considered a perfect number.

Saiho-ji Temple in Kyoto is better known as 'the moss temple’ as the garden is covered with over 120 varieties of moss. This was not what was originally intended by the garden designer, Muso Soseki. It is said that the garden became covered with moss after the end of Edo period. This garden is located on the slope of a mountain, so visitors can enjoy a three-dimensional stroll.

The garden of Entsu-ji Temple in Kyoto is a good example of a Japanese garden technique called borrowed landscape. Trees are arranged and trimmed to create the desired perspective featuring Mt. Hiei. Built on the site of a former imperial villa, the former emperor himself was said to have played a main part in designing the garden.

This villa is a fine example of pure Japanese architecture and the circuit style garden is described as a masterpiece of a Japanese garden. Built by a member of the royal family and expanded by two generations, this garden incorporates a variety of styles. The views were created in harmony using the composition of nature, artificial objects, and structures.

The structures in Tofuku-ji temple in Kyoto suffered several fires and the current main building was reconstructed in 1890. The four gardens arranged around the main building was newly designed in 1939. The impressive diced stones in the north garden were originally used in the pavement of the former structure. The checkered pattern was a popular motif used in Japanese textiles long ago. The autumn foliage at this temple is breathtaking. This garden in Okayama is one of the best gardens in Japan. The combination of ponds, hills, rest facilities, and the background of a castle and surrounding mountains offers the visitors a variety of views to be enjoyed. It was built by the local feudal lord in the late 17th century as a place of entertainment. Since then, the lords of the ruling families made minor changes for each generations to suit their preferences. Lawns were adopted in 1771 to reduce maintenance costs. This Kagawa prefectural park is said to be one of the most beautiful gardens in Japan. It dates back to the 17th century, and was developed by local feudal lords until the mid-18th century. The 75 hectare garden combines many styles, including a promenade garden, Zen rock garden, and a semi-western garden with the borrowed landscape of Mt. Shiun. You can enjoy strolling around or relax at the teahouse beside a pond. This museum in Shimane, founded by a successful businessman from the region, is well-known for its beautiful garden. The main purpose of the garden is to help visitors better understand the artworks exhibited since it is mainly Japanese art featuring the beauty of nature. For that reason, the garden is designed to look best through the windows of museum and only a few parts are open to pedestrians.